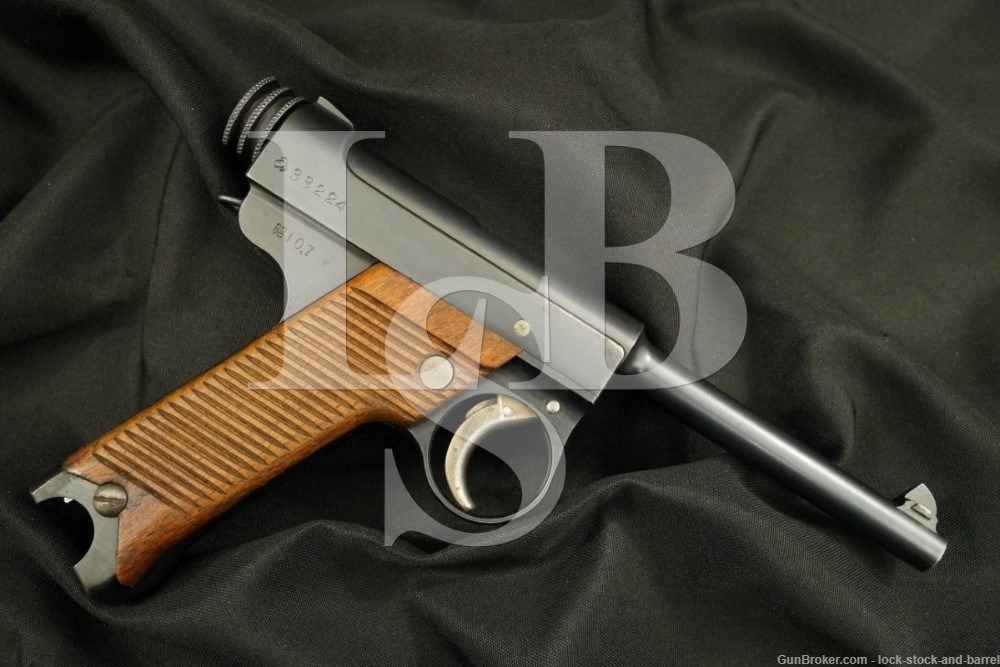 Sights / Optics: The front sight is a blade dovetailed into a base on the barrel. The rear sight is a square groove milled into a raised boss on the back of the frame.

Stock Configuration & Condition: The grips are two-piece wood panels which each have 25 horizontal serrations. The grips have light handling wear with some scattered light nicks, scuffs and scratches. The wood shows thinning finish and discoloration from handling. There is a defined arc of wear at the top-front of the left panel from the safety lever. There are no chips or cracks. The serrations are well defined. Overall, the grips are in about Very Good condition.

Type of Finish: Blued, some small parts are Strawed

Bore Condition: The bore is mostly bright with sharp rifling. There is infrequent light erosion in the bore, mostly at the muzzle-end.

Overall Condition: This handgun retains about 95% of its metal finish. The finish is thinning at most edges. Most of the balance is in handling wear on the controls. There is some scattered minor surface oxidation, mostly in the grip areas. There are a few light nicks, scuffs and scratches. There is an arc of wear around the safety lever. The action shows minor operational wear. The screw heads are tool marked with strong slots. The markings are clear. Overall, this pistol is in Very Good-Fine condition.

Box, Paperwork & Accessories: None. Please note, this pistol does not come with a magazine.

Our Assessment: This is a Nambu Type 14 pistol made by the Tokyo Arsenal. The Type 14 was built between 1925 and 1945 for the armed forces, and almost all of the Japanese pistols and revolvers used unique cartridges. The 8mm Nambu is a bottleneck cartridge that pushes a 102 gr. bullet at a little over 900 fps. and has approximately the same power as a .380 ACP cartridge. This example was made in 1935, but still looks great with the great majority of its original finish, serial-matched parts and a pretty nice bore. This is fairly surprising given Japan’s activities in the era. While most people think of WWII starting in 1939, the Japanese had invaded Manchuria in 1931 and established the Manchukuo puppet state. In 1937, they would further expand their invasion of the Chinese mainland and would see constant conflict on the continent until the end of WWII. Perhaps this pistol first being issued in the lull between the initial invasion and the start of the Second Sino-Japanese war accounts for the high condition, but given what Japan would do in the following decade, it’s still in surprisingly great shape. This will make a nice addition to a Japanese small arms collection. Please see our photos and good luck!