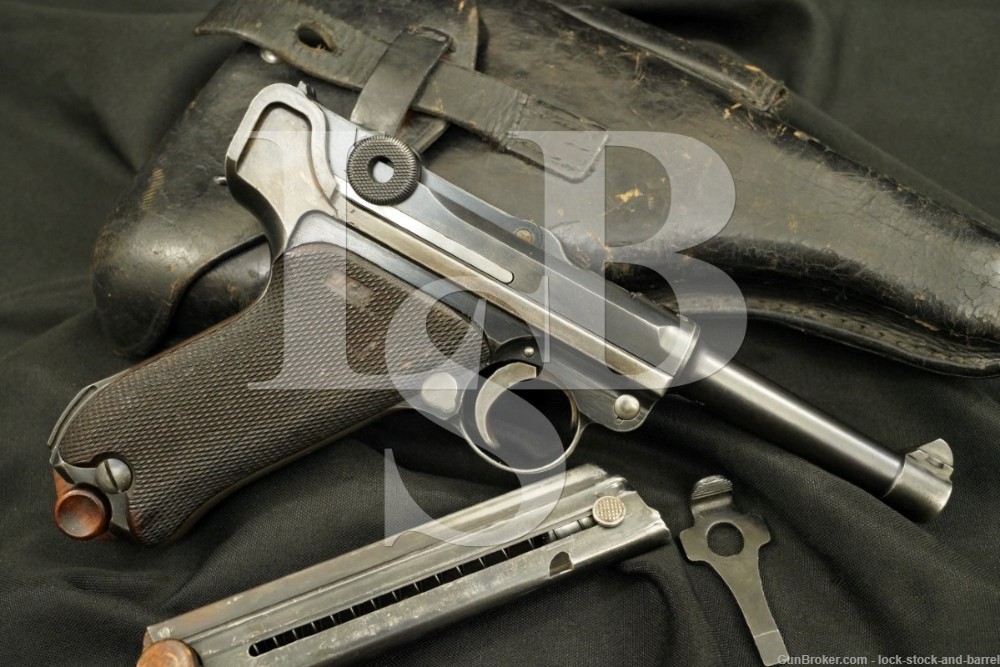 Markings: The barrel extension is marked “1920 / 1916” on the chamber ring, the left is marked with a crown and two crowned “M” German Navy inspection marks. The left frame rail below this is marked “1916”. The sear is marked “80”, found again on the trigger, sideplate, safety, bolt stop, takedown lever, the top of the extractor, top of the front toggle link, and the rear of the back toggle link. The left of the bolt is marked “480” and with a German Imperial Army eagle inspection marking. The toggle pin is not serial marked. The takedown lever and sideplate have commercial-placement serial markings. The top of the front link is also marked with a “DWM” logo. The left of the extractor is marked “GELADEN”. The front face of the frame is marked “2480”. The top-rear of the barrel has an incomplete marking. The bottom of the barrel is marked “2480 / 8.82”. The locking lug on the bottom of the barrel extension is marked “80”. The frontstrap is marked “S. H. 487.”, a Prussian Hannover police marking (Schutzpolizei Hannover).

Stock Configuration & Condition: The grips are two-piece checkered walnut panels. The grips show light-moderate handling wear with some nicks, scuffs and scratches. The right panel has a more notable, deep compression which is rectangular and has fairly crisp edges. Most checkering is well defined, some is compressed. There are no chips or cracks. Each panel has minor play to the frame. Overall, the grips are in about Good-plus condition.

Finish Originality: Refinished, some parts have been replaced and/or force-matched, likely when the pistol was re-worked for Police use (see Our Assessment).

Overall Condition: This pistol retains about 60% of its current metal finish. The finish is thinning at all edges. There is scattered finish wear, most notable in the frontstrap, the flat on the left of the frame above the grip, and along the top-right of the frame. The strawed parts have mostly worn to white. There are some scattered light nicks, scuffs and scratches with infrequent surface erosion. The action shows operational wear. The screw heads are tool marked with strong slots. The markings are generally clear, some of the inspection/acceptance marks are worn and incomplete. Overall, this pistol is in Good-plus condition.

Mechanics: The action functions correctly. There is minor play between the barrel assembly and frame. We did not fire this pistol. As with all used firearms, a thorough cleaning may be necessary to meet your maintenance standards.

Box, Paperwork & Accessories: This pistol comes with a black leather flap-holster, Luger tool, and a total of two magazines. The rear of the holster is marked “7635”. The holster shows moderate wear. There are stitch holes on the back which indicate that the belt loops have been replaced. The pocket on the inside of the flap for the tool has nearly broken free from the flap. There are tears at the bottom of the spare magazine compartment. The pull-string is missing. The magazines show scattered wear and some surface oxidation. One has some shallow dents on the left along the front edge which do not interfere with the follower. The magazines have intact feed lips and strong springs.

Our Assessment: The Luger was adopted by the German Army in 1908 and was so reliable and well liked that it was still being made and issued to German troops well after the P38 was adopted by the army in 1938. The largest percentage of Lugers were made by DWM, which became Mauser in 1930. This is a Luger pistol which was most likely produced during the Great War and which remained in German inventory following the Great War. Its “1920” marking on the chamber ring is a reference to compliance with the severe restrictions placed on Germany by the Treaty of Versailles. It has some interesting features which make it a bit of an odd piece. Due to the restrictions on the quantity of arms which could be maintained by the German government, including police forces, many P.08s were re-worked to keep the pistol in good working order rather than being decommissioned. This pistol’s barrel extension has markings indicating it was originally assembled for the Imperial German Navy while its bolt has an Imperial Army inspection mark. The serialized components all match and this pistol is marked as being issued to the Hannover Schutzpolizei some time between 1922 and 1933. The pistol apparently was not in police service by the time the common police safety features had been introduced, so it was not modified for a sear safety or magazine disconnect. For fans of the Luger, this pistol’s interesting mix of features and Hannover police marking will make a nice addition to a collection. It should also still make for a fun shooter. Please see our photos and good luck!