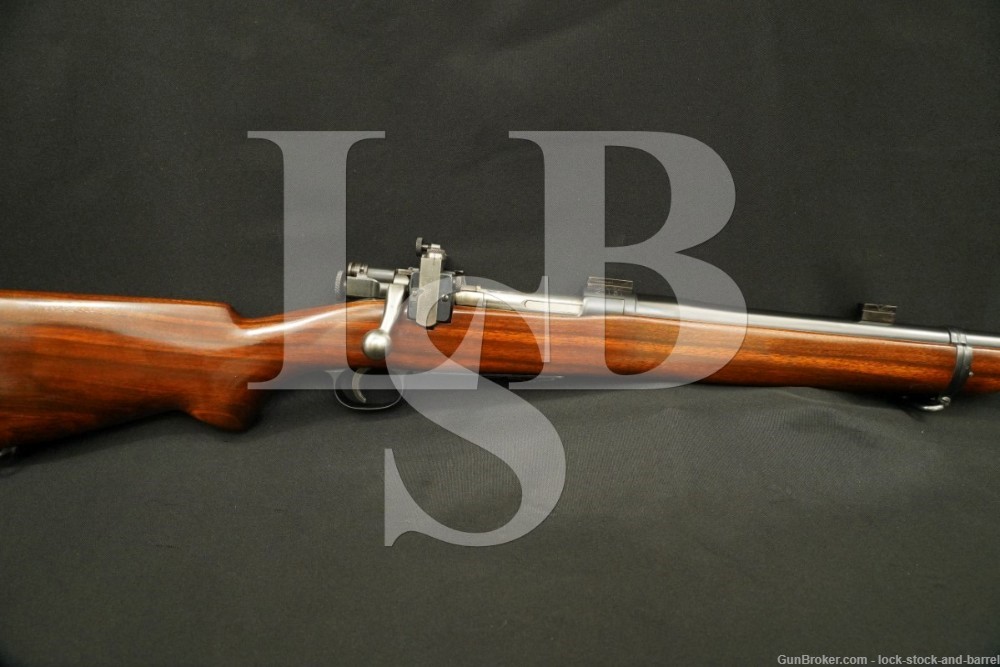 Model: 1922M1 NRA. The 1922M1 “NRA” model was sold to the public through the Director of Civilian Marksmanship (DCM). The 1922M1 “Issue” was provided to military services.

Sights / Optics:  The front sight is a pinned blade atop a raised base. The rear sight is fully adjustable Lyman aperture marked “0 25 50 75 100 125”. Scope blocks are attached to the rear of the barrel and top of the receiver by 2 screws each.

Stock Configuration & Condition: The hardwood stock has a pistol grip, barrel band, 2 sling loops, and a checkered metal buttplate. The buttplate shows discoloration from oxidation and some light surface erosion. The wood shows various scuffs & light scrapes as well as light handling marks. The LOP measures 13 ? inches from the front of the trigger to the back of the buttplate. The stock rates in about Fine overall condition as refinished.

Bore Condition: The muzzle and grooves semi bright. The rifling is crisp. There is some light intermittent erosion in the grooves near the muzzle.

Overall Condition: The rifle retains about 95% of its metal finish. The bottom metal shows patches of oxidation and light surface erosion. The front sight band shows scrapes & thinning. The remaining metal shows scuffs & light handling marks. The screw heads show heavy use. The markings are deep. Overall, this rifle rates in about Very Good Plus to Fine condition.

Box, Paperwork & Accessories: The rifle comes with a 5 round magazine. The magazine shows light scrapes. It is in about Fine condition.

Our Assessment: The Model 1922 series of rifles were designed to mimic the full size Springfield Model 1903’s. They were chambered in .22 LR. The goal was to give soldiers trigger time on a Springfield 1903 without the expense of .30 Caliber ammo. Many 1922s were used for competition shooting. The Springfield 1922, 1922M1, and M2 have become desired collector’s pieces. These rifles are a rare find. Any of them will add nicely to your Military collection.
This Springfield 1922M1 NRA was made back in 1931. It is in great shape for its age. The rifle has nice clear markings on the metal which add to its history. The deep blue metal looks great set in the refinished stock.
Two model 1922M1 rifles were produced by Springfield, the “NRA” and the “Issue”. The 1922M1 “NRA” model was sold to the public through the Director of Civilian Marksmanship (DCM). The 1922M1 “Issue” was provided to military services. The NRA model has an NRA style buttstock & buttplate and was made without finger gloves on the sides of the forearm. The NRA model also had the barrel & receiver drilled for scope blocks. For more info see page 281 of William Brophy’s book, The Springfield 1903 Rifles. Good luck.