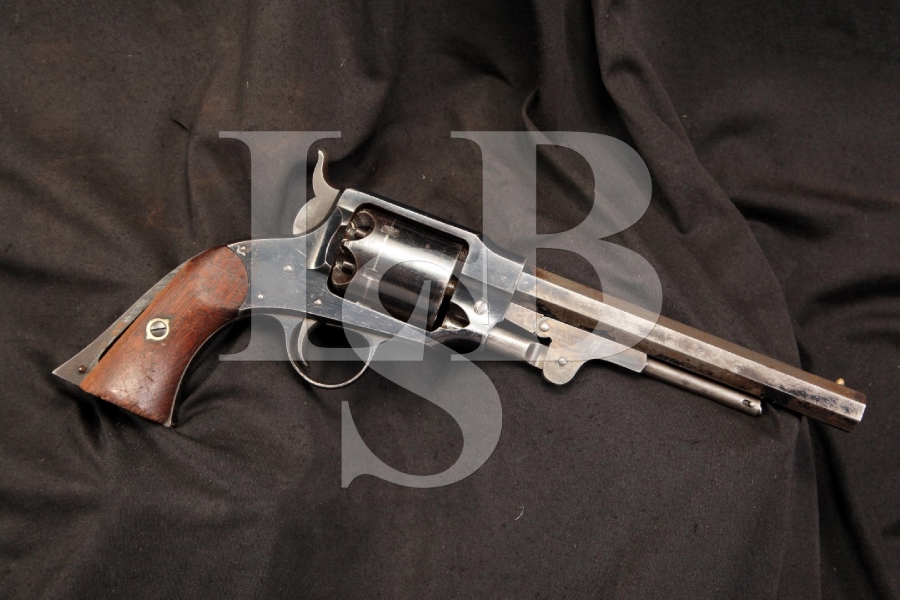 Make: Rogers & Spencer Model: Army Model Serial Number: 2017 Year of Manufacture: 1865 Caliber: .44 Cap and Ball Action Type: Single Action Percussion 6 Shot Revolver Markings: The top strap is marked “Rogers & Spencer / Utica, N. Y.”. The left side of the frame is marked “2017”. The left side of the hammer, left side of the frame behind the recoil shield, left side of the frame in front of the cylinder, left side of the barrel at the frame, the front tab of the trigger guard and the left side of the loading lever are all marked with the inspection mark “B”. The circumference of the cylinder is marked “B” in two places and “2017”. The underside of the frame in front of the trigger guard is marked with an inspection mark in the shape of a shield. The bottom of the left grip is marked with a “RPB” cartouche (R.P. Barry, Capt. USA, Sub-Inspector for Remington, Starr, Rogers & Spencer Revolvers 1860-1865). Barrel Length: The octagon barrel is 7 ½” in length. Sights / Optics: The front sight is a brass mortised cone. The rear sight is a “V” groove in the top strap. Stock Configuration & Condition: The grips are smooth walnut. The rear edge of the right grip has broken off and is missing. The grips both show multiple compression marks with 2 chips and wear marks along the bottom edge of the left grip and compression marks and wear marks on the bottom of the right grip. The grips rate in about Poor overall condition. Type of Finish: The pistol is blued with a case colored loading lever, hammer and trigger. Finish Originality: All Original Bore Condition: The bore is bright and the rifling is sharp. There is light erosion in the front 1/3 of the bore. Overall Condition: This handgun retains about 40% of its metal finish. The barrel shows surface loss and thinning, and is developing a brown patina. The frame shows handling marks, thinning on its edges, scratches around most of the screw heads and a few small compression marks. The cylinder shows handling marks, spots of pinprick surface erosion, surface frosting, thinning, and a drag line through its finish. There are compression marks on the ribs between the nipples from being hit with the hammer. The grip frame shows thinning and handling marks, with compression marks on the front strap and surface frosting on the backstrap. The screw heads are sharp except for the cylinder pin screws, which are disfigured. Overall, this handgun rates in about Good condition, and would rate much higher if it weren’t for the broken grip and missing barrel stud. Mechanics: The action functions correctly. The cylinder lock-up is SOLID on all six chambers. However, the barrel is missing the barrel stud (for latching the loading lever) that is supposed to be dovetailed into its underside – the dovetail is empty. We did not fire this handgun. Box, Paperwork & Accessories: None. Our Assessment: This is a rare Rogers and Spencer Army Model revolver with U.S. Army inspection marks. It was one of 5000 revolvers made for the U.S. Army in 1865, but never issued. They were eventually sold by the Army to a distributor, and another 800 revolvers were made for civilian use. Prior to making these revolvers, Rogers and Spencer had made Pettengill percussion revolvers of Pocket, Navy and Army sizes. This revolver has seen some use – but you would never know it from the action. The cylinder lock-up is SOLID on all 6 chambers and the trigger pull is crisp. Although there is a little bit of erosion in the pockets around the nipples, the nipples remain in Fine condition. Even the rifling in the bore remains sharp. This revolver retains about 40% of its original finish, and would normally rate Very Good to Fine condition. However, the barrel stud is missing from its dovetail on the underside of the barrel and the back half of the right grip has broken off and is missing. This revolver is sure to catch the eye of a serious collector. With only 5000 made and this revolver still retaining inspection marks on just about every part including the left grip, it will not go unnoticed.