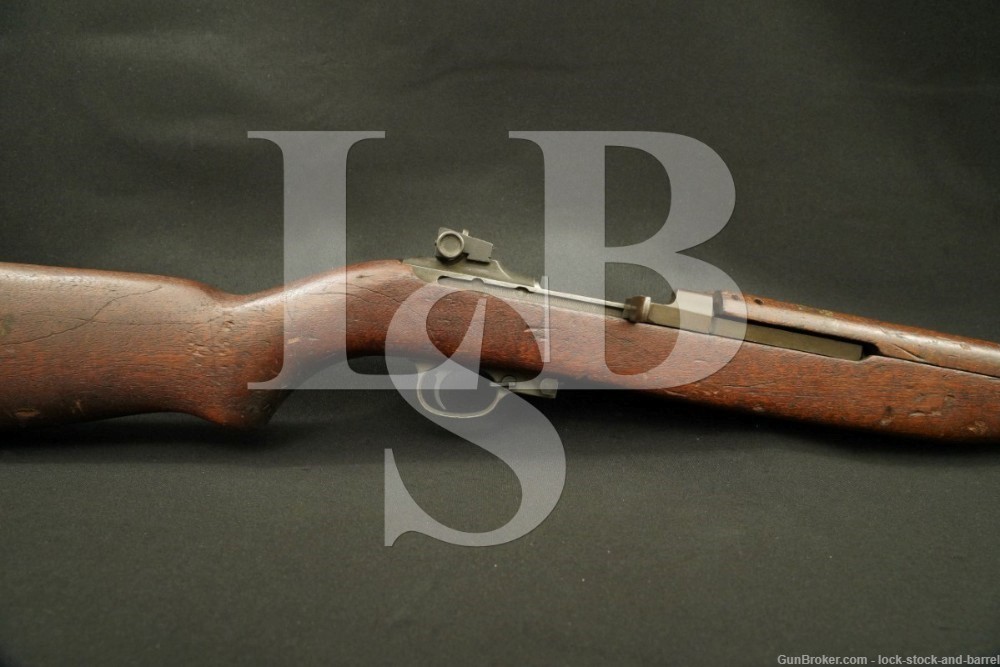 Stock Configuration & Condition: The stock has a pistol grip, Type II barrel band with sling loop, sling well, sling pass through, and a metal buttplate. The buttplate shows small scratches, small dents, and light surface erosion. The barrel band shows scrapes & discoloration from oxidation. The front of the handguard is missing a piece of edge wood. The wood shows numerous scrapes, scratches, and compression marks. Several of the marks have damaged small portions of the surface wood. The bottom of the grip and right side of the butt have been sanded.The LOP measures 13 ? inches from the front of the trigger to the back of the buttplate. The stock rates in about Good to Very Good overall condition.

Bore Condition: The muzzle and grooves are light gray. The rifling is sharp. There is fouling and intermittent erosion in the grooves and at the muzzle. The fouling should clean up some. The bore shows an M.E. of 2.2.

Overall Condition: This rifle retains about 85% of its metal finish as refinished. The metal shows scrapes, scratches, and areas of thinning. These marks are also under the wood. The finish on the barrel is uneven and some portions appear to have a texture. There is discoloration from oxidation and oil residue under the barrel band. The exposed portion of the barrel shows discoloration from oxidation. The right side of the receiver shows thinning consistent with cycling. Most of the markings are deep. The barrel markings are well defined. Overall, this rifle rates in about Good to Very Good condition as refinished.

Box, Paperwork & Accessories: There is NO magazine.

Our Assessment: The M1 Carbine was developed and produced after WWII started. Over 6 million were made by a number of U.S. companies to assist with the all out war effort. The M1 Carbine was widely issued to U.S. Military Forces which numbered over 16 million during WWII. The M1 Carbine contributed greatly to U.S. efforts during WWII.
The Inland Manufacturing Division of General Motors was organized in 1922 for the manufacturing of steering wheels. During WWII Inland Division was one of many facilities that tooled up to manufacture M1 Carbines for the war effort. Inland produced the majority of WWII M1 Carbines, about 43%, and contributed greatly to the war effort. Inland M1 Carbines were used by millions of soldiers during WWII in numerous battles. If you see WWII footage that includes an M1 Carbine, it is most likely an Inland M1 Carbine.
This Inland M1 Carbine was made back in 1944. After WWII it served for a U.S. friendly country and was eventually imported back into the U.S. for sales to the civilian market. It is marked accordingly on the barrel. This WWII era service rifle has seen some use but it can still ring steel and slay pater out at the range. Good luck.