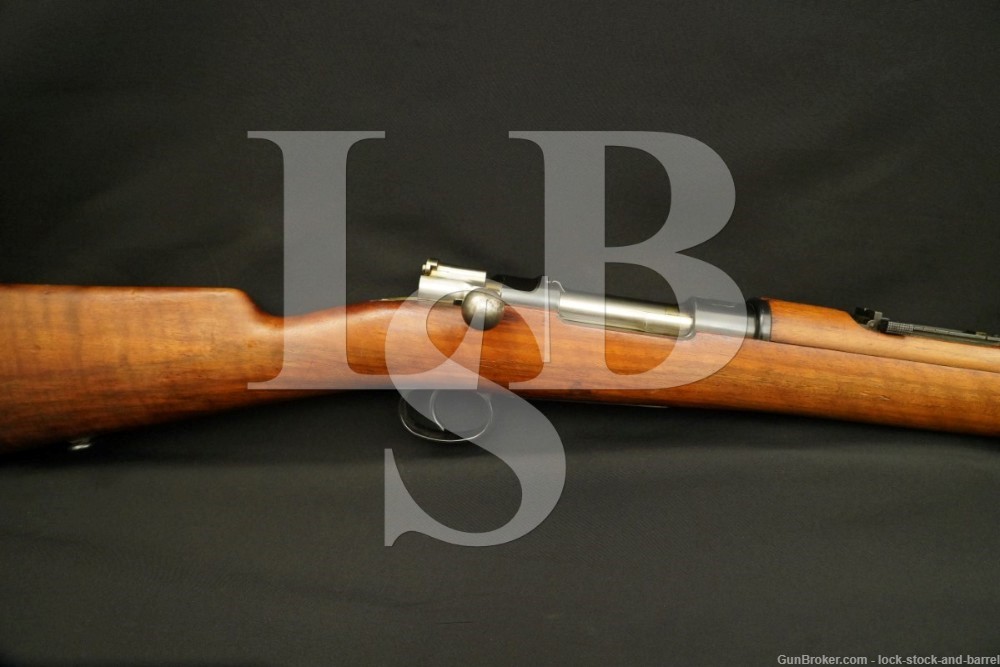 Stock Configuration & Condition: The two piece hardwood stock has a straight grip, nosecap with bayonet lug, hole for the included cleaning rod, barrel band, 2 sling loops, and a metal buttplate. The buttplate shows scrapes, thin scratches and discoloration. The wood shows several scrapes, scratches and compression marks. Some of the marks have damaged small areas of the surface wood. The LOP measures 13 ? inches from the front of the trigger to the back of the buttplate. The stock rates in about Very Good Plus to Fine overall condition as an antique.

Bore Condition: The lands are bright, the grooves are semi bright, and the rifling is deep. There is light fouling and oxidation in the grooves near the muzzle. The fouling should clean up some.

Overall Condition: This rifle retains about 97% of its finish. The metal shows scuffs, small scrapes and some thin scratches. The screw heads are intact. The markings are deep & crisp. Overall, this rifle rates in about Fine condition as an antique.

Our Assessment: This Chilean Model 1895 Mauser is over 120 years old and looks great for its age. It must have spent a long time in storage. It was made in Germany as a contract rifle for Chile before Loewe and Company formed Deutsche Waffen-Und Munitionsfabriken (DWM). Model 1895’s made by Loewe are antiques; those made by DWM may not be antiques as many were made by DWM after 1898. This Chilean Mauser has deep crisp markings that include Chilean crests on the receiver & stock as well as matching numbers on the receiver, stock, bottom metal, bolt handle, and cleaning rod. This rifle is an antique so no FFL is required…unless you live in California. Good luck.