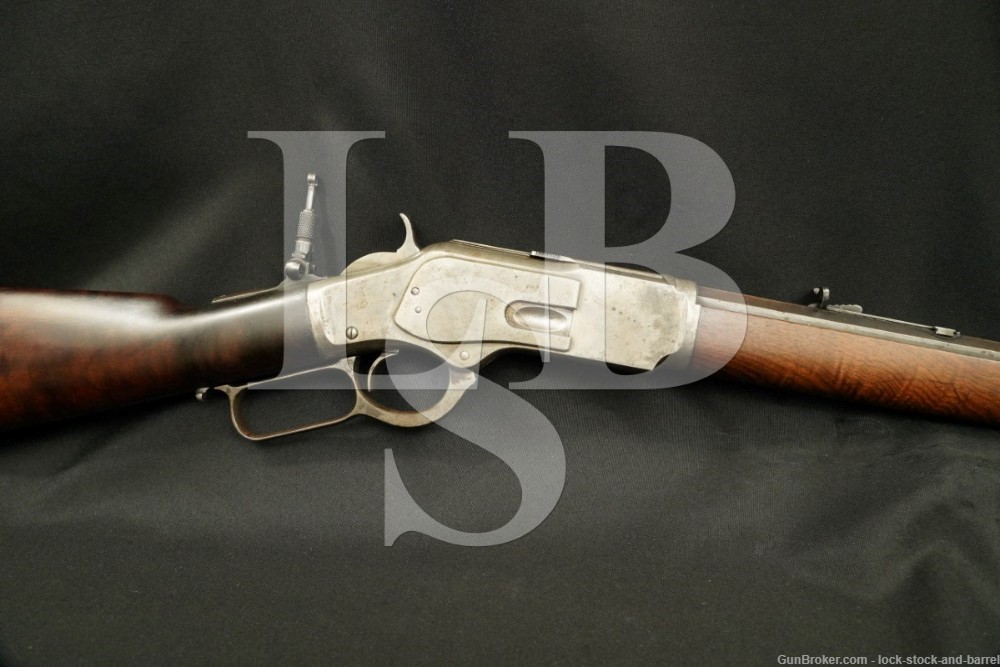 Sights / Optics: The front sight is a combination beach sight that, when flipped down, is a fixed blade and when flipped up, it is a globe with a post. The rear sight is a buckhorn U-notch elevator sight that is dovetailed to the top of the barrel. The tang is equipped with a folding elevation adjustable peep aperture sight.

Stock Configuration & Condition: The stocks are two-piece smooth walnut with a capped forend, straight grip, straight comb and steel carbine-style buttplate. The stocks have scattered nicks, scuffs and scratches. The wood has darkened around the wrist from age and handling. There are no chips and cracks. The LOP measures 12 5/8? from the front of the trigger to the back of the buttplate. The plate has a mottled appearance, showing some light erosion wear, nicks and scratches. Overall, the stocks are in about Fine-Plus condition as Antique.

Bore Condition: The bore is somewhat bright with well defined rifling. There is notable erosion and some pitting in the bore, mainly in the middle.

Overall Condition: This rifle retains about 30% of its metal finish. There is thinning on the leading edges of the barrel. There is scattered erosion and light pitting throughout the barrel and receiver. The heaviest erosion is on the lever. The case coloring has mostly gone mute but trace amounts can be seen. The majority of the remaining finish is on the barrel. There are nicks and scratches throughout. The screw heads range from sharp to slightly disfigured with strong slots. The markings are clear. Overall, this rifle is in about Very Good condition as Antique.

Our Assessment: One of the most successful, and certainly one of the most famous Winchester rifles was the Winchester Model 1873, known as “The Gun that Won the West” for its predominant role in the hands of Western settlers. The Model 1873 had a steel frame that was much stronger than the brass framed Model 1866, allowing Winchester to develop a family of powerful new cartridges, with Colt usually producing Single Action Army revolvers in the same calibers shortly after they were developed. The .32-20 Winchester, also known as .32 WCF (Winchester center fire), was the first small-game lever-action cartridge that Winchester produced. It was initially introduced as a black-powder cartridge in 1882 for small-game, varmint hunting, and deer. This would make a great addition to a Winchester or early cartridge rifle collection, and will display well with its “been there, done that” appearance. Please see our photos and good luck!