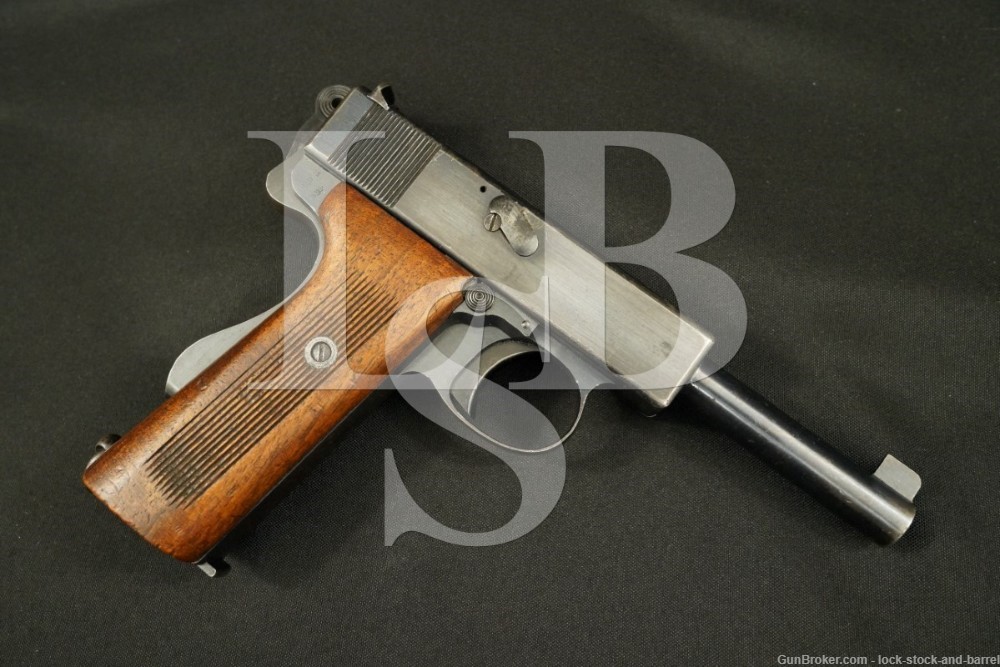 Sights / Optics: The front sight is a blade forged to the front of the barrel. The rear sight has a “U”-notch at the bottom of a wide “V” dovetailed to the rear of the slide and adjustable for windage with a set-screw to secure it in place.

Stock Configuration & Condition: The grips are two-piece serrated wood panels. The grips have light handling wear with some scattered nicks, scuffs and scratches. The right panel has some light play to the frame. The serrations are well defined, notably deeper at the bottom on the right panel. There are no chips or cracks. Overall, the grips are in Very Good condition. We have seen other examples with the same configuration grips, but they appear to be service replacement grips, not the original panels.

Bore Condition: The bore is semi-bright with sharp rifling. There is some scattered light erosion and minor pitting, mostly in the grooves.

Overall Condition: This pistol retains about 75% of its metal finish. The finish is thinning at all edges. There are several scattered light nicks, scuffs and scratches, most notable are tool marks on and around the takedown lever on each side of the slide. The frontstrap, grip safety and other controls show handling wear. There is minor surface oxidation scattered throughout. The screw heads are tool marked with serviceable slots. The markings are clear. Overall, this pistol is in about Very Good condition.

Mechanics: The action functions correctly. This pistol has a grip safety. The magazine can be seated at two positions, the lower position allows for singe-loading and the slide will lock back after each shot. With the magazine seated fully, the action functions semi-automatically. The trigger has a little bit of creep before the sear breaks. We have not fired this pistol. As with all used firearms, a thorough cleaning may be necessary to meet your maintenance standards.

Box, Paperwork & Accessories: This pistol comes with a single 7-round magazine. The magazine has light wear, infrequent minor oxidation, intact feed lips and a strong spring.

Our Assessment: As the United States was going through trials which would result in the adoption of the Colt 1911, the British military began looking into adopting a self-loading pistol, as well. The Army was skeptical of semi-auto pistols and was determined to stick to their revolvers, but the Royal Navy was interested in adopting a new sidearm and William Whiting was interested in getting his pistol design adopted by the military. After a series of trials the Royal Navy adopted the Pistol Self-Loading .455 Mark I in 1913. The pistol had a very interesting feature in that its magazine can be seated at two different positions, one allowing the pistol to be fed individual cartridges and used as a single-shot, while the magazine could also be pressed all the way into the magazine well to allow for self-loading fire. While this doesn’t make much sense to modern sensibilities, keeping troops from wasting ammunition was something of a bugaboo for military commanders of the era, as could be seen in the various magazine cut-off designs on military rifles of the late 19th and early 20th centuries. The outbreak of WWI would severely hamper production efforts at Webley, such that only 7,611 Mark I N pistols would be produced and delivered to the Navy by 1917, and only a couple hundred would be delivered to the Army. This is one of the earlier Navy models, produced in 1913 and still retaining matching serialized parts. The pistol shows wear consistent with issue, carry and maintenance but still retains a nice bore and strong mechanics. This is a stout pistol with a robust design and is a fairly scarce model, perfect for a Webley or Great War sidearms collection. Please see our photos and good luck!