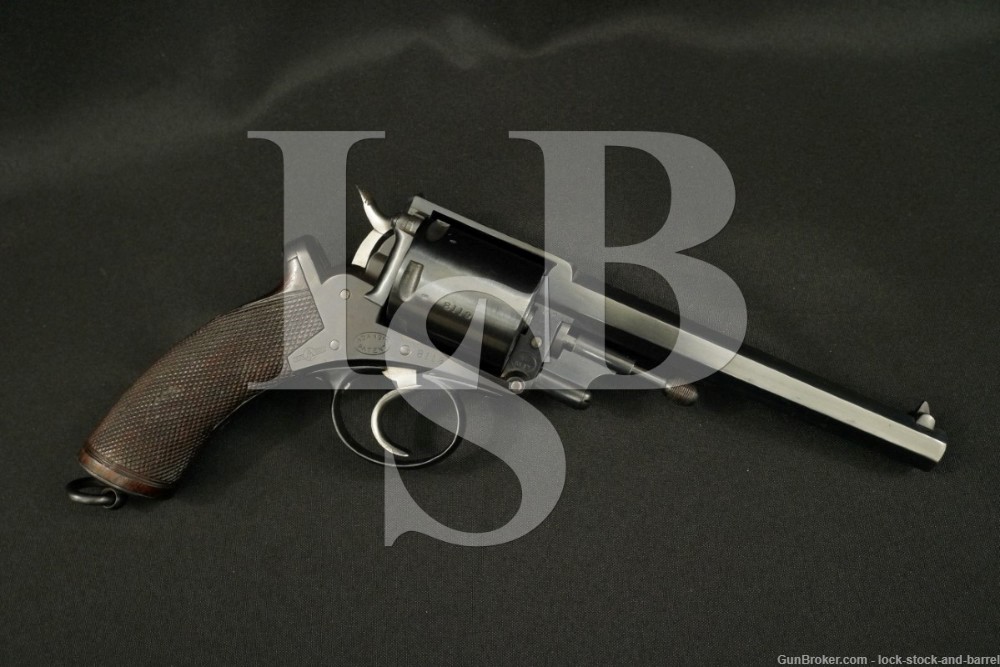 Year of Manufacture: 1869 (Given the “69” marking, the lower number of this type of revolver made, and the serial numbers of previous examples, we believe 1869 is the year of manufacture.)

Sights/Optics: The front sight is a blade dovetailed to the front of the barrel. The rear sight is a “V” notch at the rear of the topstrap.

Stock Configuration and Condition: The grip is one-piece checkered walnut with a dinstinctive knuckle at the top-rear and a lanyard ring on the buttcap. The checkering has smoothed somewhat but is still well-defined and there are only a few scattered light marks and a few light sompressions. There are no chips or cracks. Overall, the grips rate in Excellent condition, as Antique.

Bore Condition: The bore is rather dark with poorly defined rifling. There is moderate erosion throughout along with light stubborn fouling.

Overall Condition: This handgun retains about 90% of its current metal finish. There is minor thinning on a few edges. There are intermittent minor nicks along the edges of the barrel flats and there is scattered light surface oxidation under the finish. The frame has light scattered nicks and a few scuffs. The grip frame and tangs have scattered minor surface oxidation. The screws are sharp with usable slots. Overall, his handgun rates in Fine condition, as refinished antique.

Mechanics: The action functions correctly. The cylinder lockup is solid with only minor play when the trigger is depressed. The double action triger is smooth. The single action trigger pull is light. We did not fire this revolver. As with all used firearms, thorough cleaning may be necessary to meet your maintenance standards.

Our Assessment: The first centerfire cartridge service revolver officially adopted by the British War Department was the Adams Mark I, a conversion of the percussion Adams-Beaumont revolver devised by John Adams, brother of Robert Adams who had helped design the original revolver. The Mark I was chambered in .450 Adams, a black powder cartridge not dissimilar to the later .455 Webley. The later Mark II was a purpose-built cartridge revolver which borrowed heavily from the percussion design and finally the Mark III was devloped which incorporated a new ejector rod housed in the cylinder pin which could be swiveled out to punch out spent casings. This is one such Mark III revolver that saw service with Canadian Military Police which has been chambered for .442 Caliber (54-Bore) and, though it has been refinished, the numbered parts match and the mechanics are great. There is some heavy erosion in the bore, but that is really the only knock against this revolver. This is a must-have for a British Empire militaria collectors and if a qualified gunsmith deems it safe to fire it would probably make a fun shooter as well. Good luck and happy bidding.