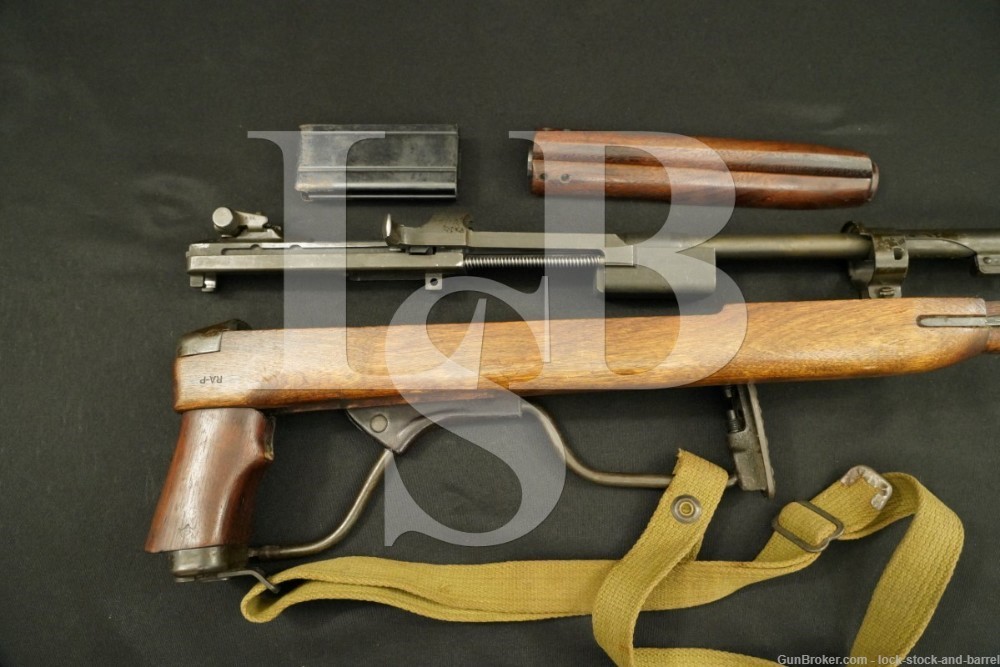 Model: M1 Carbine. This rifle is missing its trigger group.
A folding M1A1 Paratrooper Stock is included in the auction.
It is NOT LEGAL in California to set an M1 Carbine action in a Paratrooper stock.

Year of Manufacture: ATF Modern https://www.atf.gov/firearms/qa/what-firearms-are-considered-be-curio-and-relic-firearms
“ATF has recognized only complete, assembled firearms as curios or relics…Frames or receivers of curios or relics are not generally recognized as curios or relics.”
March, 1945 (page 28 of Scott Duff’s book The M1 Carbine Owner’s Guide).
Barrel Date: December, 1944

Stock Configuration & Condition: The M1A1 Paratrooper stock shows scrapes, scratches, and compression marks. Some have damaged small areas of the surface wood. The leather on the buttsock shows compression marks and discoloration. The buttstock metal has been coated in lacquer. Much of the lacquer finish has been lost. The buttstock shows small scrapes and areas of discoloration. The butstock folds and extends properly. The stock rates in about Very Good Plus overall condition.

Finish Originality: Refinished. The exposed metal has been coated in lacquer.

Overall Condition: This rifle retains about 95% of its metal finish. The exposed metal (the metal that normally sits outside of the stock) has been coated with lacquer. Most of the lacquer finish has been lost to scrapes & scratches. The metal shows light scrapes and discoloration. The right side of the receiver shows thinning consistent with cycling. The markings are deep. Overall, this incomplete rifle rates in about Very Good Plus condition as refinished.

Mechanics: The trigger group is missing.
There are not enough included parts to properly test the action. There is nothing to indicate that the action will not function correctly with properly installed parts. Parts missing may include but are not limited to the trigger assembly, the bolt assembly, and the stock. Please see photos to see what is included with this barreled receiver. We did not fire this rifle. As with all used firearms, a thorough cleaning may be necessary to meet your maintenance requirements.

Our Assessment: The M1 Carbine was developed and produced after WWII started. Over 6 million were made by a number of U.S. companies to assist with the all out war effort. The M1 Carbine was widely issued to U.S. Military Forces which numbered over 16 million during WWII. The M1 Carbine contributed greatly to U.S. efforts during WWII.
The Inland Manufacturing Division of General Motors was organized in 1922 for the manufacturing of steering wheels. During WWII Inland Division was one of many facilities that tooled up to manufacture M1 Carbines for the war effort. Inland produced the majority of WWII M1 Carbines, about 43%, and contributed greatly to the war effort. Inland M1 Carbines were used by millions of soldiers during WWII in numerous battles. If you see WWII footage that includes an M1 Carbine, it is most likely an Inland M1 Carbine.
This Inland M1 Carbine was made back in 1944. It is in good shape with a strong bore. It is missing its trigger group so it is no longer in its original configuration. A replacement trigger group can be found on-line or at a gun show.
This M1 Carbine comes with a folding M1A1 Paratrooper stock and a magazine. It will add to your WWII collection. If you live in a Free State outside of California you can assemble the rifle and take it to the range…after you add a trigger group. Good luck.