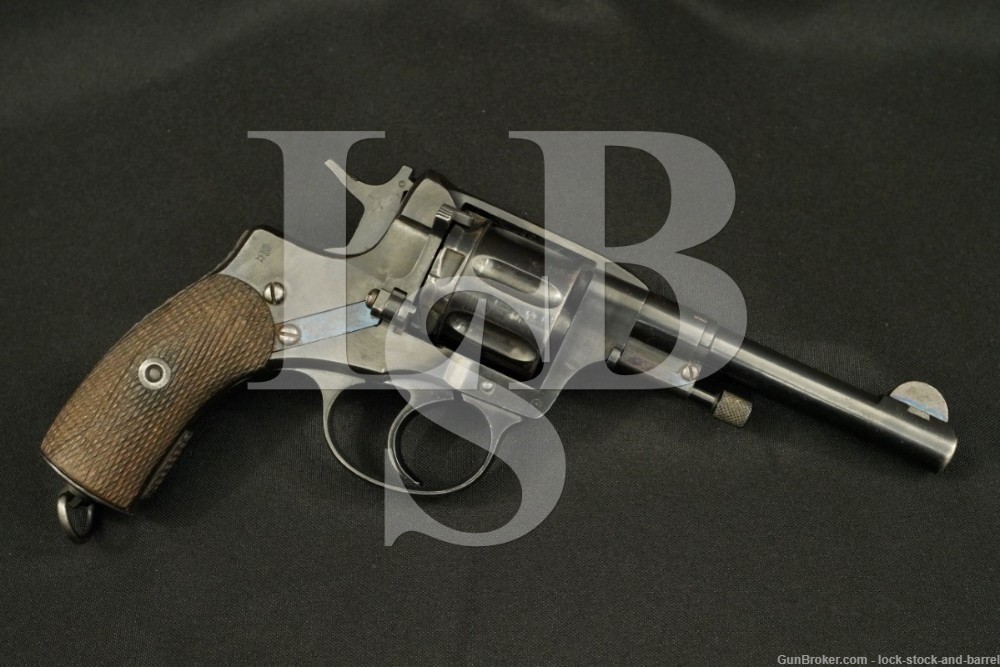 Sights/ Optics: The front sight is a blade dovetailed to the muzzle end of the barrel. The rear sight is a square-notch integral to the rear end of the top-strap.

Stock Configuration & Condition/ Grip: The grip panels are three piece brown checkered wood. There is a lanyard ring integral to the butt-strap. The grip panels have some light scuffs, nicks and handling marks. There are no chips or cracks. The checkering is sharp. Overall, the grip panels are in Very Good condition.

Bore Condition: The bore is semi-bright with sharp rolfing. There is scattered pitting concentrated at the center of the bore.

Overall Condition: The revolver retains about 85% of its metal finish. There are some light-moderate handling marks, nicks and scuffs. Notably, there is finish loss at the muzzle, the leading edges have finish loss, the cylinder has developed a turnline and there is some light surface oxidation visible on the front of the cylinder pin. The markings remain clear. The screwheads have toolmarks but they remain serviceable. Overall, the revolver is in Very Good condition.

Mechanics: The action functions correctly. The single action trigger is crisp and the double action is smooth. The cylinder locks with only barely perceptible play on each chamber. We did not fire this pistol. As with all previously owned firearms, a thorough cleaning may be necessary to meet your maintenance standards.

Our Assessment: This is a Tula Arsenal manufactured Nagant M1895 “OFITsYeRSKIY” Officer’s’s model) double-action revolver chambered for 7.62x38R cartridges which was manufactured in 1913. During the late Tsarist-era when the Belgian designed Nagant revolver was introduced for active service in the Russian military two variants were manufactured. The “OFITsYeRSKIY” (this gun) was a double action revolver while the “SOLDATSKIY” (soldier’s model) was a single-action variant which was discontinued in 1918. This particular specimen is a beautifully preserved Imperial era M1895 revolver and lacks the annoying importation marks that have defaced so many other M1895s on the market. This handgun can be used for plinking and double’s as a rather uncommon artifact that you do not want to miss out on!