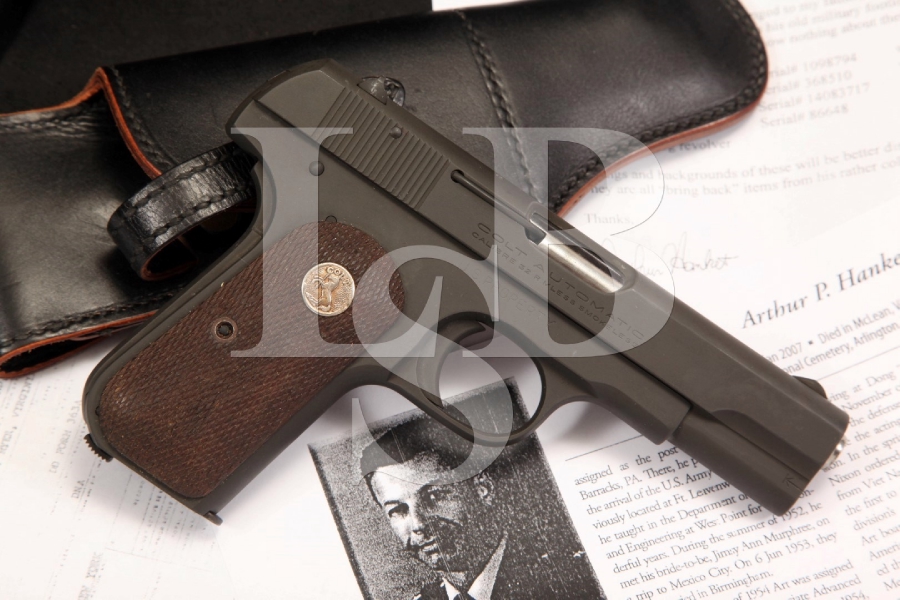 SOLD FOR:$5,964
Make: Colt Model: Model 1903 Pocket Hammerless General Officer’s Pistol Serial Number: 568510 Year of Manufacture: 1943 – Issued to BG Arthur Pancratius Hanket on 6/21/71 (“The Colt Pocket Hammerless Automatic Pistols” by J. Brunner, pg. 144) Caliber: .32 ACP (.32 Auto) Action Type: Single Action, Semi-Automatic with Removable Magazine Markings: The left side of the slide is marked “Colt’s PT. F.A. Mfg. Co. Hartford, CT. U.S.A. / Patented Apr.20.1897. DEC.22.1903” and at the rear with a Rampant Colt logo. The left side of the frame is marked “568510”. The right side of the slide is marked “COLT Automatic / Calibre 32 Rimless Smokeless”. The right side of the slide is marked “U.S. Property”. The left front of the trigger guard is marked with a “VP” in a triangle and at the rear with “8”. The right front of the trigger guard is marked “57”, and there is a rearward pointing arrow on the right front of the slide. There is a faint ordnance “wheel” marked on the left side of the slide behind the safety. Barrel Length: 3 ¾” Sights / Optics: The front sight is a short rounded bladed fixed to the top of the slide. The rear sight is a square notch dovetailed into the rear of the slide. Stock Configuration & Condition: The grips are checkered walnut with silver colored Rampant Colt medallions on each grip. The grips show oil staining and the checkering shows moderate wear with heavier wear at the front corner of the left grip and the along the bottom of the right grip. The grips are in about Very Good overall Condition. Type of Finish: The pistol has a military Parkerized finish. Finish Originality: By the time this pistol was manufactured, many were being made by Colt with Parkerized finishes. However, several hundred in the date range encompassing this pistol were shipped with a blued finish, and this could have been one of them, to which a Parkerized finish was added by the military before it was issued years later. Bore Condition: The bore is bright and the rifling is sharp. There is no erosion in the bore. Overall Condition: This handgun retains about 98% of its current finish. There are a very few light handling marks on the top of the slide and at the back of the slide and frame. There are also wear marks in the finish on the sides of the trigger. The slide and magazine release serrations are sharp, as is the safety checkering. The grip screw is sharp. The markings on the left side of the slide are shallow. Overall, this handgun rates in about Excellent condition. Mechanics: The action functions correctly and the slide is tight to the frame. It has a grip safety, a manual safety and a magazine disconnect that was added on the Type IV. We did not fire this handgun. Box, Paperwork & Accessories: One 8-round Parkerized magazine is included. It shows minimal wear. The floorplate is marked “CAL. 32 / COLT”. The magazine is in about Excellent condition. Also included is a black leather belt holster as issued to General Officers. It is identical to the one in the picture shown on pg. 93 of “The Colt Pocket Hammerless Automatic Pistols” by J. Brunner. The holster is made from a double thickness of leather so as to be fully lined. The inner layer is folded over at the top to form a belt loop which is secured by brass colored rivets. There is a restraining strap riveted to an inner surface of the holster which has a brass colored snap for securing it to the front of the holster. The stitching is all intact, and the leather is supple and only shows a few light handling marks. Overall, the holster is in Excellent condition. Also provided with this pistol is a copy of a letter signed by Arthur Hanket stating that this is one of the pistols owned by his father, Arthur P. Hanket, B. Gen. (ret.), along with a copy of his discharge papers and a copy of his biography. All are in Excellent condition. Our Assessment: From Wikipedia: “The Colt Model 1903 Pocket Hammerless is a semi-automatic pistol designed by John Browning, and was the first of the Colt concealed hammer models. Despite the title ‘Hammerless’, the Model 1903 does have a hammer, which is covered and hidden from view under the rear of the slide. This allowed the weapon to be carried in and withdrawn from a pocket quickly and smoothly without snagging. These pistols were popular civilian firearms for much of their life, and also served as United States General Officer pistols from the 1940s until their replacement by the M15 General Officers pistol in the 1970’s.” This is a Colt 1903 Type IV Pocket Hammerless General Officer’s pistol, complete with the correct black leather belt holster as issued to General Officers. This pistol was issued to BG Arthur P. Hanket on June 21, 1971, and there is documentation from his son included with the pistol stating that his father owned this pistol, plus copies of his father’s discharge papers and a detailed biography of his colorful career. The issuance of the pistol is also documented in “The Colt Pocket Hammerless Automatic Pistols”. The pistol shows some wear in the grips, but only a few marks in the finish. It is in about Excellent condition, as is its belt holster. Even the commercial versions of this pistol elicit collector interest and with this pistol we have documentation from the son of the Brig. General it was issued to, so the Colt collectors should be lining-up.