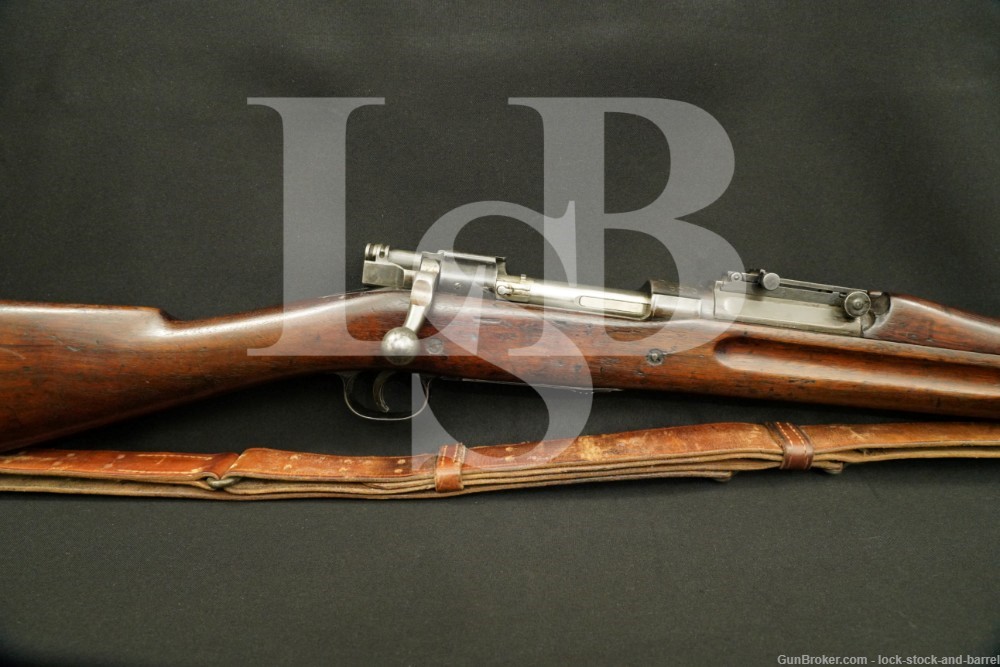 Model: Model 1922 MI. This rifle is no longer in its original configuration. It has been modified to mimic a Model 1903.

Sights / Optics: The sights have been replaced with Model 1903 sights. The front sight is a pinned blade atop a barrel mounted base. The rear sight is a “U” notched blade attached to a fully adjustable sight ladder marked from “3-27”. When flipped up separate notches and an aperture on the ladder can be used for sighting.
The top and right rear of the receiver are each drilled, tapped & filled with screws that can be used to secure and optic.

Stock Configuration & Condition: The stock has been replaced with a Model 1903 stock. The hardwood stock has a straight grip, nosecap with bayonet lug, stacking loop, barrel band, 2 sling loops, 2 through bolts, and a metal buttplate with hinged door for storage. We found cleaning gear in the butt. The wood shows several scrapes, scratches and compression marks. Many have damaged small portions of the surface wood. Most of the marks have been oiled. The LOP measures 13 inches from the front of the trigger to the back of the buttplate. The stock rates in about Very Good overall condition as refinished.

Bore Condition: The bore is semi bright. The rifling is crisp. The face of the muzzle and the interior edge of the muzzle show discoloration from oxidation and light intermittent erosion.

Overall Condition: The rifle retains about 87% of its metal finish. The metal has been treated with cold blue. Much of the cold blue finish has been lost. Front sight shows deep scratches on both sides. The metal shows scrapes, scratches, and thinning. The thinned portions of the metal show discoloration from oxidation. The screw heads show heavy use. The markings are deep. Overall, this rifle rates in about Very Good condition.

Box, Paperwork & Accessories: The rifle comes with an unmarked 5 round magazine and a leather sling. The magazine shows scrapes and thinning. It is in about Very Good condition. The sling shows scrapes, surface creasing, and discoloration on the leather as well as scrapes & light discoloration on the metal. Overall it is in about Very Good Plus condition. We found a metal oiler in the butt. One side contains the dripper and oil. The other side contains a pull through thong & brush. These itesm show oil residue and use. They are in Very Good condition.

Our Assessment: This Model 1922 MI was made back in 1926. It was originally made with a shorter & lighter stock and with a Lyman aperture sight. It has been modified to more closely resemble a full size Model 1903 Rifle. The stock and sights have been swapped out with 1903 sights and the action has been dropped into a Model 1903 stock.
The original Model 1922 line of rifles were designed to mimic the full size Springfield Model 1903’s, yet were chambered in .22 LR. The goal was to give soldiers trigger time on a Springfield 1903, without the expense of .30 Caliber ammo. Many M2s were used for civilian competition shooting. This rifle will add to your 1903 or Military collection.