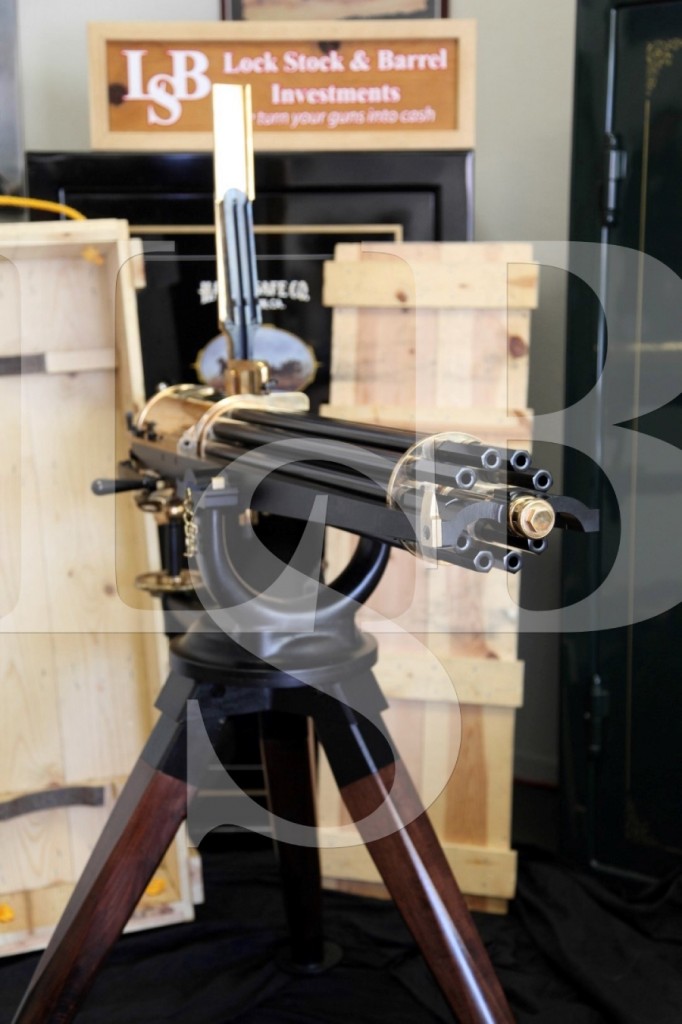 SOLD FOR:$28,000
Make: Anderson Guncraft, John Anderson Model: Model 1874 Battery Gun Serial Number: 055 Year of Manufacture: Ca. 2000 Caliber: .45-70 Action Type: Crank Handle Operated Multi Shot Rotating Barrel, Rifle Markings: The plaque on the frame is marked “GATLING’S BATTERY GUN / PAT. NOV. 4. 1862 / MAY 9. 1865 / FEB. 28. 1871 / APR. 9. 1872 / MADE BY COLT’S / PT. FIRE ARMS / MFG CO. / HARTFORD CONN. / U.S.A. / CAL. 45”. The brass frame rail is stamped “Model 1874”. Every chamber is marked with a number corresponding to each bolt. The frame latch is marked with an arrow. The top of the black frame rails is marked “No. 055”. Barrel Length: 32″ Sights / Optics: The front sight is a side mounted blade and the rear sight is a side mounted notch. Te rear sight is screw elevation adjustable and the front sight pivots up and down for use / storage. Mount Configuration & Condition: The mount is a walnut tripod, with black cast brass hardware. An oscillating mechanism is present on this gun as is a screw traverse system on the tripod. Elevation is adjusted by means of a large wheel located at the rear of the yoke. The yoke has a black finish. The gun has only been on the mount for pictures and the tripod is otherwise new. The Anderson Guncraft business card is still present in the lock. The mount rates in about Excellent and Like New overall condition. Type of Finish: Brass Frame, Blued Steel Barrels. A circular cast plaque is attached to the top of the body. The rails for the gun are made of steel and have a crinkle type paint applied Finish Originality: Factory Original Bore Condition: The bores are unfired. Overall Condition: This rifle retains about 99% of its metal finish. The balance of the finish shows only fingerprints and discoloration to the impossible-to-keep-clean polished brass. The gun is generally covered with oil and grease, as it was shipped and we have not fully cleaned the surfaces, giving the gun a bit of an “oily” appearance in the photographs. Likewise, there is some dried oil and grease on the blued barrels, affecting the sheen a bit, but likely protecting the surfaces from any wear or erosion. This is truly a new in the box Anderson Guncraft Gatling gun. We literally helped our consignor unload it from the car in the shipping crate and opened it. The screw heads are as they came from Anderson, and are sharp. The markings are crisp. Overall, this rifle rates in about Excellent and Like New condition. Mechanics: The action functions correctly. We have not fired this rifle or even pulled the crank. Box, Paperwork & Accessories: This beautiful rifle comes with the tripod, T&E mounts, the original shipping crate and a 20 RND brass magazine. All accessories, and the gun are new for all practical purposes. Our Assessment: The Gatling gun is one of the best known early rapid-fire weapons and a forerunner of the modern machine gun. Invented by Richard Gatling, it is known for its use by the Union forces during the American Civil War in the 1860s, which was the first time it was employed in combat. Later it was used in the assault on San Juan Hill during the Spanish-American War. The Gatling gun’s operation centered on a cyclic multi-barrel design which facilitated cooling and synchronized the firing/reloading sequence. Each barrel fired a single shot when it reached a certain point in the cycle, after which it ejected the spent cartridge, loaded a new round, and in the process, cooled down somewhat. This configuration allowed higher rates of fire to be achieved without the barrel overheating. There is no more identifiable gun, and certainly no gun every man would desire more than a Gatling Gun. Likewise, no one makes reproductions as well as John Anderson does. Built from the original Colt blueprints and all parts interchange with the originals, the only thing different is the price… If there was ever an opportunity for an investment with a volatile stock market and an opportunity for owning the coolest gun ever designed – this is it. We even promise to help convince your wife that there is room for it and it’ll look great in the living room.