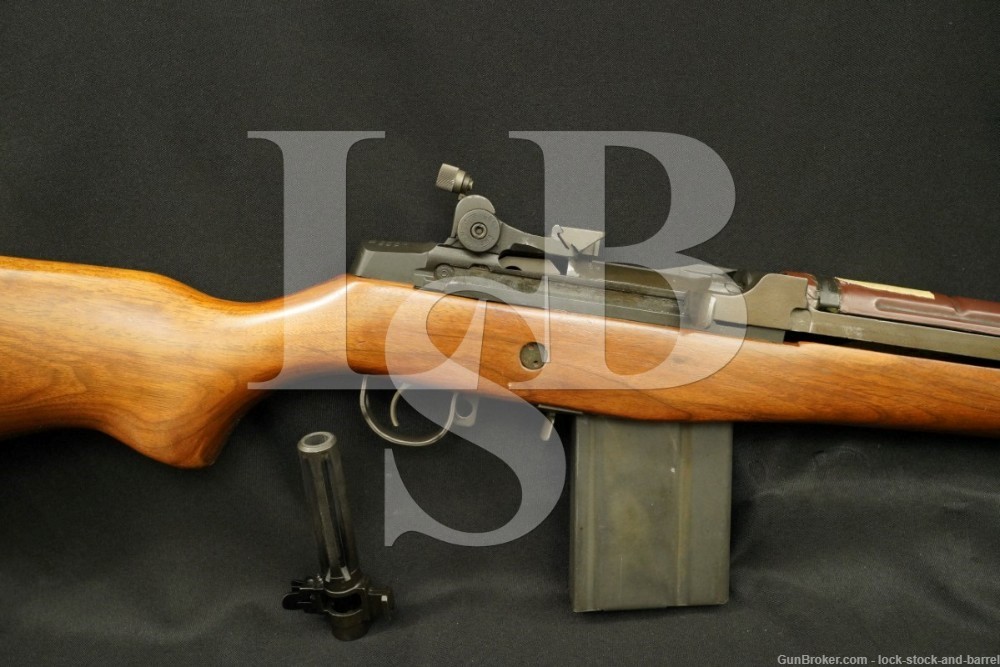 Stock Configuration & Condition: The walnut stock has a pistol grip, and uses a plastic upper handguard. There are sling swivels mounted at the butt and on the forend. The buttstock has a checkered metal butt plate that swivels up to reveal a second checkered buttplate underneath it. The second buttplate has a trapdoor covering two holes in the stock for storage of cleaning equipment. There are some infrequently dispersed little nicks and draglines throughout. There is a more notable small gash on the left side of the buttstock. Adhesive has been applied at the front and rear of the handguard and there is an old piece of tape applied to the top. There are no chips or cracks. The LOP measures 13” from the front of the trigger to the back of the buttplate. The plate shows light wear and some minor thinning along the edges. The stock rates in about Fine overall condition

Bore Condition: The bore is bright. The rifling is sharp & deep. There is some very faint erosion in the grooves.

Overall Condition: This rifle retains about 92% of its metal finish. There is some faint thinning on the leading edges of the receiver. There are scattered marks on the top of the bolt. The gas chamber assembly shows some thinning at the front. The op-rod shows a light patina appearance. There is thinning and light erosion throughout the flash hider. There is light operational wear. The metal has light handling marks and faint operational wear. The markings are deep. The screw heads are sharp. Overall, this rifle rates in about Fine condition.

Box, Paperwork & Accessories: One 20-round magazine and a flash hider are included. Please note, no magazine nor flash hider will be included where prohibited by law.

Our Assessment: This is a nice Springfield Armory M1A that looks like it saw much more time in the previous owner’s safe than at the range. The M1A has been a popular rifle with target and competition shooters for decades, tracing its roots back to the M14 rifle used by US troops from 1959 to this very day, though in more limited roles than in the ’50s. Per notes from the consignor, this is an M1A Super Match. We have no paperwork to substantiate this claim and upon calling Springfield headquarters, they had no information in their database for this rifle, likely given it’s early manufacture date. Nonetheless, this would be a great rifle for competition or recreational target shooting. This M1A is in Fine condition and should make its new owner smile every time they take it out to the range. Please see our photos and good luck!