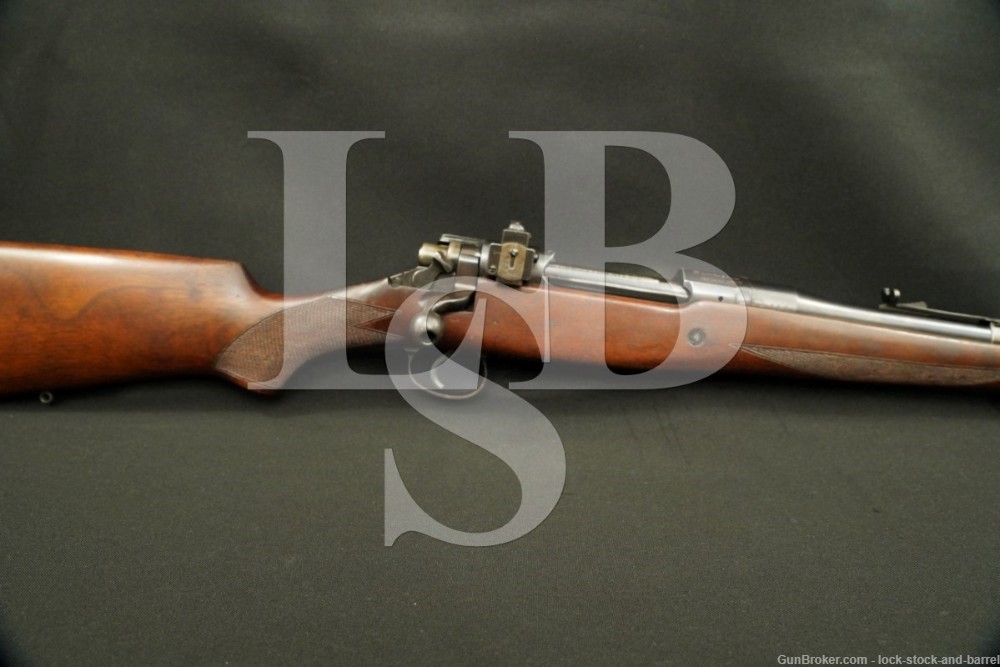 Sights / Optics: The front sight is a beaded blade that is pinned into a serrated barrel band base at the front of the barrel. The rear sight is a “U” notched elevator sight dovetailed into a barrel band base. The right side of the receiver is installed with a Lyman aperture peep sight. The Lyman sight does not have a screw-in aperture installed.

Stock Configuration & Condition: The stock is one-piece checkered walnut. The stock has a schnabel tip, pistol grip, straight comb, and serrated steel buttplate. There are sling studs at the front and rear. There are some scattered compressions and dings through the finish. Some of the most noticeable marks are on the left side at about the receiver. There are some scattered scuffs that have thinned the finish and some spots of discoloration. The checkering has some light wear but is mostly sharp. There are no chips or cracks. The LOP measures approximately 13 5/8” from the front of the trigger to the rear of the buttplate. The plate has some mottled patina, mottled thinning, little scabs, and little scratches. The stock rates in about Very Good-Fine overall condition.

Overall Condition: This rifle retains about 90% of its metal finish. The receiver has some finish loss on the edges and there are a few marks through the finish, most noticeable on the left side. The bottom metal has some areas of oxidation and there is some mottled thinning and discoloration on the trigger guard. The barrel has a few minor scuffs and a couple of little nicks through the finish. There are a few scattered spots of light surface oxidation. The most notable defect on the barrel is a patch of erosion and scabbing on the right side just behind the form sight. The barrel band bases of the sights have finish loss with discoloration from previous oxidation. The bolt handle has some light oxidation. There is standard operational wear. The screw heads are lightly worn with strong serviceable slots. The markings are clear and easily read. Overall, this rifle rates in about Very Good condition.

Our Assessment: Long before the ever-popular Model 700, there was the Model 30. The Model 30 is a factory sporter from Remington which took form after WWI when they had a surplus of 1917 parts. They took the rear sight wings off, redesigned & strengthened the floorplate, and slightly changed the receiver bridge. This resulted in a much more visually appealing rifle at the cost of only one round of capacity. These rifles had a strong action, nice lines, and outstanding build quality…what more could you ask for? What made things even better for Remington was that many of the returning veterans were already familiar with the 1917 type action they had used in the Great War, and that before WWI lever action and pump action rifles were the choice of sportsman, not bolt actions. WWI changed all this and the market for bolt action rifles expanded immensely after seeing just how reliable they were in combat. This created a huge opportunity for Remington who released the Model 30 in 1921. The model was really the only option until Winchester saw the success and wanted in on the action eventually releasing their Model 54 in 1925. These rifles were successful and were produced in many calibers and with different grades. This is a 30 Express chambered in .30-06 Springfield and has a 22″ barrel. These were Remington’s first high-powered bolt action sporting rifle and are the grandfather of their world-famous bolt actions today. While to the untrained eye this may look like “just another sporter”, this is a fine factory offering from Remington that the experienced collectors will take interest in. Please see our photos and good luck!