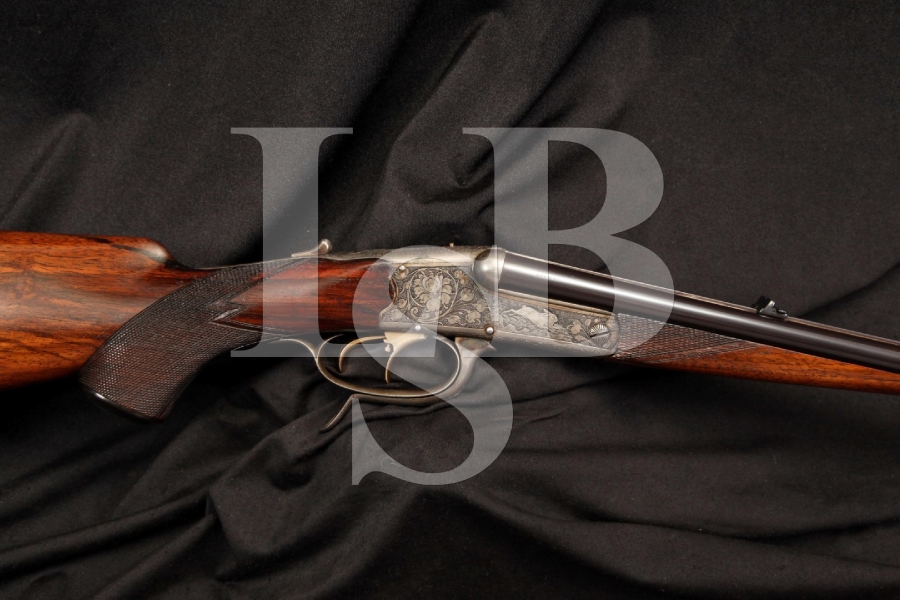 SOLD FOR:$3,580.00
Make: German Model: Combination gun /Cape Gun Serial Number: NSN Year of Manufacture: Circa 1950 to 1968 Because of the Crowned letter markings and No serial number or Import Marks. However the Rifled barrel is marked “527” which could indicate May of 1927. Because of the contrasting information, we are unable to label this Rifle C&R. Gauge: The rifled barrel’s markings call for .22 Caliber cartridge with 33 Grain Bullet Such as Remington CBee .22s. We do not recommend shooting high velocity .22 ammunition out of this rifle as modern LR ammo could have too high of pressure for regular use and rifling twist may be too slow to stabilize a 40gr bullet. The smooth bore has a .410 Chamber for 2 ½” shells Action Type: Dual Trigger Top Break with Adjustable Rifle Trigger and two cocking indicators. The action cocks with the action of the Underlever. Markings: The underside of the .410 barrel is marked with a crowned “B, S, and U”, “44” in a circle / “67.9 / 5.08 / 19”. The underside of the .22 caliber barrel is marked with crowned “B, G and U” over “527 / F.W” The center rib is marked “3”. The belly of the stock at the receiver is marked “C”. The left side of the receiver is scroll engraved with a boar running in a forested scene. There is engraving on the underlever and underside of the receiver. The right side of the receiver shows a rabbit running past tree stumps along with some scroll engraving. The left barrel is marked “12g”. There are other markings but they are illegible. The right barrel is marked “0.15 GR N.G.P M/71 / 2, 14 GRBL” This translates to (.15 grams neues Gewehr Pulver M/71- This is the powder charge used by the proofhouse. NGP M/71= new rifle powder for the M1871 Mauser army rifle. 2,14 gr Bl. (2.14 gram Blei=33 grain lead bullet) sourced from other collectors. The inside of the trigger guard is marked “3 5”. The five is very faint. The rifle trigger is marked “3”. Barrel Length: 23 ½” Choke: Full : The bore at the muzzle measures .413” / 10.44 mm Sights / Optics: This cape gun is mounted with a dovetail set beaded blade The rear sight is an express sight which flips up and down depending on range. Stock Configuration & Condition: The stocks are finely hand checkered walnut with a different pattern on the front strap. The splinter forend shows only one or two faint compression marks near the forend screw and a small chip out of the checkering at the receiver on the right side. The buttstock has a cheek piece which has sharp and unmarred edges. The wood is a bit proud of the metal at the receiver There is a gold oval inlayed into the belly of the buttstock. There is also a sling swivel mount. One is found on the belly of the buttstock and the other is mid barrel. As mentioned in the markings section, there is a “C” on the belly of the stock just to the rear of the pistol grip cap. There is a compression mark on the left side of the stock near the buttplate. There are four linear compression marks on the right side of the stock at the comb. The butt plate screws are engraved. There are otherwise only very faint handling marks. The LOP measures 13 ½” from the front of the forward trigger to the back of the buttplate. The buttplate shows some hairline cracking on the left side. The stocks rate in about Fine overall condition. Type of Finish: Blue with Case Colored Receiver and Trigger Guard and Gold Triggers. Finish Originality: Refinished Bore Condition: The bores are mostly bright. The rifling is sharp. There is light frosting/erosion in the .22 bore and some tooling rings in the shotgun bore. Overall Condition: This cape gun retains about 90% of its Current metal finish. The balance of the finish shows Very light case coloring. The colors are vivid underneath the lever and in well protected areas. The gold plated triggers retain much of their finish. Solder can be seen on the right side of the barrel rib where it joins the barrels. The screw heads are sharp. The markings underneath the barrel are clear. The markings on the sides of the barrel are thin. The engraving is very sharp. Overall, this combination / Cape gun rates in about Fine condition. Mechanics: The action functions Correctly. This is an under lever top break with dual triggers and cocking indicators. We have not fired this combination gun. Box, Paperwork & Accessories: None Our Assessment: What a beautiful Cape gun! Combination guns have a long history in Europe, Africa, and Asia, dating back to the early days of cartridge firearms. These guns were designed as hunting arms. The advantage of having a single firearm that can fire both rifle and shotgun cartridges is that a single gun can be used to hunt a very wide variety of game, from deer to game birds, and the shooter can choose the barrel appropriate for the target in seconds. It has fantastic engraving on the receiver and the case coloring can still be seen on the lever and in well protected areas. The trigger for the .22 caliber barrel has an adjustment screw on it. The wood appears to have been refinished but it was very well done. The barrels have also been professionally re-blued. This is a great collector’s piece and something that not many people can say that they have in their collections.