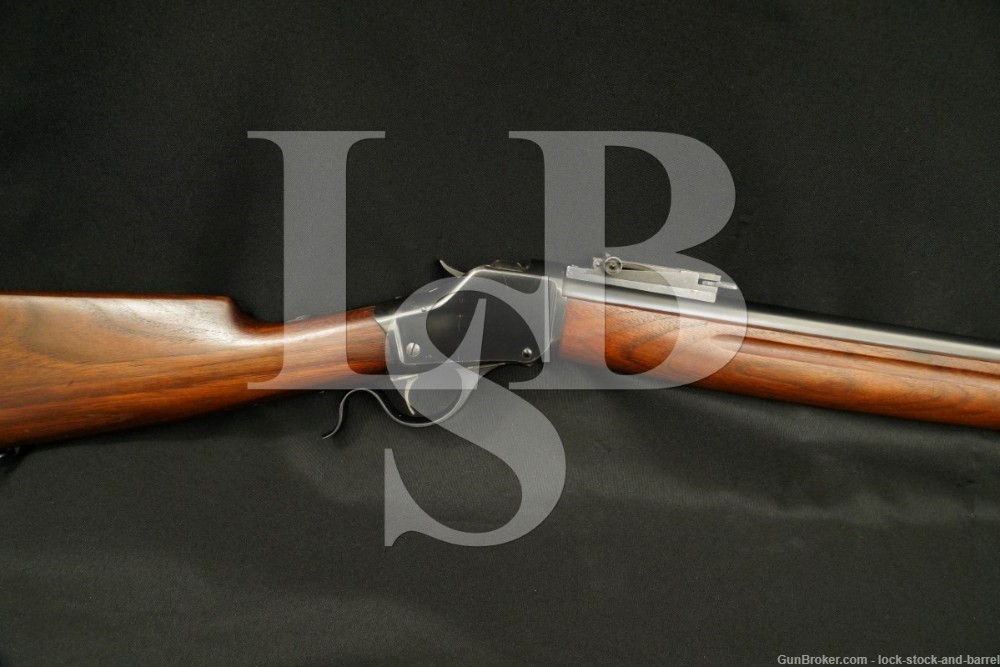 Sights / Optics: The front sight is a blade dovetailed and screw-set to a base fixed to the front of the barrel. The rear sight is a “military style” sight, adjustable for windage in its base which is screwed to the rear of the barrel. When folded down, a “U”-notch is presented. When folded up, there is a slider, “U”-notched on the top and with an aperture below, on a ladder marked from 1-20. When the slider is all the way down, it lines up approximately with the “5” marking, the 1-4 markings can only be used with the lower aperture. The “20” marking has its own “U”-notch integral to the top of the ladder. The top tang is drilled, tapped and filled for a tang sight (none present).

Stock Configuration & Condition: The stocks are two-piece smooth walnut. The long forend capped at the front having a single barrel band with sling swivel and finger grooves on each side behind the band. The buttstock has a straight grip, straight comb, carbine-style buttplate and a sling plate in the belly with swivel. The stocks have some scattered light nicks, scuffs and scratches. There are no cracks from damage, but there is a grain-line on the top-right edge of the forend at a knot about mid-way between the receiver and barrel band. There are no chips. The LOP measures 13 1/8″ from the front of the trigger to the back of the buttplate. The plate has wear, mostly at the heel and toe, with some surface erosion at the heel. Overall, the stocks are in Very Good-Fine condition.

Bore Condition: The re-lined bore is bright with sharp rifling. There is no erosion in the bore.

Overall Condition: This rifle retains about 92% of its metal finish. The finish is lightly thinning at some edges. The barrel retains strong finish with a few scattered minor marks and a couple of more notable tool marks on the left below the front sight base. Most of the balance is in the receiver and bottom tang which have some scattered surface oxidation, mostly in the tangs and the left flat. Each flat has a scratch toward the rear and there are a few other more minor marks. The action has light operational wear. The screw heads range from sharp to tool marked with strong slots. The markings are clear. Overall, this rifle is in Very Good-Fine condition.

Mechanics: The action works correctly. The hammer has a safety notch. The trigger breaks crisply and is fairly light. The lever locks up solidly. We have not fired this rifle. As with all used firearms, a thorough cleaning may be necessary to meet your maintenance standards.

Our Assessment: When they were first manufactured, the John Browning designed Winchester Model 1885 rifles were deemed stronger than the prior Sharps rifles, and the different sight and trigger options available made them an instant hit with hunters and target shooters alike. The Model 1885 rifles were targeted at competitors in “Match Shooting”, a sport which was extremely popular from about 1871 to 1917. The Winchester rifles challenged the Sharps, Remington, Maynard and Ballard rifles, and quickly became known for their reliability and accuracy. Major Ned Roberts, inventor of the .257 Roberts cartridge, described the Model 1885 as “the most reliable, strongest and altogether best single shot rifle ever produced”. This example is a 2nd Model High Wall Musket chambered for .22 Long Rifle, also known as the “Winder Musket”. This example is in Very Good-Fine condition, retaining much of its finish, some minor wear in the stock, a great bore and strong mechanics. This rifle will surely interest the Winchester collectors as well as those with an interest for rimfire target rifles. With proper maintenance and care, it could also be out plinking for another century. Please see our photos and good luck!