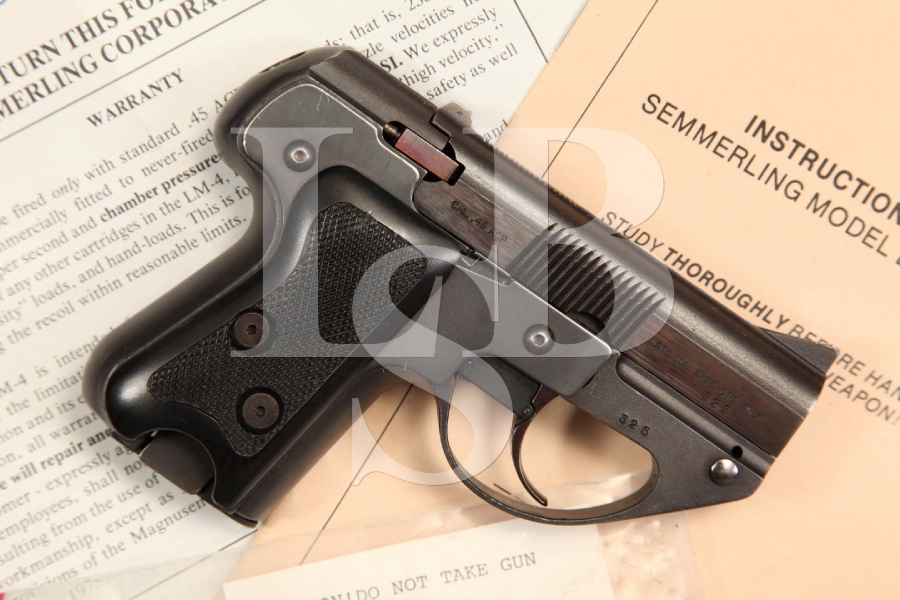 SOLD FOR: $6,326.72
Make: Semmerling Model: LM-4 Serial Number: 325 Year of Manufacture: 1980s Caliber: .45 ACP Action Type: Manually Operated Slide, Double Action Only Repeating Pistol Markings: The right side of the slide is marked “Cal .45 ACP”, and “Std. Mil. Spec. Ctg. Only / 325”. The right side of the frame is marked with the serial number “325”. The left side of the slide is marked “Mod. LM-4 / Patents Pending” and “Semmerling Corp. / Boston, Mass.” Barrel Length: 3 ¾” Sights / Optics: The front sight is a fixed serrated ramped blade. The rear sight is a square notch on the slide. Stock Configuration & Condition: The grips are checkered plastic panels. There is some light wear to the checkering. The grips show light handling marks. The grips rate in about Very Good to Fine overall condition. Type of Finish: Blue Finish Originality: All Original Bore Condition: The bore is bright and the rifling is sharp. There is no erosion in the bore. There is a tiny inward impression which was caused by driving the forward assembly pin, a slight manufacturing flaw, on the bottom of the bore. Overall Condition: This handgun retains about 95% of its metal finish. There are light marks on the finish from the action. There is faint wear on the hard edges. The right side plate shows faint handling marks. There is a casting flaw on the belly of the trigger guard. The screw heads are sharp. The markings are clear. Overall, this handgun rates in about Fine condition. Mechanics: The action functions correctly and smoothly. We did not fire this handgun. Box, Paperwork & Accessories: A Semmerling Corporation instruction manual and warranty sheet are included along with spare screws and an Allen wrench. The paperwork is in Fine condition. The hardware is in Excellent condition. Our Assessment: From Wikipedia:” The goal of the LM4 was to achieve a combination of the highest practical firepower in as small and light a gun as possible, so as to be easily concealable. This was approached by selecting the service caliber of .45 ACP for its proven stopping power and opting for a manual repeating mechanism to minimize bulk and weight and ensure flawless operation in the most difficult situations. Because of this the LM4 was first offered to the U.S. Army and government agencies. The Semmerling LM4 has 33 parts (including screws), making it one of the simplest guns ever made. In the original design, every part except for the springs was made of high-quality S-7 tool steel. Every pistol was Magnafluxed (a method of testing ferrous metals for surface and subsurface flaws) twice in their assembly, making the LM4 one of the most carefully constructed pistols produced. Each pistol was essentially handmade to order with production averaging a little over ten pieces a month, while maintaining very strict quality control procedures to ensure a high degree of reliability and functionality. Of the LM4 model, only about 600 were ever produced. Although the Semmerling was intended as a back-up pistol for those most at risk of having their primary weapon taken from them, some adopted the pistol as a “hide-out” weapon. Capable of a “shot-a-second” firing rate, a practiced shooter can achieve an outstanding shooting performance. With the magazine loaded and a round in the chamber, the Semmerling LM4 is capable of carrying five .45 ACP rounds.” That pretty much says it all. This is a rare and high quality handgun. Colonel Jeff Cooper was a big fan. Here is a link to our website with a very interesting compilation of information about the Semmerling: https://www.lsbauctions.com/2576/rare-semmerling-manually-operated-slide-lm-4-lichtman-model-4-45-acp-repeating-pistol-45acp-blued-information/.