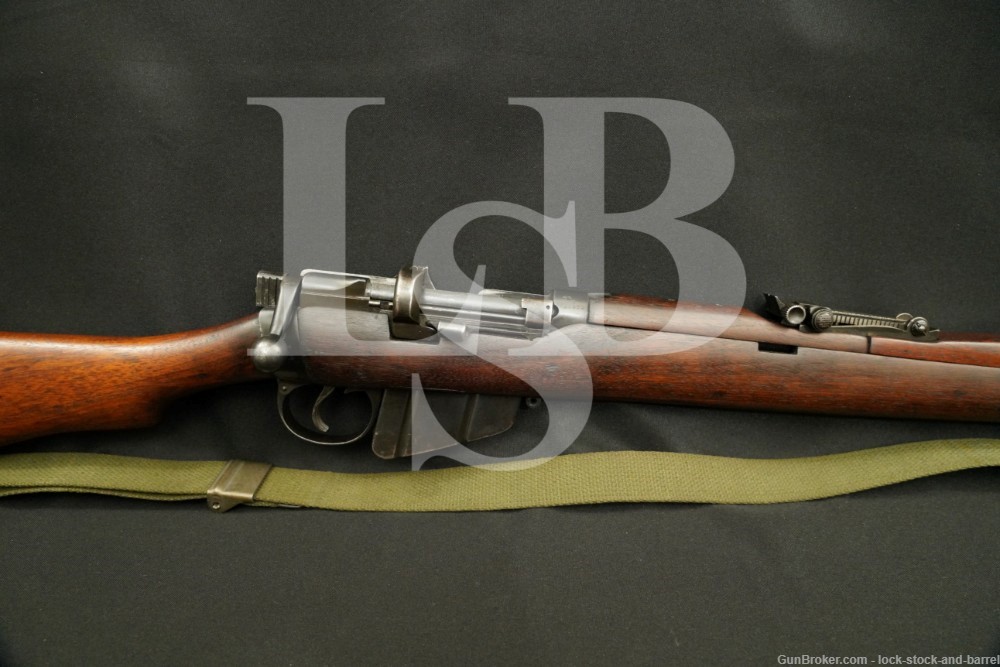 Model: SHTLE I*** (Short Magazine Lee-Enfield Mark I*** or SMLE MkI***). This rifle has been upgraded to resemble a No1 MkIII.

Sights / Optics: The front sight is a bladed post set atop a ramped base and between two protective ears. The rear sight is a sliding sight escalator marked from “2-20”.

Stock Configuration & Condition: The wood stock has a straight grip with finger groove, nosecap assembly with sight wings & bayonet lug, stacking loop, barrel band, 2 sling loops, marking disk on the right buttstock, and a brass buttplate with a hinged door for storage. The buttplate shows scratches, small dents & oxidation. The marking disk shows oxidation. The wood shows several scrapes, scratches, and compression marks. Some have damaged small portions of the surface wood. These marks have been oiled. The LOP measures 13 inches from the front of the trigger to the back of the buttplate. The stock rates in about Very Good Plus overall condition.

Bore Condition: The grooves are dark and the rifling is deep. There is erosion in the bore. It is heavier in the grooves.

Overall Condition: This rifle retains about 87% of its metal finish. The metal shows scrapes, small scratches, thinning on the leading edges of the metal, and areas of discoloration from oxidation. The edges of the stock collar show surface erosion. The screw heads show use. The markings are deep. Overall, this rifle rates in about Very Good Plus condition.

Our Assessment: The Enfield SHTLE I*** is also known as the SMLE MkI***. This Rare Short Magazine Lee Enfield Mark I*** was made back in 1905 by the British Small Arms Company (B.S.A. Co.) of England. The 3 asterisks (***) after the designation signify different upgrades done to the rifle during its service life. This is a rare rifle that was made under the reign of Edward VII who was King of the United Kingdom (as well as the British Dominions and India) from 22 January 1901 until his death in 1910. This SMLE MkI*** has been further upgraded to roughly No1 MkIII configuration. This is a Good looking rifle for your Enfield collection.
For more see pages 2 – 5 of Charles Stratton’s book, British Enfield Rifles Volume 1 / SMLE (No. 1) Rifles Mk1 and Mk III, 3rd Edition. Good luck.