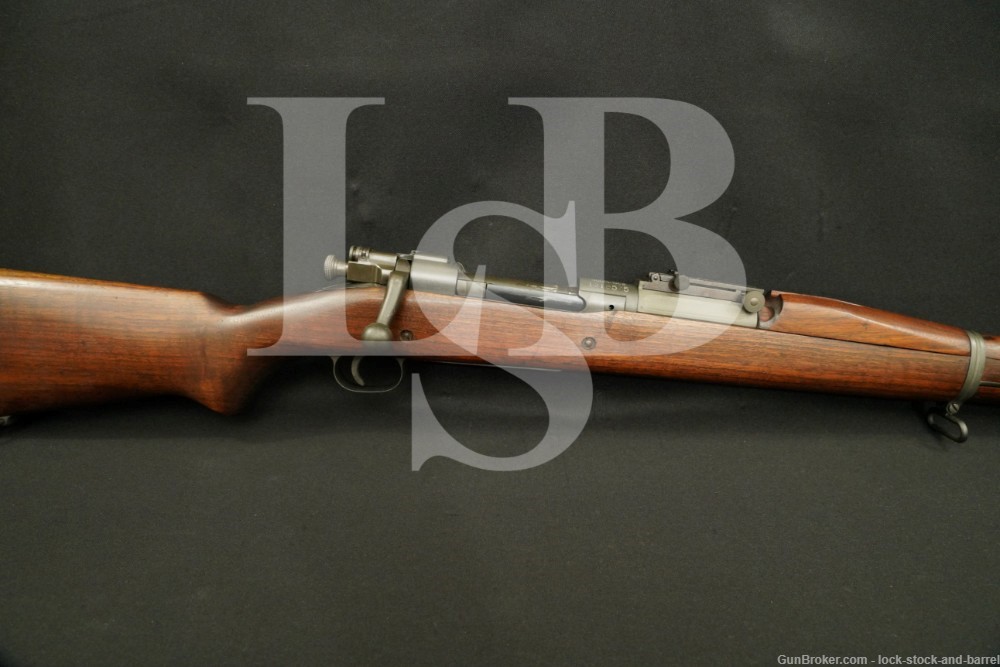 Stock Configuration & Condition: The two piece hardwood stock has a straight grip, metal nosecap with bayonet lug, stacking loop, barrel band, two sling loops, two through bolts, and a metal buttplate with hinged door for storage. The buttplate & stock hardware have been refinished. The buttplate shows scrapes and an area of thinning. The wood shows several scrapes, scratches, and compression marks. Most of the marks are small or light. The LOP measures 13 ? inches from the front of the trigger to the back of the buttplate. The stock rates in about Fine overall condition as refinished.

Bore Condition: The lands are bright, the grooves are semi bright and the rifling is deep. There is fouling and intermittent light erosion in the grooves near the muzzle. The fouling should clean up some. The bore shows an M.E. 0.0.

Overall Condition: This rifle retains about 97% of its metal finish as refinished. The front sight has scratches showing through the new finish. It also shows scrapes & thinning. The bottom metal has small scratches and small dents showing through the new finish. The screw heads show light use. The markings are deep. Overall, this rifle rates in about Fine condition as refinished.

Mechanics: The action functions correctly. We did not fire this rifle. As with all used firearms, a thorough cleaning may be necessary to meet your maintenance requirements.
The bayonet mounts the rifle properly.

Box, Paperwork & Accessories: The rifle comes with a Model 1905 Sword Bayonet. Bayonet has been chromed. It shows light scrapes on the metal and scratches on the wood. It is in Fine condition.

Our Assessment:  When the US Army was looking for a rifle design to replace the 1898 Krag rifle, they looked directly at the Spanish Model 1893 Mauser. This was due to the fact that the performance of the Model 1893 Mauser was far superior than that of the 1898 Krag during the Spanish-American War. The Model 1903 is basically a redesigned Mauser. A U.S. Patent Court eventually found that the U.S. Army had violated Mauser’s patents and required the U.S. Army to pay the German Mauser manufacturers patent royalties. Payments were stopped once WWI started. The 1903 has a strong reliable action that served the Army for over thirty years in two world wars.
This Springfield Armory 1903 was made back in 1932. It has since been rebuilt and refinished so it looks great for being 90 years old. The rifle has clear markings on the receiver & barrel that add to its history.  This Springfield Model 1903 comes with a chromed Model 1905 Sword Bayonet which is correct for the rifle. It will add nicely to your military collection.