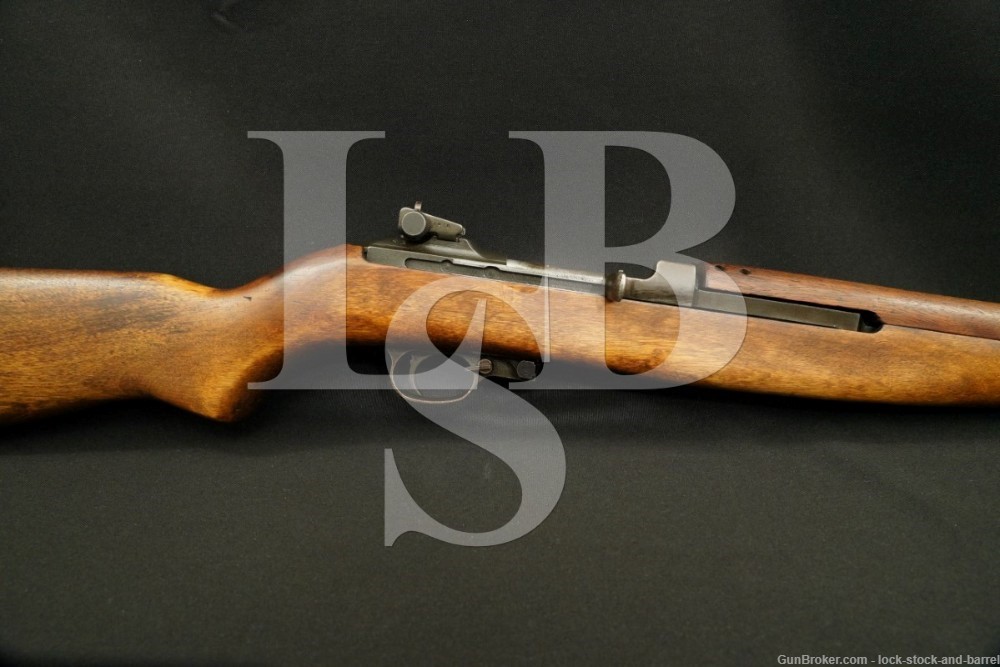 Stock Configuration & Condition: The stock has a pistol grip, Type III barrel band with sling loop & bayonet lug, sling well, sling pass through, and a metal buttplate. The buttplate shows scrapes. The oiler cut out in the butt has been slightly enlarged. The wood shows numerous scrapes & scratches which have been oiled. The LOP measures 13 ¼ inches from the front of the trigger to the back of the buttplate. The stock rates in about Very Good overall condition.

Bore Condition: The bore is semi bright. The grooves near the muzzle are light gray. The rifling is deep. There is fouling and erosion in the grooves. The fouling should clean up some. The bore shows an M.E. of 2.7.

Overall Condition: This rifle retains about 90% of its metal finish. The sides of the receiver show some thinning under the wood. The top of the barrel shows oxidation and thinning under the barrel band. The metal shows light scrapes, small scratches, and light discoloration. The right side of the receiver & bolt show thinning from cycling. Most of the markings are deep. The barrel markings are well defined. Overall, this rifle rates in about Very Good condition.

Box, Paperwork & Accessories: There is NO magazine.

Our Assessment: The M1 Carbine was developed and produced after WWII started. Over 6 million were made by a number of U.S. companies to assist with the all out war effort. The M1 Carbine was widely issued to U.S. Military Forces which numbered over 16 million during WWII. The M1 Carbine contributed greatly to U.S. efforts during WWII.
The Inland Manufacturing Division of General Motors was organized in 1922 for the manufacturing of steering wheels. During WWII Inland Division was one of many facilities that tooled up to manufacture M1 Carbines for the war effort. Inland produced the majority of WWII M1 Carbines, about 43%, and contributed greatly to the war effort. Inland M1 Carbines were used by millions of soldiers during WWII in numerous battles. If you see WWII footage that includes an M1 Carbine, it is most likely an Inland M1 Carbine.
This Inland M1 Carbine was made back in 1944. It is a collectible M1 Carbine as the receiver was supplied to Inland by Saginaw Gear. The receiver is marked “SG” under the wood and uses a wide locking tang. Saginaw Gear made receivers with wide locking tangs. This M1 Carbine has been rebuilt and now uses a mix of Inland and USGI parts. This Inland M1 Carbine will add to your collection and should be fun out at the range. Good luck.