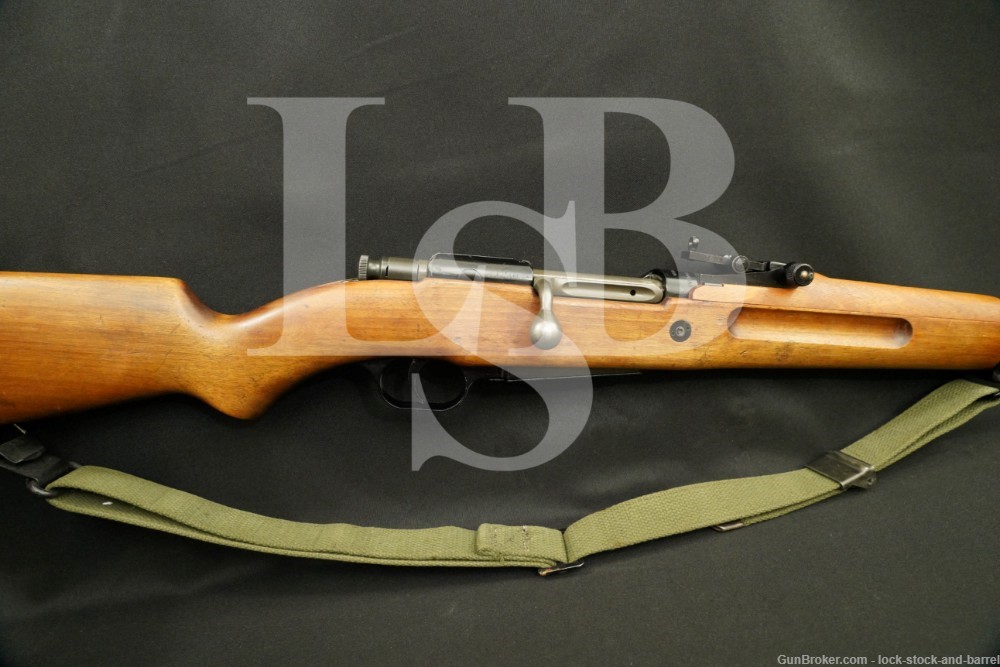 Make: Manufactured by Madsen of Denmark as a contract rifle for the Colombian Navy.

Sights / Optics: The front sight is a hooded post set atop a raised base. The rear sight is a fully adjustable aperture sight set atop a sliding escalator. It is marked from “1-9”.

Stock Configuration & Condition: The 2 piece hardwood stock has a pistol grip, finger grooves, nose cap with bayonet lug, barrel band, 2 sling loops, through bolt, and a ribbed hard rubber recoil pad. The recoil pad shows scuffs & scrapes. The nosecap shows scratches and thinning. The wood shows several scrapes, scratches, and compression marks. Some have damaged small portions of the surface wood. The LOP measures 13 ¼ inches from the front of the trigger to the back of the recoil pad. The stock rates in about Very Good Plus overall condition.

Overall Condition: This rifle retains about 95% of its metal finish. The metal shows scrapes & scratches. Several of these marks have removed small areas of the black paint finish. The exposed metal shows light discoloration from oxidation. The screw heads show use. The markings are sharp & deep. Overall, this rifle rates in about Very Good Plus to Fine condition.

Mechanics: The action functions correctly. We have not fired this rifle.  As with all used firearms, a thorough cleaning may be necessary to meet your maintenance requirements.
The top of the cocking indicator is marked “S” for safe. The safety on the left has to be pressed and flipped up to the “S” to engage it.

Box, Paperwork & Accessories: The rifle comes with a green canvas sling. It shows light soiling on the canvas. It shows scrapes, oxidation, and tape residue on the metal. It is in about Very Good Plus condition.

Our Assessment: This Madsen Model 1947 was built by the Danes as part of a 1958 Military contract for the Colombian Navy. This rifle is sometimes known as the Colombian Model 1958. The rifle was designed by Madsen in 1947 but the Colombians purchased these rifles in 1958. These rifles are considered to be the “last bolt action Military rifle”, as they were based on new engineering from scratch. Strangely, the Danes did not adopt this rifle as their own. Instead, they sold it to developing nations with limited budgets. The muzzle brake, upgraded sights and recoil pad are original. These rifles are rare. The rifle has deep & clear markings on the receiver as well as a bore that is strong & bright.This M47 would make a great addition to any Military collection. For more see page 284 of Joe Puleo’s book, Bolt Action Military Rifles of the World.