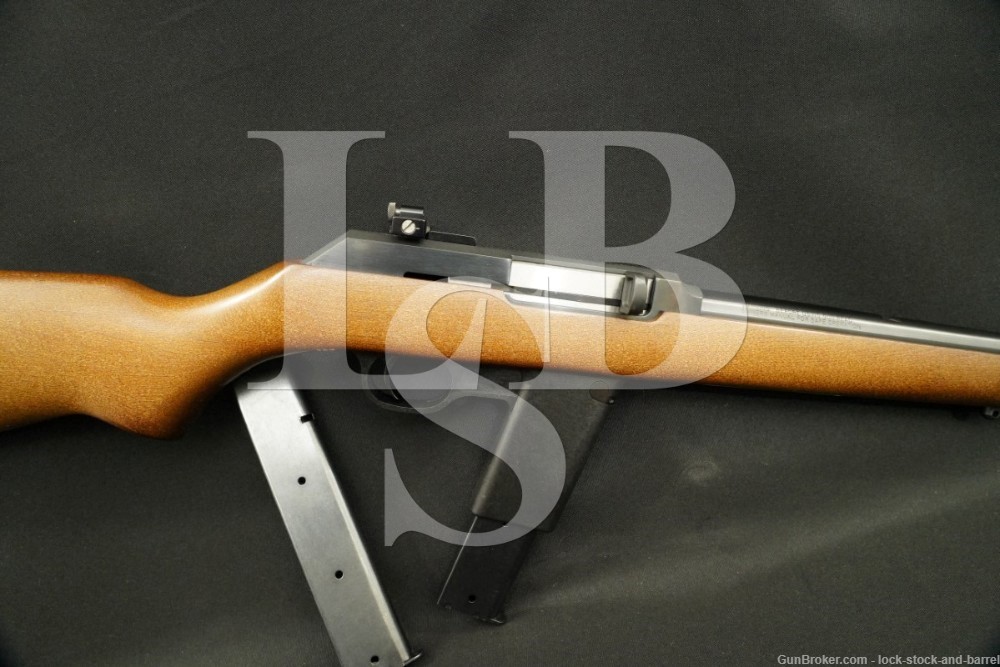 Sights / Optics: The front sight is a tall brass beaded blade dovetailed to a serrated ramped riser that is screwed to the barrel. The base is slotted for a hood that is not present. The rear sight has been removed leaving an empty dovetail at the rear of the barrel. There are two drilled, tapped, and filled holes toward the front of the receiver. The rear of the receiver is equipped with a fully adjustable Williams peep sight.

Stock Configuration & Condition: The one piece stock is press smooth stained hardwood with a pistol grip, straight comb, sling stud front and rear, and a red rubber Marlin butt pad. The bottom of the forearm has an original Marlin factory test sticker. The wood shows some sparsely scattered light draglines and faint nicks. There is a slightly more notable scuff on the front left side of the forearm towards the bottom, as well as on to the right of the lower metal at the rear. There are no chips or cracks. The LOP measures 14” from the front of the trigger to the rear of the butt pad. The stocks rate in about Fine-Plus overall condition.

Bore Condition: The bore is mostly bright and the rifling is sharp. There is what appears to be some extremely faint erosion on the lands that may prove to be stubborn fouling with a proper cleaning.

Overall Condition: This carbine retains about 98% of its metal finish. There is one tiny little spot of oxidation on the right side of the barrel toward the front half of the barrel. There is some faint thinning on the leading edges of the receiver and a light scuff on the top. The screw heads are sharp. The markings are clear. Overall, this gun rates in about Fair condition. (See mechanics)

Mechanics: The action functions correctly. However, the bolt does not fully open to allow shells to cycle properly. We suspect that the bushing in the rear of the receiver has disintegrated and is blocking the hammer. The hammer does still cock the trigger given its limited range of motion. There is a magazine disconnect safety. The safety is mounted in the forward portion of the trigger guard, similar to the M1 Garand. There is a bolt hold back (and release) on the side of the magazine well, just behind the magazine release button. The Marlin magazine is a copy of the Colt 1911 magazine and this gun should function properly with most 1911 magazines. We did not fire this carbine. As with all previously owned firearms, a thorough cleaning may be necessary to meet your maintenance standards.

Our Assessment: These are nifty little carbines and a good companion for anyone who already owns a single stack 1911 since they can take the same ammo and magazines. They take the same scope mounts as the Marlin 336 lever action 30-30, so mounts are easily available. The Camp Carbine lends itself particularly well to red dot sights if iron sights seem to be getting smaller and fuzzier. The same receiver top spacing allows for mounting of the Williams peep sight that is currently installed. Replacement springs are available from Wolff and the only other part likely to wear out is a buffer for the bolt, as it is on this gun and they too, are now available. The Camp Carbine was discontinued by Marlin in 1999 and a small cult has grown up around them. They can work well for home defense, especially for people who find the 1911 difficult to manipulate and shoot or desire a long gun but are worried about over-penetration. This example will need a little work to get it back into properly functioning condition but it will be well worth it! Please see our photos and good luck!