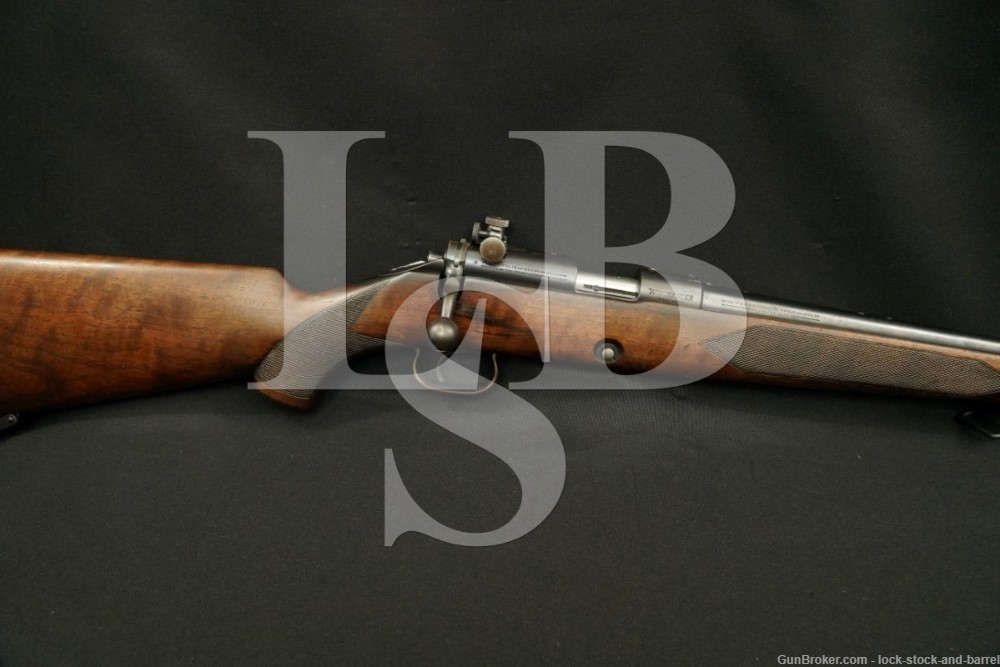 Year of Manufacture: The rifle was made in November of 1934.

Barrel Length: The round barrel is 24” in length, measuring 0.272” in diameter at the muzzle.

Stock Configuration & Condition: The stock is a one-piece walnut with a capped pistol grip, a straight comb with cheek rest on the left side, and a flat shotgun style checkered steel buttplate. It features the hand-cut checkering on both sides of the forestock, as well as the three hand-checkered “diamonds” on the forestock’s bottom. Hand-cut checkering on both sides of the pistol grip is as elegant as it is functional. The stock has been relieved for the installed receiver sight. The pistol grip has a hard rubber Winchester cap, and the forend has an ebony nose cap. Sling plates are inlaid and screwed to the belly and the forend with Winchester Super-Grade sling swivels installed. The stock has some scattered light nicks, scuffs and scratches. There is some discoloration at the right-rear edge where the wood meets the buttplate. There is some wood-fill around the heel of the receiver. Checkering is generally well defined throughout. On the left side, approximately ¾” below the receiver, a thin 3” crack extends forward from the rear sight under the receiver to the chamber ring. On the right side, approximately 1” below the receiver, a 2 ¼” crack of the same width extends forward from the bolt inlet. It appears there was an attempt to repair these cracks, with adhesive visible in the crack. The LOP measures 13 5/8” from the front of the trigger to the back of the buttplate. The buttplate has gone to a light-moderate patina with some surface oxidation in the well defined checkering. Overall, the stock is in Good condition as refinished and would rate higher but for the cracks.

Overall Condition: This rifle retains about 85% of its metal finish. Most of the balance is in the bottom metal, which has mostly gone to a light-moderate patina with some minor surface erosion. The barrel and receiver have a generally strong finish, with some scattered minor surface oxidation, nicks, scuffs and scratches. The barrel has a spot of more notable oxidation on the left at the nose cap. The receiver has wear on the top consistent with previously installed scope mounts. The cut on the bridge for the receiver sight is in the white, indicating that the cut has been modified from its original factory profile. Finish on the bolt is consistent with the rest of the rifle’s bluing, save for a small patch of surface erosion on the bolt knob. The action shows light operational wear. Screw heads range from sharp to tool-marked with strong slots. The markings are crisp. Overall, this rifle rates in about Very Good condition.

Box, Paperwork & Accessories: This rifle comes with a 5-round blued steel magazine and Super-Grade swivels front and rear, measuring 1 ¼” wide. The magazine is marked on its floorplate with “MADE IN U.S.A. / WINCHESTER / TRADE MARK.” It shows light wear with intact feed lips and a strong spring. Patina of swivels is consistent with the rest of the rifle.

Our Assessment: From its inception, Winchester had something special in mind for their Model 52. This rifle was never intended to be a typical .22 long rifle plinker, but rather a world class firearm that just happened to be chambered in a rimfire caliber. Fit and finish was comparable to a fine European sporting rifle, and a simple walk through the woods in search of small game with the Model 52 in hand could evoke the same emotions one might experience when hunting Africa’s fabled “Big 5,” only without fear of being stampeded or mauled! A great shooter then and now, accuracy rivaled its competitors; rest assured, the Model 52 would more than hold up its end of the bargain in any target shooting competition. The Model 52 underwent several changes throughout its 60-year production run, with mechanical and design alterations designated by different suffixes. Field & Stream, among the most respected hunting and fishing magazines ever published, called the Winchester Model 52 “one of the 50 best guns ever made.”

This particular Model 52, a Pre-A “Speed Lock,” so called because of its reduced trigger travel and faster lock time, resulting in greater accuracy, is in Very Good overall condition for an 88-year-old rifle – with the exception of the two aforementioned cracks in the stock. But don’t let those visual deficiencies deter you from adding this rifle to your collection. This firearm was well-used, but also well cared for. It was unquestionably a previous owner’s favorite, to take to the range or into the field and be enjoyed, as intended, not simply relegated to wall-hanger or safe-queen status, as far too many Model 52’s often are. Bidding on this great example of Winchester workmanship is the first step in continuing its legacy.