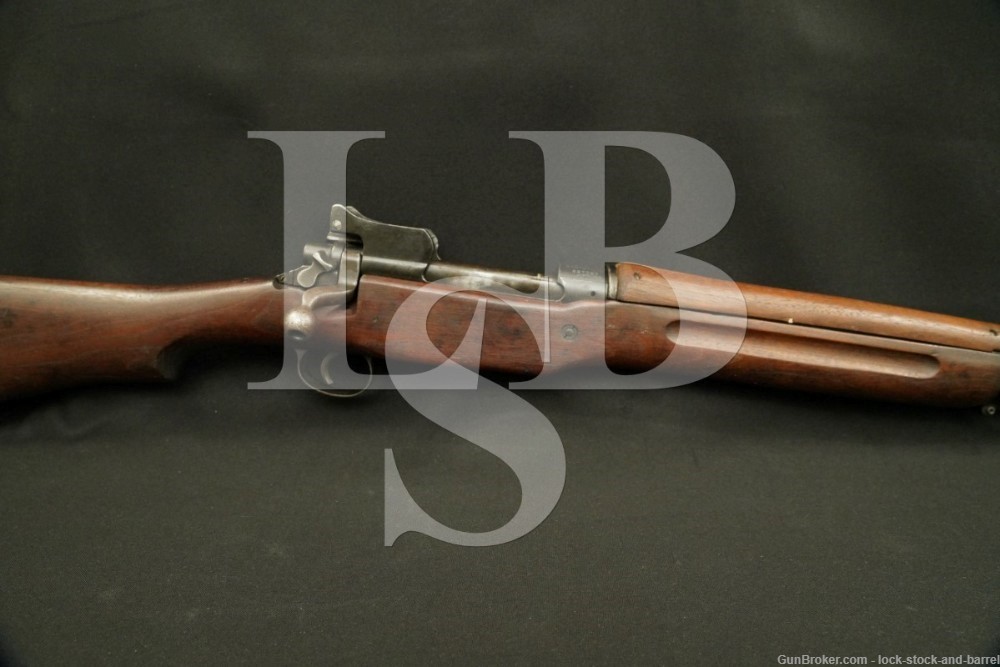 Markings: There is no visible import mark. The front of the Eddystone barrel is marked  “E / flaming bomb / 12-17” . The top of the receiver is marked “U.S. / MODEL OF 1917 / EDDYSTONE / 827767”. The left side of the receiver and the top of the bolt handle are both stamped with a “flaming bomb”. The top left of the receiver (twice) and the bolt release are marked with “eagle head” inspection stamps. The bottom of the bolt handle is marked “W” for Winchester and “NS” for nickel steel. There are a few other small marks on the metal parts. The  left side of the stock, above the trigger, is marked “3 GM-K in a rectangle” which is an Arsenal Rebuild stamping.

Stock Configuration & Condition: The hardwood stock has a straight grip, cutout for the bolt handle, finger grooves, nosecap with bayonet lug, stacking loop, two sling loops, barrel band, a through bolt, reinforcing pin, and a metal buttplate with a hinged door for storage. The buttplate shows scrapes, discoloration from oxidation, and light surface erosion. The belly of the stock shows deep scrapes which have removed areas of surface wood. The wood shows several other scrapes, scratches, and compression marks. Many have damaged small portions of the surface wood. Most of these marks have been oiled over. The LOP measures 13 ¾ inches from the front of the trigger to the back of the buttplate. The stock rates in about Very Good overall condition.

Overall Condition: This rifle retains about 90% of its metal finish as refinished. The barrel and bottom metal have small scratches and oxidation showing through the new finish. The receiver has areas of surface erosion & pitting showing through the new finish. The metal shows scrapes, small scratches and discoloration from oxidation. The screws show heavy use. Most of the markings are deep. Overall, this rifle rates in about Good to Very Good condition as refinished.

Our Assessment: This Eddystone Model 1917 was made during WWI. We don’t know if it saw actual combat but it was around for part of WWI and all of WWII. It has deep Eddystone markings on the receiver and barrel. It must have seen some use as it was eventually Arsenal Rebuilt and refinished. This Eddystone Model 1917 is over a 100 yrs old so it has seen some use. It looks good for its age and it can still do tons of work at the range. It will add to your WWI, WWII or Military collection. Good luck.