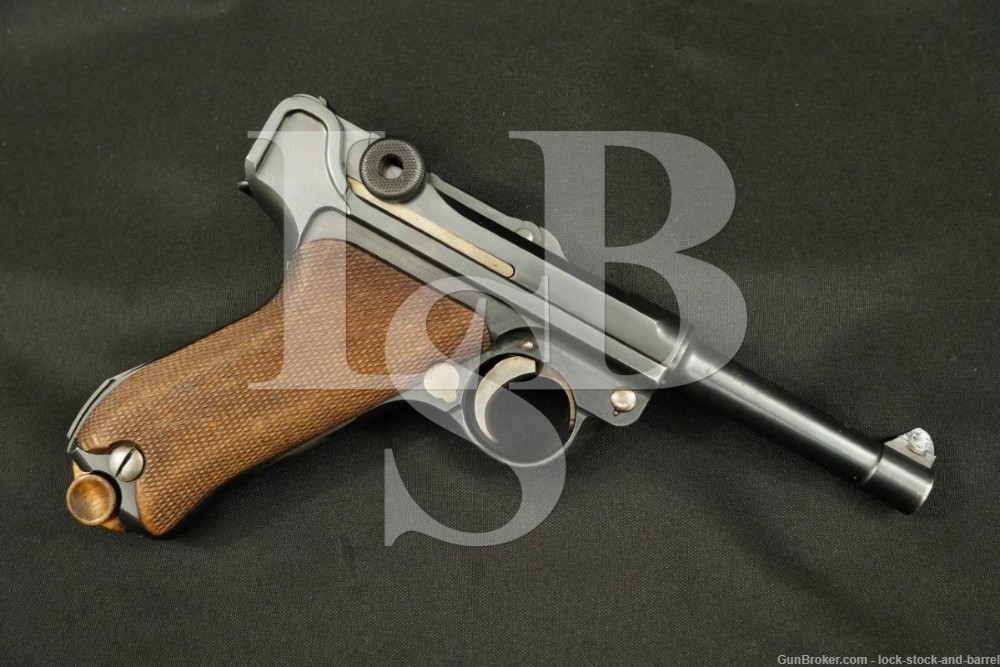 Stock Configuration & Condition: The grips are two-piece checkered wood. The grips show light handling wear with a few scattered light marks. The left panel has a small chip-loss at the top-rear by the safety lever. The checkering’s points are generally blunted, but the checkering is well defined. There are no cracks. Overall, the grips are in Good-Very Good condition as partially not original to the gun.

Type of Finish: Blued with some small parts strawed.

Bore Condition: The bore is mostly bright with sharp rifling. There is some minor erosion and stubborn fouling in the bore.

Overall Condition: This pistol retains about 90% of its current metal finish. The finish is thinning at most edges with a patch of more notable finish wear on the fronstrap. The barrel has some spots of light surface erosion on the top-right toward the rear. The controls have handling wear. There are a few other scattered spots of light surface oxidation and some light nicks and scratches, both under and through the finish. The pistol has light operational wear. The screw heads are tool marked with strong slots, the left screw head has been ground almost flat. Most markings are clear, though we believe some have been removed or replaced (see Our Assessment). Overall, this pistol is in about Very Good-plus condition as re-worked.

Box, Paperwork & Accessories: This pistol comes with a single tin-plated 8-round magazine with wood floorplate. The magazines show light operational wear, spots of light erosion on the right toward the top, intact feed lips and a strong spring.

Our Assessment: The Luger (Pistole Parabellum or P-08) is perhaps the most aesthetically and ergonomically pleasing of all autoloading centerfire pistols. It is also one of the strongest, most accurate and most recognizable service pistols ever made. Georg Luger developed his famous pistol in 1898-1899 (starting with the Borchardt/Luger transitional pistol). The Luger is, essentially, a much improved Borchardt type pistol, which was itself based on the toggle action concept used by Sir Hiram Maxim in the world’s first practical machine gun. Adopted by the German Army in 1908, it would go on to see extensive issue in the Great War. The Luger was so well liked and reliable that it was still being made and issued to German troops well after the P38 was adopted by the army. This DWM appears to be a Military 1914 made between 1916 and 1918. After the war, German arms production was severely curtailed by the Allies, with restrictions on pistols including barrel length and caliber limitations. This example appears to have been a military pistol which was re-worked for export on the commercial market. There is no date marked on the chamber ring and Imperial markings are not present, but the pistol has military-style serial placement. The serial marking on the commercially proofed, export-marked barrel appears to have been applied by hand, likely due to an original 4″ 9mm barrel being replaced with the current 3 3/4″ .30 Luger barrel, which would have met the Versailles Treaty restrictions. The finish appears to be of factory quality, but the machine marks in the sides of the frame at the rear are softer than we’re used to seeing and close inspection shows areas where military markings would have been placed which have been removed. All of this combines to support that this pistol was re-worked from a wartime production pistol to comply with the Versailles restrictions after the war. This would make a nice addition to a Luger collection and represents an interesting item from the inter-war period, as well as having a nice bore for those want to shoot their Luger. Please see our photos and good luck!