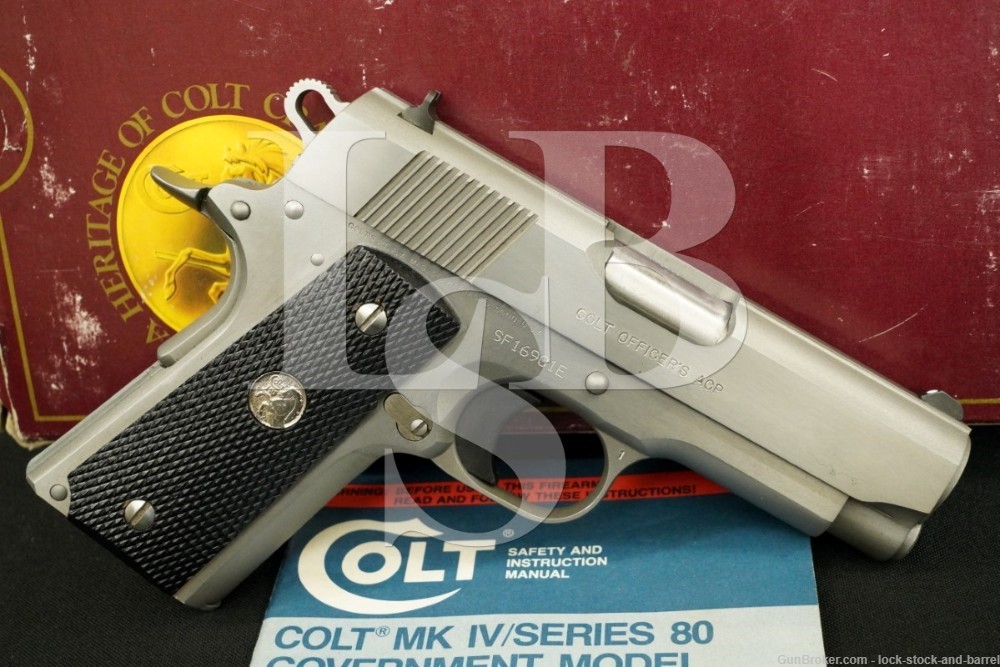 Stock Configuration & Condition: The grips are two-piece checkered black wood with silver-colored Colt 150th Anniversary medallions. The grips have minor tool marks around the screw holes. Otherwise, there are only light handling marks The checkering is generally sharp. There are no chips or cracks. Overall, the grips are in Fine-plus condition as not original to the gun.

Overall Condition: This gun retains about 95% of its metal finish. There are some scattered minor nicks, scuffs and scratches. The frame has outlines around the grip panels which are likely from previously installed grips. The action has minor operational wear. The screw heads are sharp. The markings are clear. Overall, this pistol is in Fine condition.

Mechanics: The action functions correctly. The trigger is crisp. The slide to frame fit shows little play. We did not fire this pistol. As with all used firearms, a thorough cleaning may be necessary to meet your maintenance standards.

Box & Accessories: This pistol comes in a maroon cardboard Colt box with non-matching label, two-piece styrofoam tray, manual, and a single stainless 6-round Colt magazine. The box has light-moderate storage wear with fraying and tears at edges and corners. The magazine shows minor operational wear with intact feed lips and a strong spring.

Our Assessment: In the 1970s, the Rock Island Arsenal began production of a shortened 1911 for use as a General Officer’s pistol. These pistols were built only for issue to Generals and were not available to the general public. The idea of a compact 1911 was already around; the Commander had been in production for some time up to that point and gunsmiths had made more compact 1911-style pistols as one-off custom guns. Detonics was one of if not the earliest companies to introduce a production 1911-style pistol smaller even than the Commander, their Combat Master. Colt took some time to react to the popularity of these guns and then introduced the Officer’s ACP in the mid-’80s. This is a later example, produced in 1997 and is in Fine condition with 95% of its finish, a bright bore and strong mechanics. In addition to being a stainless gun, it is also an Enhanced model with beavertail grip safety, skeletonized hammer, and under-cut trigger guard. With its shorter barrel and frame, this pistol brings more concealability to the classic 1911 design and with its 6-round magazine, it doesn’t even compromise too much on capacity vs. a full size. The pistol has been equipped with an earlier set of 150th Anniversary Colt grips from 1986, but being made in 1997 you can just think of them celebrating the 150th anniversary of the 1847 Walker! As great of a carry gun as this is, it’s also a Colt and collectors may be interested in adding this pony to their stable. Please see our photos and good luck!