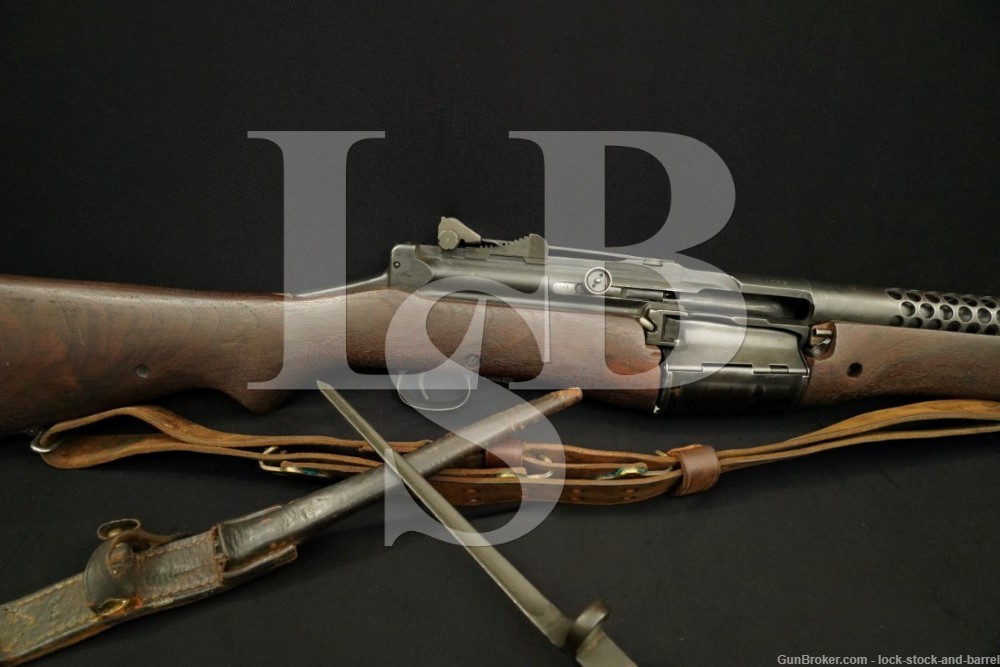 Markings: The top of the receiver is marked with patent information, the serial number “A4005”, “CAL. 30-’06 SEMI AUTO.” and “ ‘JOHNSON AUTOMATICS’ / MODEL OF 1941 / MADE IN PROVIDENCE, R.I., U.S.A.”. The right rear of the receiver is marked “CRANSTON / ARMS / CO” in an inverted “triangle” with a small “star” above it. The “triangle” was a Dutch National symbol and the small “star” is a Dutch acceptance mark (page 251 of Bruce Canfield’s book, Johnson Rifles and Machine Guns). The side of the bolt is marked “B2797”. Johnson made no attempt at the factory to use matching part numbers (page 251). The top of the buttpate is marked with what appears to be a partial “2481” stamping. The replacement barrel is unmarked. The bayonet is unmarked. The bayonet belt frog is marked “1367”.

Sights / Optics: The front sight is a post set between two protective ears. The rear sight is a windage adjustable aperture. The adjustment knob functions. The aperture is set on a sliding elevator that is marked “M2” on the left. It is marked “METERS 0-1000” and “1 3 5 7 9” on the right.

Stock Configuration & Condition: The 2 piece oil stained hardwood stock has a pistol grip, several holes for mounting screws, channel under the forearm for the takedown lever, 2 sling loops, and a metal buttplate. The hole on the right front of the forearm is a takedown button. It can be pressed with the tip of a bullet to release the barrel takedown lever that is on the bottom front of the forearm.
The buttplate shows scratches, worn checkering, and oxidation. The top of the top of the grip shows a partially filled surface repair. The rear tang of the receiver has about ? of an inch of side to side play. The wood shows scrapes, small scratches and small compression marks. Most of the marks are light. They have been oiled. The 2 screw holes on the butt have been filled. The LOP measures 13 ? inches from the front of the trigger to the back of the buttplate. The stock rates in about Very Good overall condition as refurbished.

Finish Originality: Original. Areas of the metal have been treated with cold blue.

Overall Condition: This rifle retains about 92% of its metal finish. Areas of the metal have been treated with cold blue. The metal shows scrapes, small scratches, and areas of discoloration. The magazine has discoloration from oxidation and an area of surface erosion bleeding through the cold blue finish. The front of the barrel shroud shows thinning and several small scratches. The trigger guard shows discoloration from oxidation. The screw heads show heavy use. The markings are crisp. Overall, this rifle rates in about Very Good Plus condition.

Mechanics: The action functions correctly. We have not fired this rifle. As with all previously owned firearms, a thorough cleaning may be necessary to meet your maintenance standards.|
The bayonet mounts to the rifle properly.

Our Assessment: The standard American service rifle during World War II was the M1 Garand, but the Model of 1941 Johnson was also procured during WWII. The 1941 Johnson is prized by collectors due to its scarcity. The number of Johnson rifles acquired by the United States during the war numbered in the hundreds, it was only issued to a specific U.S. Marine Corps unit, and the rifle was purged from the USMC inventory before the end of World War II.
Melvin Johnson developed a recoil-operated firearm mechanism he believed to be superior to the Garand’s gas-operated system. He was able to persuade the U.S. Army Ordnance Dept. to hold an informal test of his rifle in June 1938. The Johnson rifle performed relatively well in the tests but was not adopted. Johnson turned to other nations in an attempt to market his rifle and light machine gun. Johnson was able to sell his weapons to the Netherlands Purchasing Commission (NPC) who needed to arm the colonial forces in the Dutch East Indies.
In Aug, 1940 the NPC placed an initial contract for Johnson rifles & light machine guns as well as spare parts & accessories. At the time Johnson Automatics did not have the production capabilities to fulfill the contract. Johnson partnered with the Universal Winding Company of Cranston, Rhode Island to form the Cranston Arms Co.; hence the Cranston Arms Co. “triangle” stamping on all Model 1941 Rifles. The “triangle” was a Dutch National symbol.
A total of 21,988 Model of 1941 Johnson rifles were manufactured by the time production ceased, which was 1,588 rifles more than the Dutch ordered. The Johnson company sold 1,000 of the extra Model 1941 rifles in 7×57 mm Mauser to the government of Chile.
Not long after the initial shipments of the Johnson rifles and light machine guns left the Rhode Island plant, the East Indies fell to the Japanese and the remaining rifles were embargoed in the United States. Only about 3,000 Johnson rifles had been shipped prior to the embargo.
Johnson barrels can be quickly removed & replaced. This led to some of these embargoed rifles eventually being procured by Maring Parachute battalions. Marine paratrooper Capt. (later Lt. Col.) Harry Torgerson stated that these rifles were used by “select scout-snipers” during the Guadalcanal campaign.
The Johnson rifles issued to Marine Parachute Regiments were standard Dutch-production guns. The limited number of Johnson rifles performed well in combat. One of the more notable achievements was that of Platoon Sgt. Harry M. Tully of the 1st Parachute Battalion. He was awarded a Silver Star when he used his Johnson rifle to kill 42 Japanese on the Solomon Islands at ranges up to 800 yards.
This Johnson Model 1941 looks good and has a strong & bright bore. The wood has been oiled and areas of the metal have been treated with cold blue. The replacement barrel is in great shape. The rifle comes with a Model 1941 bayonet & scabbard which are rare. The Model 1941 bayonet is lightweight so that it would not interfere with the rifle’s short-recoil. The rifle uses an internal 10 round magazine that can be fed with 5 round stripper clips. This Model 1941 Johnson has great markings on the receiver and will add to your WWII collection. Good luck.