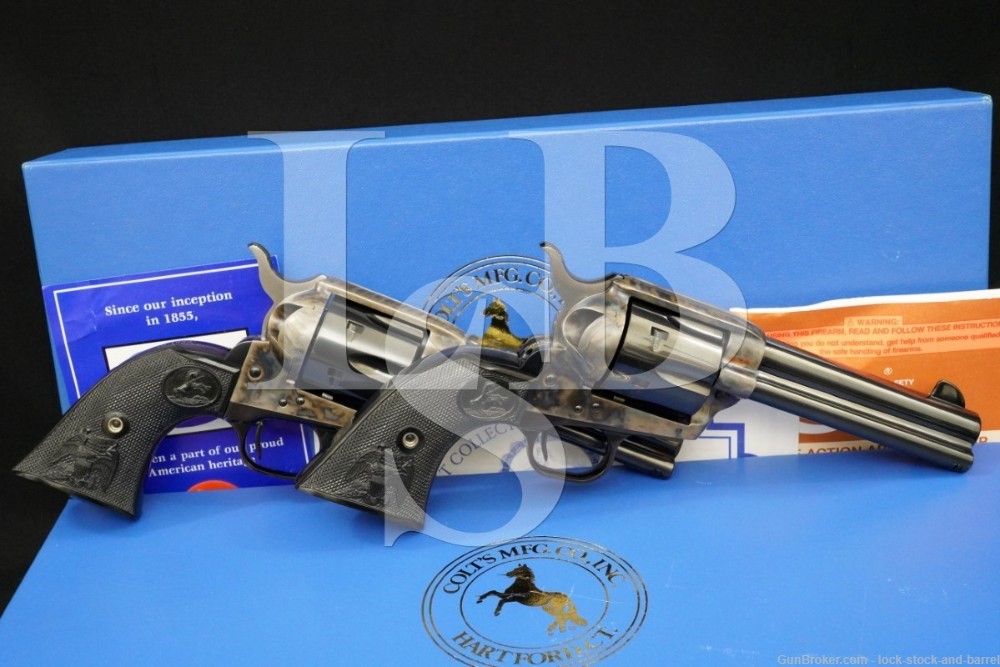 Sights / Optics: The front sights are quarter-round blades fixed to the fronts of the barrels. The rear sights are square notches in the topstraps.

Stock Configuration & Condition: Each revolver’s grips are two-piece checkered black hard rubber with American Eagles at their bottoms and rampant colts in oval at their tops. The grips have no notable wear or damage, only light handling marks. The checkering is sharp. There are no chips or cracks. Overall, the grips are in Excellent condition.

Bore Condition: The bores are bright, their rifling is sharp. There is no erosion in the bores.

211016JL11: This revolver retains about 97% of its metal finish. The balance is mostly minor operational wear, primarily scattered minor turn-wear on the cylinder. There are a few other scattered minor marks. The trigger guard assembly has a plum hue. The screw heads range from sharp to lightly tool marked with strong slots. The markings are clear. Overall, this revolver is in Fine-plus condition.

211016JL12: This revolver retains about 97% of its metal finish. The most notable wear is on the bottom of the barrel, appearing to be from the cylinder pin during disassembly/assembly. The cylinder has minor turn-wear. There are a few other scattered minor marks. The trigger guard assembly has a plum hue. The screw heads range from sharp to lightly tool marked with strong slots. Overall, this revolver is in Fine-plus condition.

Mechanics: The actions function correctly. The revolvers appear to have had action jobs performed, with very smooth actions and light mainsprings. The cylinders lock up with very little play on each chamber. The triggers are crisp. The cylinder bushings are fixed. We did not fire these handguns. As with all used firearms, a thorough cleaning may be necessary to meet your maintenance standards.

Box, Paperwork & Accessories: Each revolver comes in a two piece blue cardboard Colt box with an assortment of factory paperwork including manual. Each box comes in a white cardboard sleeve with serial-matching label. The blue boxes show only minor storage wear, mostly at corners. The white sleeves show light storage wear, with one of 211016JL12’s small ears torn off.

Our Assessment: Colt’s Single Action Army is an icon of the American West. From its adoption in 1873 as the official sidearm of the U.S. Army to its use by lawmen, outlaws, pioneers and settlers, this single action revolver will be forever linked to the late 19th an early 20th centuries in America. Their iconic status was renewed in the era of the silver screen, seen in just about any Western movie ever made. This would in turn inspire the creation of a new shooting sport in the 1980s, the Single Action Shooting Society was born. This is a beautiful pair of Single Action Army revolvers, made in 2001. The pair was special-ordered with custom serial numbers for a member of the Single Action Shooting Society, SASS# 31337. The revolvers have 4 3/4″ barrels, blue and case color finish, and are chambered for the classic .45 Colt cartridge. These gorgeous guns appear to have spent more of their lives in their factory boxes than out, with signs of light use since leaving Colt, and having had an action job performed. They will make a fine addition to any collection, especially for a Cowboy Action Shooter. Please see our photos and good luck!