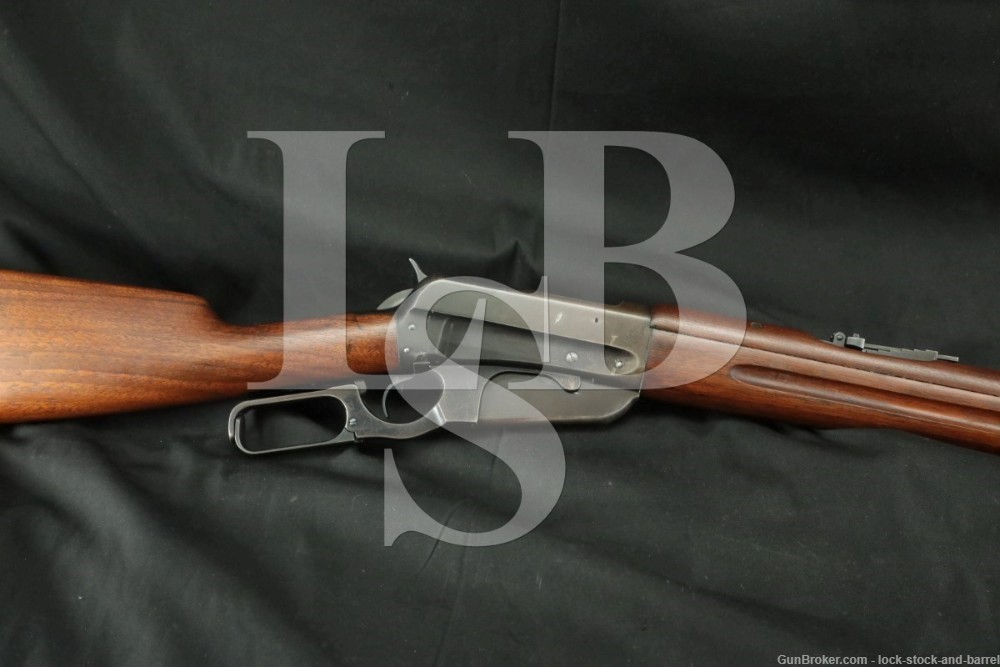 Sights / Optics: The front sight is a blade pinned to a slotted base at the front of the barrel. The rear face of the blade has been painted white. The rear sight is a folding ladder-style sight. When folded down, there is a “V”-notch and the slider serves as an elevator with the left of the base marked with even numbers from 4-14. When up, the ladder is marked on alternate sides from 15 to 31 and the slider has a “V”-notch. There is a “V”-notch at the top of the ladder, marked 32.

Stock Configuration & Condition: The stocks are three-piece piece smooth walnut with banded, finger-grooved forend, a handguard around the rear sight secured with two internal spring-clips, straight grip, straight comb, and steel carbine-style buttplate with sliding trapdoor. The stocks have light handling wear with some scattered minor nicks, scuffs and scratches. There is a more notable scrape on the top-front of the handguard. There are no chips or cracks. There are infrequent spots of thinning finish and there is some pooled finish in the right finger-groove of the forend. We don’t see any evidence of sanding, but it does appear that a new finish has been applied. The LOP measures 12 5/8″ from the front of the trigger to the back of the buttplate. The plate has wear at the heel and toe with thinning finish at the edges and scattered light surface oxidation. Overall, the stocks are in about Very Good-plus condition as refinished.

Bore Condition: The bore is mostly bright with sharp rifling. There is some minor erosion at the muzzle end of the bore. Our gauge shows an ME of about 0.75.

Overall Condition: This rifle retains about 75% of its metal finish. The finish is thinning at all edges. Most of the balance is in areas of the receiver, magazine and lever which have gone to a light patina, with the top of the bolt showing a similar patina. The bottom-front of the magazine is worn to white. There are some scattered light nicks, scuffs and scratches with three more notable dings on the right of the receiver toward the front. The action shows operational wear. The screw heads range from sharp to lightly tool marked with strong slots. Most markings are clear and crisp. The left-side barrel marking was roll-marked where the barrel tapers forward of the chamber. The front and rear of this marking are deep and crisp with the middle portion light, but legible. Overall, this rifle is in Very Good condition.

Our Assessment: The 1895 Winchester was the first lever action model to incorporate a non-detachable box magazine. This is the model Teddy Roosevelt called his “Big Medicine” that he used in hunting here and in Africa. With its quick handling characteristics, box magazine and spitzer bullet capability, the Model 1895 changed the world of sporting rifles forever. This rifle was used by major powers worldwide, with Russia alone purchasing nearly 300,000 1895’s just before World War I. In 1898, the United States ordered 10,000 of the rifles in musket form with handguard for use in the Spanish-American War, but the war ended before they could be delivered. One hundred were issued for field testing in the Philippines and the remaining 9,900 were sold to M. Harley Company. Many of these were shipped to the new Cuban government in 1906 and some found their way to Pancho Villa’s troops in Mexico. The U.S. Government also ordered carbines, but we can’t find records as to how many. This saddle ring carbine was made in 1921 during the inter-war years. It is a nice example chambered in .30-40 Krag. Its distinctive two-piece forend and military-style folding ladder sight give it a martial appearance, though this is a commercial gun. It looks like it was fairly well maintained with much of its original blued finish, a nice bore and strong mechanics. This should make a great addition to a collection of Winchester lever-action rifles and could even still serve as a hunting rifle today. Please see our photos and good luck!