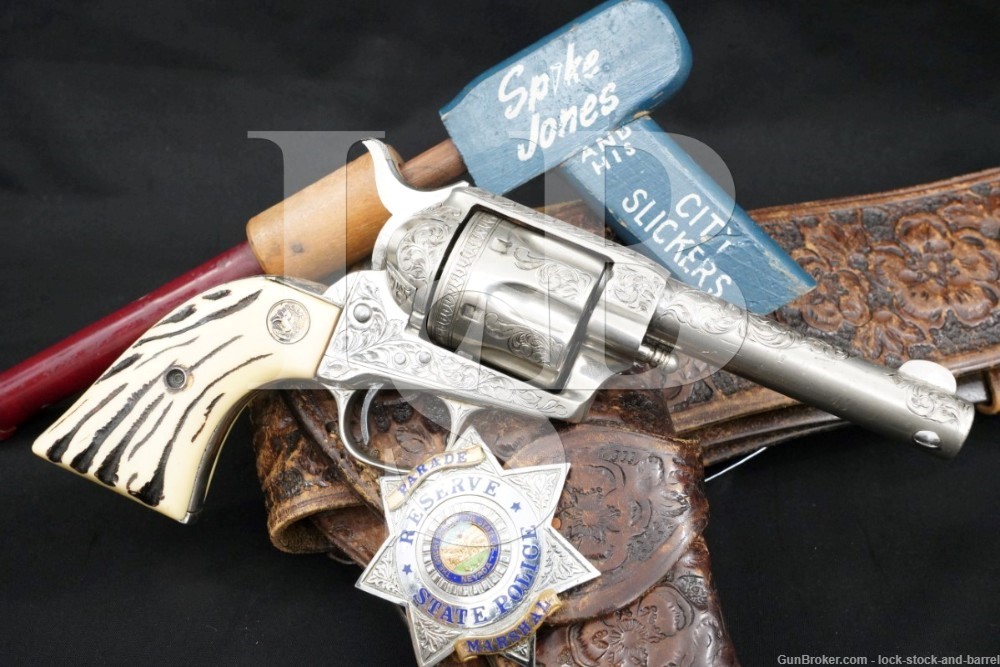 Year of Manufacture: The frame was made in 1875, the revolver was most likely altered in the 1940s-1950s when Spike Jones and His City Slickers were touring.

Markings: The left of the barrel is marked “COLT 44-40”. The left of the frame is marked “PAT. JULY. 2. ???2.”. The bottom of the frame is marked “16970”. The rear of the loading gate has assembly number “797”. The hammer slot is marked “C”. The backstrap has been engraved “To Woody From Spike Jones” and there is decorative foliate-scroll engraving on the barrel, frame, cylinder, loading gate, backstrap and trigger guard. The inside of the right grip panel has “E.B. WOODWARD / LAS VEGAS / NEVADA” hand-written, the inside of the left panel has “E.B.W.”.

Stock Configuration & Condition: The grips are two-piece faux-stag panels with Colt medallions at their tops. The grips have some discoloration from age and handling, but otherwise show minor wear. There are a few scattered minor marks. The medallions show some wear. There are no chips or cracks. The grips have light play to the frame. Overall, the grips are in Very Good-plus condition as not original to the gun.

Finish Originality: Refinished, likely at the time of engraving. Some parts, notably the front sight and cylinder pin, are not original to the gun.

Bore Condition: The bore is gray. The rifling is worn, but visible. There is light-moderate erosion and some light pitting scattered through the bore. The hole for the mainspring housing screw is drilled through and visible in the bore. We suspect that this revolver was used only for firing blanks and it should be inspected by a qualified gunsmith prior to firing with live ammunition.

Overall Condition: This revolver retains about 92% of its current metal finish. There is finish loss at some edges and corners with more notable flaking on the side faces of the hammer. The remaining nickel ranges from bright and shiny to cloudy. There are scattered nicks, scratches and scuffs with infrequent exposed oxidation. Inside the frame around the cylinder, there is some surface erosion, some under and some through the finish. The cylinder has a turn-lineThe ejector housing has been removed and the hole for the housing’s mounting screw is drilled through, visible inside the bore. The firing pin bushing is missing from the frame. The head of the cylinder bushing has wear and erosion, but the shaft of the bushing is in pretty good shape. The screw heads range from tool marked with strong slots to disfigured with useable slots. Remaining markings range from clear to worn and incomplete, most original markings have been removed. Overall, this revolver is in Fair-Good condition as refinished and customized Antique.

Mechanics: The ejector assembly and firing pin bushing are missing, but the action functions correctly. The trigger is crisp. The cylinder has light-moderate play. The trigger is crisp, but a little heavy. We did not fire this revolver. As with all used firearms, a thorough cleaning may be necessary to meet your maintenance standards.

Box, Paperwork & Accessories: This revolver comes with a belt and holster rig with custom belt buckle, a Nevada Reserve State Police Parade Marshal badge and a Spike Jones and his City Slickers pop-gun. The belt, holster, and ammunition slide are all marked as made by R.H. Hoyt in El Monte, California, showing moderate wear, fraying at some edges, and infrequent broken stitching. The back of the belt has “WW / 1945 / Woody Woodward” hand-written. The buckle is made by Stalder Mfg. Co. of Inglewood, California and has “EBW” over a steer head on the front face, showing minor wear. The badge is made by Entenmann of Los Angeles, California, showing light wear on the front face, some discoloration on the back, and a slightly bent pin. The pop gun no longer functions properly, and shows scattered light wear. A photo is included showing the rig, badge and revolver next to a photo, presumably of Woody Woodward, over a plaque marked “THE / SPIKE JONES COLT” / GIVEN TO / “WOODY” WOODWARD / ? MARSHAL – CHIEF OF POLICE – / ?ERIFF – UNDERCOVER OPERATOR – / ?AND MARHSALL OF NEVADA – / GUARD OF THE STARS.” (the plaque is not included, only the photo).

Our Assessment: Colt’s Single Action Army is, perhaps more than any other, an iconic American pistol. It was the U.S. issue sidearm for the last two decades of the 19th century, used by pioneers, outlaws and lawmen across the expanding nation, and captivated audiences on the silver screen and television (and still does, today). This example has been customized with new grips, decorative engraving and a nickel finish as a gift from Lindley Armstrong “Spike” Jones to “Woody” Woodward. Jones was the leader of Spike Jones and His City Slickers, a band which specialized in spoofing contemporary and classical music by punctuating the tunes with various sound effects and comedic lyrics or vocals. Notable examples of their work include a hilarious rendition of “Ghost Riders in the Sky” as well as their 1942 send-up of Adolf Hitler, “Der Fuehrer’s Face”. The group starred on a number of radio programs in the late 1940s and even had their own television shows on NBC and CBS in the 1950s and 1960s. This revolver was a gift from the band leader to one “Woody” Woodward, about whom comparatively less is known. Woodward appears to have been a Parade Marshal for the Nevada State Police. This is an eye-catching revolver, and a neat piece of history, both for its connections to the Old West and to one of the most fun bands from the 1940s-1960s. It will make a great addition to any collection. Please see our photos and good luck!