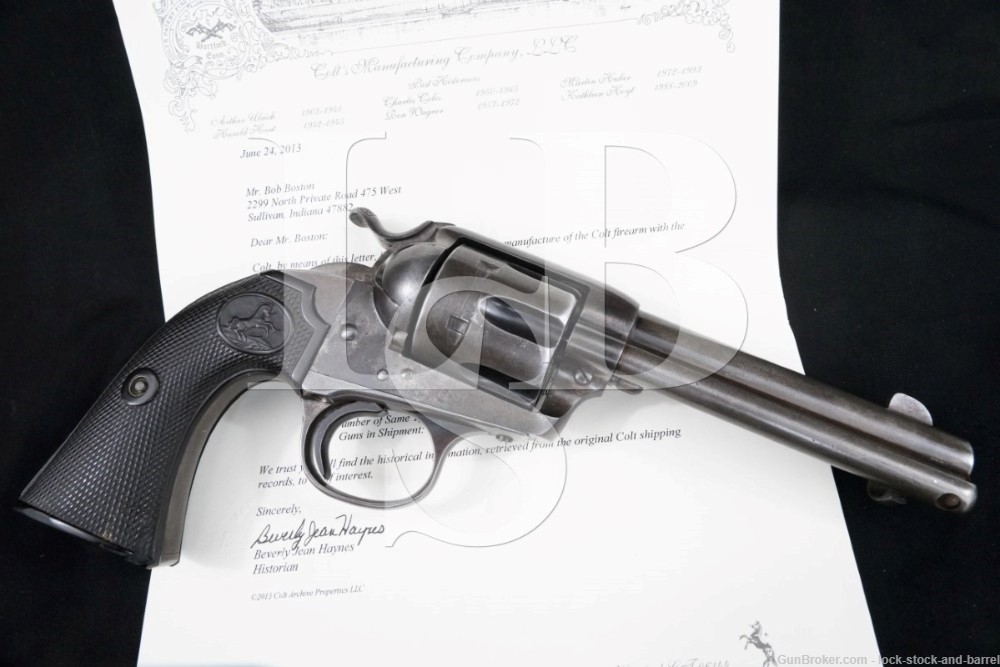 Stock Configuration & Condition: The grips are two piece checkered hard rubber with rampant colts in ovals at their tops. The grips have light handling wear with some scattered light nicks and scuffs, mostly along the edges. The right panel has a small chip-loss at the bottom-rear corner and a larger but partially repaired chip at the bottom-front. Each panel has small cracks on the inside around the screw escutcheons. The checkering is generally well defined. There is pretty good detail in the rampant colts. Overall, the grips are in about Good condition as repaired.

Finish Originality: The finish is Original, a couple of the screws appear to be replacements.

Bore Condition: The bore is light gray with well defined rifling. There is scattered light erosion in the bore with infrequent minor pitting.

Overall Condition: This handgun retains about 5% of its metal finish. Remaining finish is in protected areas such as corners, around the cylinder pin head and on the rear face of the cylinder. Other surfaces have mostly worn to white or gone to a light patina. There are scattered nicks, scuffs and scratches. There is infrequent minor surface erosion. The head of the cylinder pin and the front of the cylinder bushing each have notable wear. The screw heads range from sharp to tool marked with strong slots and there are tool marks around most of the screw heads. The markings range from clear to  worn, but legible. Overall, this revolver is in Good condition.

Mechanics: The action functions correctly, though the trigger is a little bit heavy. The cylinder locks up with minor play on each chamber. We did not fire this handgun. As with all used firearms, a thorough cleaning may be necessary to meet your maintenance standards.

Box, Paperwork & Accessories: This revolver comes with a Colt Archives letter which notes that this revolver shipped February 11, 1899 to Hartley & Graham in New York as one of 10 guns of the same type in the shipment.

Our Assessment: The Colt Bisley was introduced in 1894 as a target pistol. The name Bisley came from the famous firing range in Bisley, England. The Colt Bisley can be distinguished by the longer grip, the wider hammer spur, and the wider trigger. Bisleys were serial-numbered in the range of 156300–331916, in the same sequence as the Single Action Army. This example is a Bisley Model Colt Frontier Six Shooter, chambered for the .44-40 Winchester cartridge. Shipped to notable Colt dealer Hartley and Graham in early 1899, the revolver shows its age, but has a beautiful Old West appearance. With the included Colt Archives letter, this revolver will make a nice addition to a Colt or American West collection and would be a worthwhile candidate for restoration. Please see our photos and good luck!