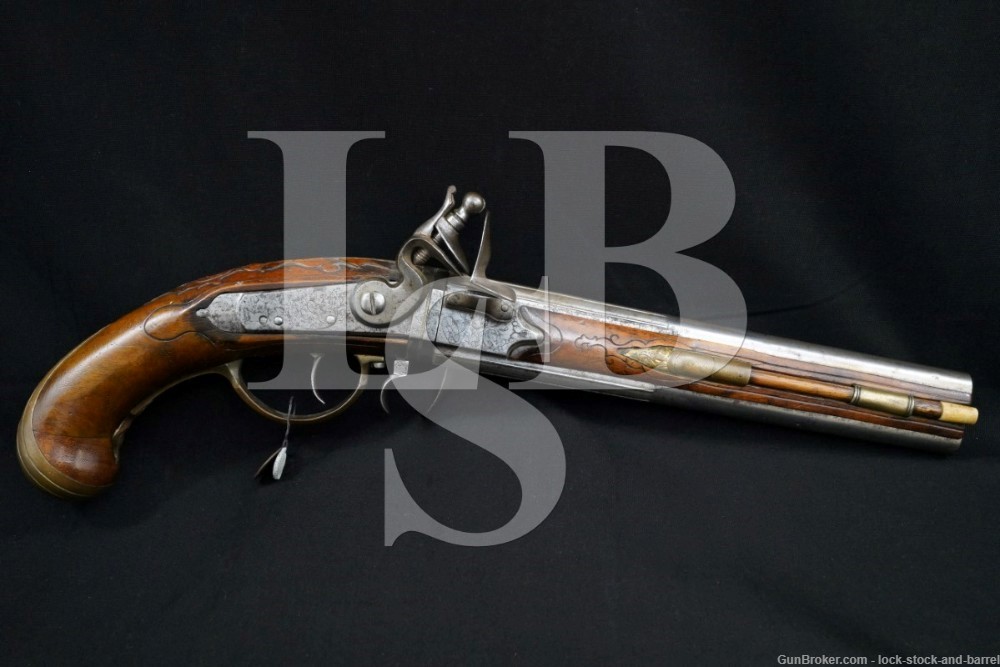 Caliber: Both barrels are .50 Caliber

Stock Configuration & Condition/ Grip: The stock is three piece wood featuring a wood panel on the both sides of the barrels with flash holes and frizzens, the left panel has a brass ferrule and slot for the included ramrod, in addition to a pistol grip with the hammer and a brass pistol-grip cap. The stocks have some light nicks, scuffs, compressions and handling marks. Notably, what appears to be a patch repair or assembly mark is present at the top of the wrist, a similar mark circles the trigger and there is one at bottom of the wrist. There are no chips or cracks. Overall, the stocks are in Very Good condition.

Bore Condition: The bores are dark with scattered patches of erosion.

Overall Condition: The pistol has no metal finish. The brass parts of the gun are tarnished and have gone dark and there is some light verdigris on the trigger guard. The White metal barrels are coated in light-moderate patches of surface oxidation. There are also some light nicks, scuffs and handling marks on the pistol’s metal surfaces. Some of the markings are slightly faded but they remain mostly clear. The screwheads have toolmarks but remain serviceable. Overall, the pistol is in Very Good condition.

Mechanics: The action functions correctly. The barrels can be alternated by pulling a release ahead of the trigger guard. We did not fire this gun. As with all previously owned firearms, a thorough cleaning may be necessary to meet your maintenance standards.

Box Paperwork and Accessories: There is a medallion included with the pistol marked “670”.

Our Assessment: This is a .50 caliber double-barreled flintlock turnover pistol of unknown origin. Turnover double-barreled pistols were originally manufactured primarily in the 18th and 19th centuries (an example can be seen here: https://www.metmuseum.org/art/collection/search/33311), but they were rather uncommon. This pistol appears to be a muzzle-loader of modern manufacture for several reasons. First the engravings do not appear to match the style of artistry that was used in the 18th and early-19th centuries. There is a name on the lock-plate which appears to be “P / Bailey” but it is also not in the script typical of the era. This pistol is very well made and remains mechanically sound, but beyond being a “modern” reproduction from sometime in the mid-late 20th century there is little indication where it originated. This should prove a worthy addition to a black-powder enthusiast’s collection and its rare construction makes it all the more desirable. Good luck on your bid!