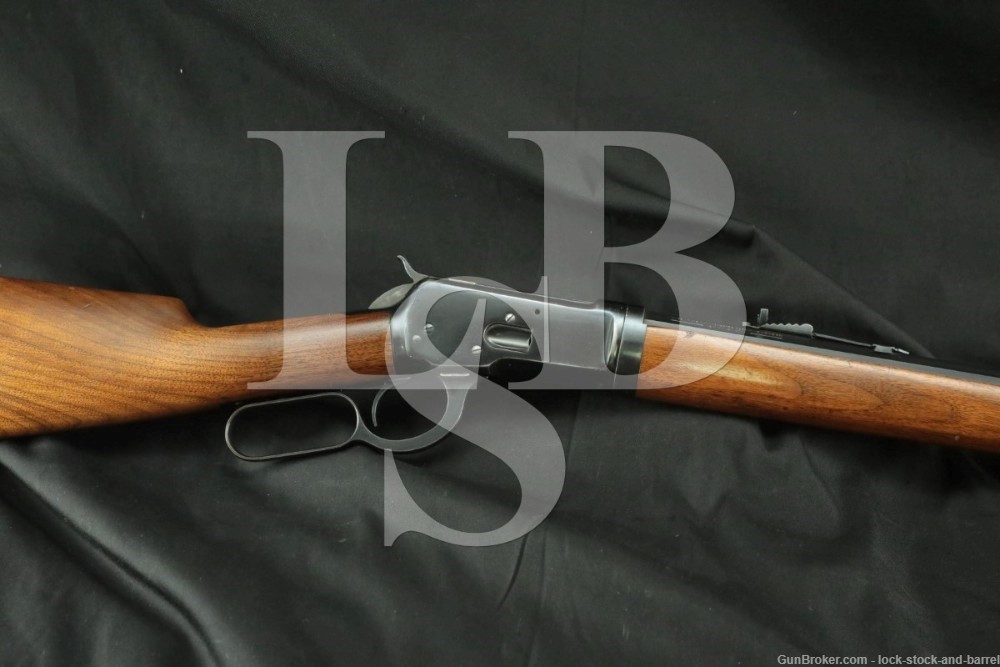 Sights / Optics: The front sight is a Lyman brass beaded blade dovetailed to the front of the barrel. The rear sight is a DW King elevator sight dovetailed to the rear of the barrel. The notch is fine adjustable for elevation with a white aiming reference. It is reversible to present either a square or a “U”-notch. The top tang is drilled, tapped and filled for a peep sight (none included).

Stock Configuration & Condition: The stocks are 2-piece smooth walnut with capped forend, straight grip, straight comb, and shotgun-style buttplate. There is a hairline crack on the top of the wrist at the rear of the top tang. There are areas of thinned finish. There are scattered scuffs, compressions, nicks, dings, and some scratches. Some of the most noticeable marks are on the left of the wrist, left of the forend, and on the right of the forend on the upper edge at the rear. There are no chips or cracks. The LOP measures 13″ from the front of the trigger to the back of the buttplate. The plate has some finish loss, light scabbing, and patina. Overall, the stocks are in Very Good condition.

Bore Condition: The bore is bright. The rifling is shallow but visible. There is no erosion.

Our Assessment: The Winchester Model 1892 rifle and carbine replaced the toggle link action of Winchester’s Model 1873 with a breechblock locked with two rectangular locking bolts that made it much stronger and suitable for the higher pressures of smokeless powder. It was designed by John Browning and was sort of a scaled-down Model 1886 rifle, the first he designed for Winchester. The Model 1892 rifle was popular with ranchers and later was the rifle of choice for western movies and TV shows, John Wayne used both M1892 rifles and carbines in many of his western movies. The M1892 rifles again became popular in the 1980s with the advent of Cowboy Action shooting, as they were smooth and dependable. This is an early Winchester Model 1892 Rifle made in 1902. The rifle is chambered in .38-40 Winchester and has a 24″ octagonal barrel and a takedown receiver. With the markings on the barrel, we suspect that it is a replacement, the “WP” proofs were not introduced until 1905. This rifle has “WP” proofs but they are off center, it was probably sent to Winchester for a repair which may have been when it got its new barrel and finish. This rifle is in Very Good condition, appearing to have spent its 120 year life in the care of responsible sportsmen. While the rifle shows honest wear consistent with its age, it retains a surprisingly nice bore and strong mechanics. The .38-40 Winchester cartridge was based on the popular .44-40 but necked down to about .40 caliber, giving it a little bit higher velocity. It was once a popular round for hunting small-medium game as well as for defense. This rifle should be of interest to the Winchester collectors and still has a very shootable bore. Please see our photos and good luck!