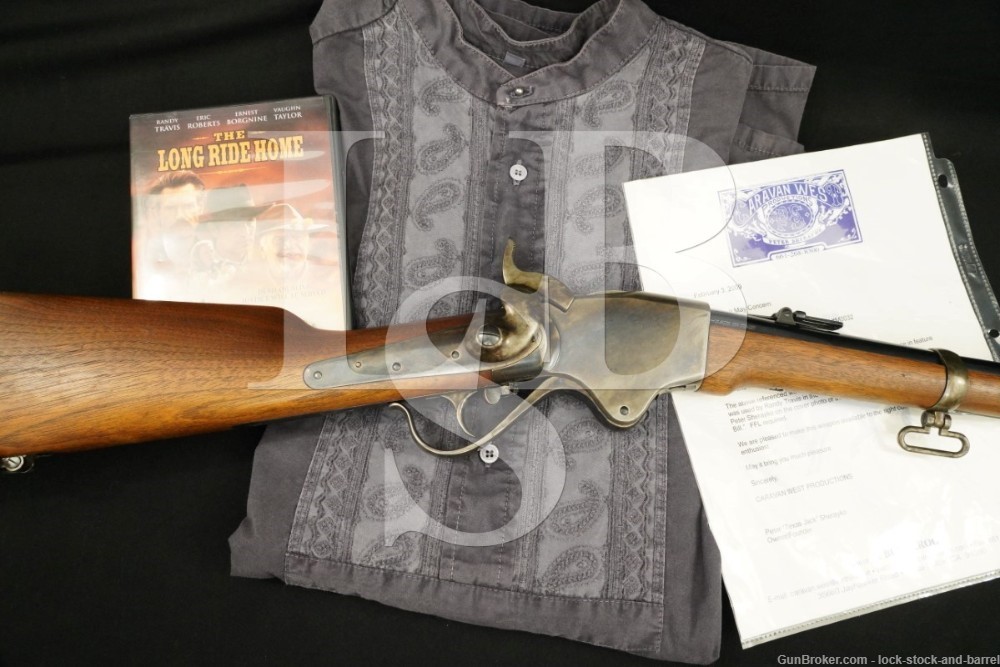 Stock Configuration & Condition: The stocks are two-piece smooth walnut. The forend has a metal band secured with a spring clip and there is also a screw securing the forend to the barrel. The buttstock has a straight grip, straight comb and steel carbine-style buttplate. There are sling swivels mounted to the belly and barrel band as well as a saddle ring on a sling bar mounted to the left of the wrist. The forend has a crack at the bottom-rear, otherwise showing only a few minor marks. There are no chips in the forend. The buttstock has some more notable nicks, scuffs and scratches, mostly on the right side. The buttstock has no chips or cracks. The LOP measures 12 7/8” from the front of the trigger to the back of the buttplate. The buttplate has some light wear, mostly at the heel and toe, and there are scattered patches of surface erosion. Overall, the stocks rate in about Very Good condition.

Overall Condition: This rifle retains about 96% of its metal finish. The finish is thinning at some edges, most notable at the muzzle and the bottom-front of the receiver. The barrel has strong blue finish with some scattered minor nicks and scuffs, including light wear in front of the barrel band from removal/installation. The receiver has generally strong case color with some muting toward the bottom-front and scattered minor surface oxidation. The action shows operational wear. There is wear on the Stabler cut-off and it is bent slightly (see Mechanics). The screw heads range from sharp to tool marked with strong slots. The markings are clear. Overall, this rifle rates in about Very Good condition.

Mechanics: The Stabler cut-off is bent slightly, causing it to interfere with the lever when it is engaged. When disengaged, it does not interfere with the lever. Otherwise, the action functions correctly. The hammer has a half-cock safety position.  We have not fired this rifle. As with all used firearms, a thorough cleaning may be necessary to meet your maintenance standards.

Box, Paperwork & Accessories: This rifle comes with a single magazine in the buttstock. The magazine has minor wear with notable erosion on the tab at the rear. Also included are a DVD copy of “The Long Ride Home”, a purple shirt worn by Randy Travis in the film, a photo of Travis wearing the shirt and holding the rifle, and a letter of provenance from Caravan West Productions confirming that this rifle was used in the filming of “Long Ride Home” as well as being held by Peter “Texas Jack” Sherayko on the cover of the film “Cody: An Evening with Buffalo Bill”.

Our Assessment: The inventor of the Spencer Carbine was Christopher Miner Spencer, one of the leading figures of the machine tool industry. The Spencer carbine was different from any other firearm of its time. It was accurate; fired rapidly; had a long effective range; and held seven metallic cartridges that weren’t affected by moisture. It could be fired more rapidly than a Colt style revolver and reloaded in one-tenth the time. By the end of the Civil War, more than 144,000 Spencer rifles and carbines had been manufactured; over two-thirds of which were purchased by the U.S. government. Spencer rifles and carbines met with high praise from those who were equipped with them, and with respect from those who faced them in battle. In its first combat test, Spencer-armed Union troops under the command of Colonel John Wilder earned the nickname “Lightning Brigade” when they defeated a numerically superior Confederate force at the Battle of Hoover’s Gap, Tennessee on June 24, 1863. The Spencer carbines remained in use by the U. S. Army’s mounted troops until the late 1870’s. This Italian-made reproduction has its own history. This carbine was owned by Caravan West Productions where it was featured on the cover of “Cody: An Evening with Buffalo Bill” where it was held by Peter “Texas Jack” Sherayko. It was also used in the filming of the movie “The Long Ride Home”, starring Randy Travis, Eric Roberts, and Ernest Borgnine. This is all detailed in an included letter of provenance provided by Caravan West Productions. Also included is a shirt worn by Randy Travis during filming and a picture of Travis wearing the shirt and holding the rifle. This will make a great addition to any collection, especially with its detailed provenance and included memorabilia. Please see our photos and good luck!