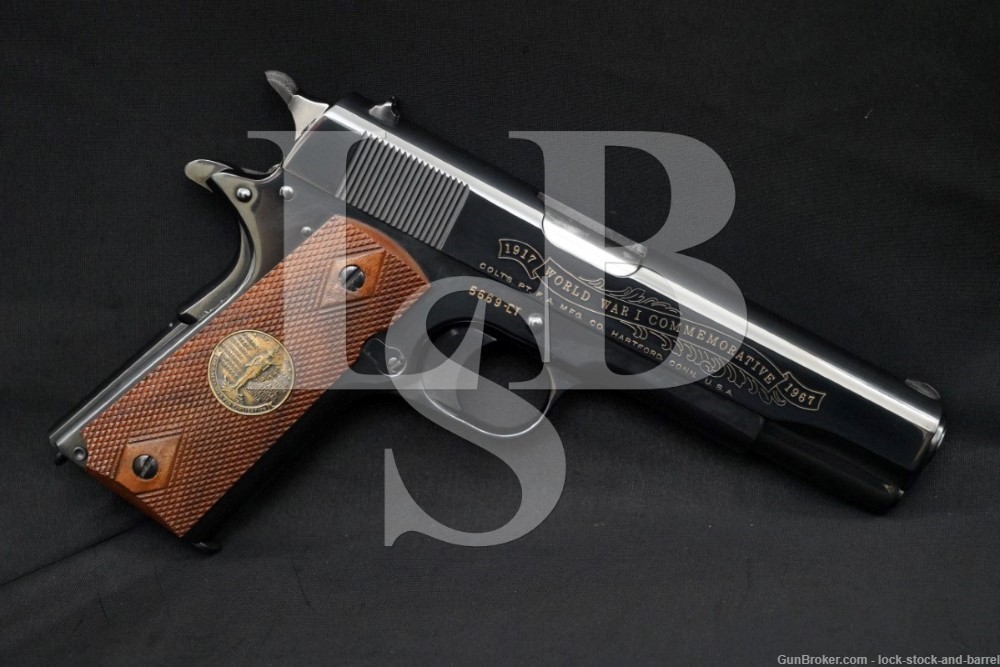 Markings: The markings have gold-color fill. The right side of the slide is marked with a banner reading “1917 / WORLD WAR I COMMEMORATIVE / 1967” and “COLT’S PT.F.A. MFG. CO. HARTFORD, CONN. U.S.A.”. The chamber is marked “COLT .45 AUTO” and also has a “VP” proof. The right side of the frame with the serial number. The left side of the slide is engraved with a battle scene of a machine gun crew with a town in the background and at the rear with the Rampant Colt logo.

Stock Configuration & Condition: The grips are checkered wood with medallions and double diamonds. The left grip has a medallion of an American eagle marked “1917*1918 / WORLD WAR” and a rectangular plaque marked “CHATEAU THIERRY”. The right grip is marked with a medallion of an American soldier and marked “U.S.A. / THE GREAT WAR FOR CIVILIZATION” and with the names of our allies. There are a few light handling marks. The checkering is mostly sharp but there are a few nicked peaks. The grips rate in about Fine Plus condition.

Overall Condition: This pistol retains about 96% of its metal finish. There are some little nicks and dings, the most noticeable are on the trigger guard and frontstrap. There is a faint takedown mark on the left side of the frame. There are a couple of faint spots of frost. There are light handling marks. There is light operational wear. The markings are clear and the screw heads are sharp. The pistol rates in about Fine condition.

Our Assessment: The best of man can only be seen in the worst of circumstances. This gorgeous 1911 pistol commemorates the Battle of Chateau-Theirry, a battle that took place during the Second Battle of the Marne operations that signaled the end of a long string of German victories. The Germans had pushed forward and reached the north bank of the Marne River at Chateau-Theirry, a mere 59 miles from Paris, in May 1918. June 1, 1918 would see the beginning of the Battle of Belleau Woods, where Allied and German forces would fight back and forth over wheatfields, forests, and trenches for the next several weeks. The Germans would attempt to split the Allied forces in two with a great bombardment and assault on the Allied forces on July 15, 1918, only to be bombarded and entrapped themselves. On July 18, 1918, a combined force of French and American soldiers launched a counteroffensive on the front between Fontenoy and Chateau-Thierry, now known as the Battle of Chateau-Thierry. This was one of the first operations the American Expeditionary Forces under General John Pershing undertook, and what could have been a disaster for new soldiers on the front actually started a string of forward pushes that was a turning point in a years-long war. This operation would shape the reputation of the United States as a modern military power and impact the legend of the Colt 1911, a sidearm used extensively by the Allied forces during these last months of WWI. This is a beautiful Colt Government Model 1911 with a high luster blued finish and gold-filled engraving. The pistol also has custom grips with WWI medallions and the name of the battle the pistol commemorates. The pistol is in Fine condition and appears to have seen little use outside of the factory, with very minor marks. This series from Colt commemorates the four major battles our soldiers fought in World War I, the “War To End All Wars”. This one is the Chateau Thierry 1911 made in 1967. This is an amazing tribute to the contribution America has made to keep the world free. Please see our pistols and good luck!