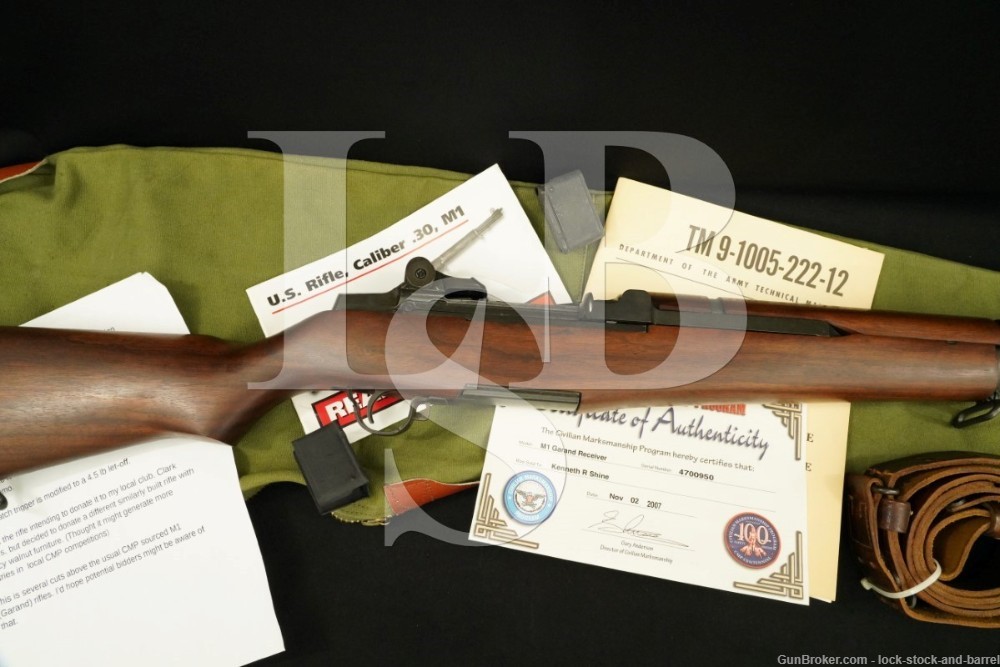 Sights / Optics: The front sight is a blade set between two protective wings. The rear sight is a fully adjustable aperture sight. The windage knob is marked “LEFT arrow” twice and “WRIGHT”. The elevation knob is marked from “2-12” in increments of two and “WCE.

Stock Configuration & Condition: The left side of the stock, above the trigger, is marked with a “boxed” CMP cartouche “CMP / eagle”.
The oil stained hardwood stock has a pistol grip, metal nosecaps, stacking loop, two sling loops and a metal buttplate with hinged metal door for storage in the buttstock. The buttplate shows light scrapes. The wood shows scuffs, light scrapes, and light handling marks. The LOP measures 13 ? inches from the front of the trigger to the back of the buttplate. The stock rates in about Fine overall condition.

Overall Condition: The rifle retains about 96% of its finish. The bottom rear of the receiver shows light thinning. The metal shows scuffs, small scrapes, and light handling marks. The right side of the receiver and front the bolt show light thinning from cycling. The markings on the metal are deep & crisp. Overall, this rifle rates in about Fine condition.

Box, Paperwork & Accessories: The rifle comes with a CMP certificate of Authenticity, owner’s manual, technical manual, reproduction canvas soft case, leather sling, and 2 clips. The certificate is marked with the rifle’s serial number and “M1 Garand Receiver”. The certificate, manuals, and clips are in Fine condition. The sling is marked “KRS” it shows some surface cracking and discoloration. The reproduction soft case is marked “US”. It ishows light soiling and a few small spots of fraying. The sling and soft case are in Very Good Plus to Fine condition.

Our Assessment:The M1 Garand had garnered a well-deserved reputation as the best standardized service rifle of WWII. At the end of WWII large numbers of Garands were in inventory and it was assumed they were sufficient to meet future military needs. That all changed when the Korean War broke out. Springfield Armory ramped up its Garand production line as quickly as possible, but additional sources were needed. International Harvester was contracted to produce M1 Garands in 1951. On April 3, 1952, H&R was given a contract for the production of M1 Garand rifles.
H&R had produced a number of types of firearms for the civilian market, but H&R’s prior experience in military firearm production for the government was primarily limited to the Reising .45 ACP submachine gun that it made during World War II. H&R was able to capitalize on its arms making experience during production and supplied International Harvester with assistance in producing M1 Garands. Unlike the mix of parts found on some IHC M1 Garands, there was typically much more consistency in the H&R rifles including the format of the receiver markings. Unlike IHC, H&R made its own barrels for most of the company’s production run. When International Harvester opted out of its contact, a number of the Line Material Corp. (LMR) barrels on hand were diverted to H&R and used to assemble some late-production rifles. LMR barrels are considered high quality barrels.
This Harrington & Richardson Arms M1 Garand dates to 1953. The receiver was purchased from the CMP in 2007 and the rifle was custom built. The rifle looks great and the metal has deep markings. The 2006 dated Fulton Armory barrel & strong & bright. It comes with a CMP Certificate of Authenticity, owner’s manual, technical manual, reproduction canvas soft case, leather sling, and 2 clips. This is a nice H&R M1 Garand that should do great out at the range.
Our consignor advises the following:
The rifle was built into a competition rifle for CMP matches. The action is blue printed. The barrel has been aligned & squared. The Fulton Armory barrel is a match barrel with a 1.5 MOA guarantee using service grade ammo. The match trigger is set to 4.5 pounds. Unfortunately we do not have paperwork to confirm this. Good luck.