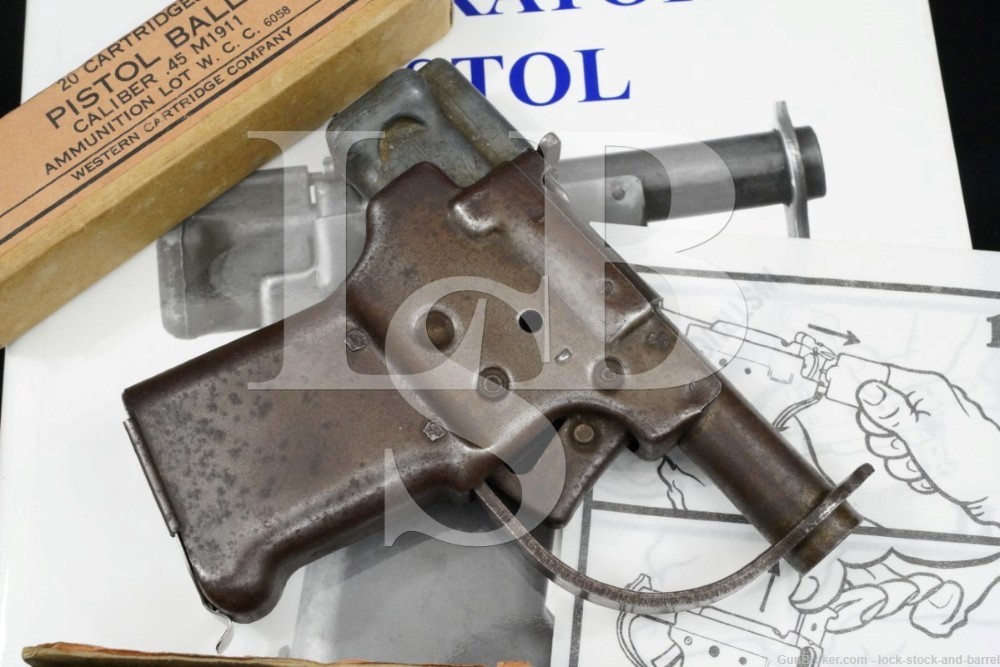 Stock Configuration & Condition: The grips are sheet metal and are integral with the frame. The grip portion of the frame has mostly gone to a light patina. There are a few light marks, scattered light surface oxidation and some solid erosion, in about Good-plus condition.

Finish Originality: These guns were unfinished (in the white). The buttplate is a replacement part.

Box, Paperwork & Accessories: Included is a copy of “The Liberator Pistol” by Ralph Hagan, two 20-round boxes of .45 ACP ammunition and a reproduction instructions sheet is included. The book shows light storage wear. One box of ammunition has a Frankford Arsenal label and has been opened, with all of the cases having 1942 headstamps. The other box of ammunition has a Western Cartridge Company label and is still sealed.

Our Assessment: Everyone wants one of these and the only thing to turn off collectors lately is the flooding of the market by VOCO Reproductions. This one, apart from the replacement buttplate, is REAL. Your best reference is Man At Arms, Vol. 35 No. 2, April 2013 – page 39. All features confirming originality are found on this pistol: 1) Poor welding on the top of the breech, 2) lack of manufacturers markings, 3) lack of serial number, 4) poorly cast cocking pieces, 5) .450 bore diameter (reproductions had a groove to groove diameter of ,454) – this is a guaranteed original Liberator and one of the few we’ve seen.

This example is in decent shape and would be a great addition to any WWII small arms collection. It comes with a reference book specifically about the Liberator pistols as well as with some vintage ammunition which will display well with the pistol. Please see our photos and good luck!