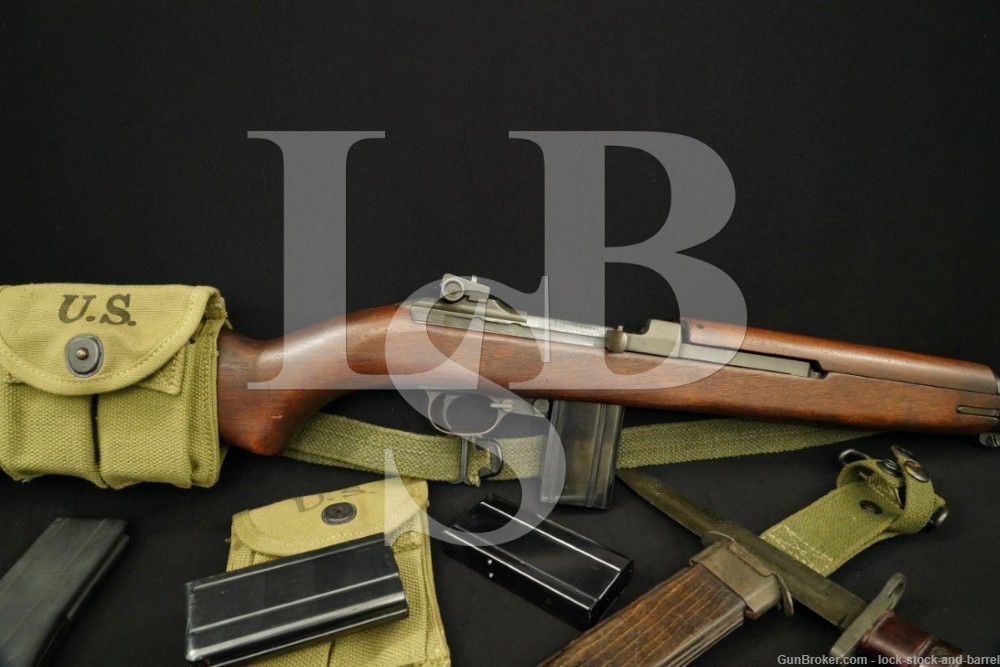 Stock Configuration & Condition: The hardwood stock has a pistol grip, Type III barrel band with sling loop & bayonet lug, sling well, sling pass through, and a metal buttplate. The buttplate shows scrapes, small scratches, and discoloration from oxidation. The wood shows several small scrapes and scratches. Some have damaged small portions of the surface wood. Most of these marks have been oiled. The LOP measures 13 ? inches from the front of the trigger to the back of the buttplate. The stock rates in about Very Good Plus overall condition.

Bore Condition: The muzzle & grooves are gray. The riffling is deep. There is fouling and intermittent erosion at the muzzle and in the grooves. The bore shows an M.E. of 2.5.

Overall Condition: This rifle retains about 85% of its metal finish. The metal shows scrapes, small scratches, and light thinning on the leading edges of the metal. The barrel shows discoloration from oxidation and a spot of light surface erosion. The right side of the receiver and bolt show thinning consistent with cycling. Most of the markings are well defined. The markings at the front of the barrel are faded. Overall, this rifle rates in about Very Good condition.

Mechanics: The action functions correctly. We did not fire this rifle. As with all used firearms, a thorough cleaning may be necessary to meet your maintenance requirements.
The bayonet mounts the rifle properly.

Our Assessment:  The M1 Carbine was developed and produced after WWII started. Over 6 million were made by a number of U.S. companies to assist with the all out war effort. The M1 Carbine was widely issued to U.S. Military Forces which numbered over 16 million during WWII. The M1 Carbine contributed greatly to U.S. efforts during WWII.
The International Business Machines Corporation (IBM) was one of several contractors who tooled up during WWII to produce M1 Carbines in support of the war effort. IBM only produced about 5.7% of the total number of WWII M1 Carbines. IBM’s low production numbers make IBM M1 Carbines quite desirable.
This IBM M1 Carbine was made back in 1943. It has been rebuilt but still retains several of its original IBM parts including its IBM marked barrel. This wartime military rifle is over 75 years old and is still in Very Good condition. It should keep you smiling out at the range.  It comes with three 15 round magazines, a 30 round magazine, 2 mag pouches, and a non USGI M4 style Knife Bayonet & Scabbard. Good luck.