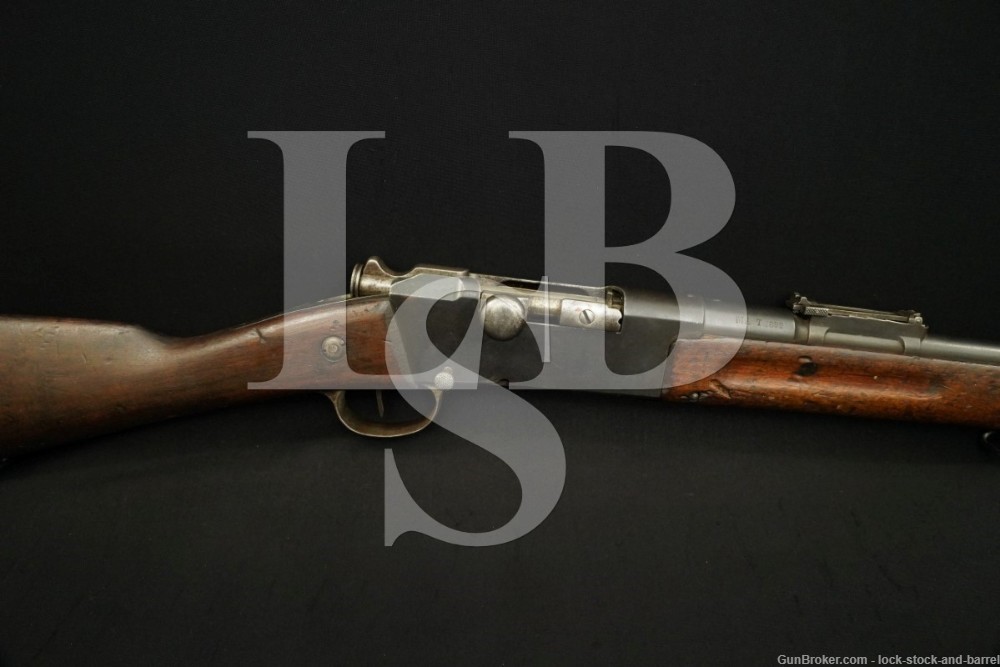 Sights/Optics: The front sight is a thick blade set atop a small base dovetailed into the barrel. The rear sight is a square notched sliding escalator when down. The left side of the sight base is marked “2 4 6 8 10”. When up it becomes a sliding sight ladder.

Stock Configuration and Condition: The stocks are two-piece smooth wood with forend cap/bayonet mount (no bayonet is included), finger-grooved forend, through bolt, straight grip, straight comb, and metal buttplate. Edges of the forend have light nicks, dings, and light scrapes throughout. Either side of the buttstock has a few moderate dings along with intermittent compressions. The buttstock has light nicks, dings, and scuffs throughout. There are no chips or cracks. The LOP measures 13 1/4” inches from the front of the trigger to the back of the buttplate. The buttplate has gone to white and has light nicks and dings throughout. Overall, the stock rates in Good-plus condition, as antique.

Bore Condition: The bore is rather dark but has well-defined rifling. There appears to be minor erosion and moderate stubborn fouling throughout.

Overall Condition: This rifle retains about 50% of its metal finish. All metal surfaces have begun the transition to a dark patina. The edges of the receiver and the barrel bands have light thinning on the edges. The receiver has light pitting from surface erosion throughout along with intermittent minor nicks and a few minor dings. The barrel has scattered light nicks along the top. Screws are lightly tool marked with strong slots. Markings are clear. Overall, this rifle rates in Good-to-Very Good condition, as antique.

Our Assessment: Developed by a team of French Military arms designers including the man for whom the cartridge the rifle fires wa named—Lebel—the 1886 was designed and brought into use in just five months. And while it is called the M1886, it was not put into service until early 1887. This is a rather rare MLE 1886 that has not been modified into the M93 configuration that saw a new bolt head designed to redirect dangerous gasses escaping from ruptured cases. This example does show its age with heavy wear on the stock, but most of its finish. The bore is quite worn, but has good rifling. Good luck and happy bidding!