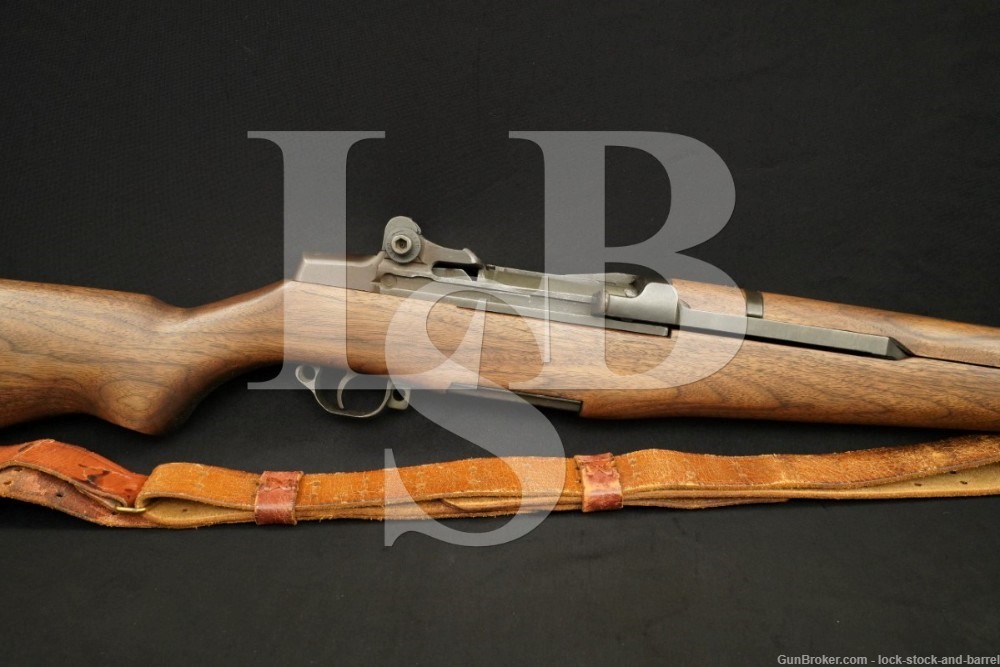 Sights / Optics: The front sight is a blade set between two protective wings. The rear sight is a fully adjustable aperture sight set between two protective wings.The windage knob is marked “LEFT arrow” twice. The elevation knob is marked from “2-12” in increments of two and “UP arrow DOWN arrow / BATTLE triangle RANGE”. The rear sight lock bar has been replaced with a knurled locking nut.

Stock Configuration & Condition: The hardwood stock has a pistol grip, metal nose caps, stacking loop, two sling loops and a replacement metal buttplate. There are 2 storage holes milled into the rear of the stock, under the buttplate. The buttplate shows scrapes and surface erosion. The wood shows light handling marks. The LOP measures 13 ¼ inches from the front of the trigger to the back of the buttplate. The stock rates in about Fine overall condition. It would rate higher if the buttplate was replaced.

Bore Condition: This M1 Garand uses a 2 grooved restored barrel. The barrel is a Model 1903 barrel mated to the rear of an M1 Garand barrel. The bore is bright; semi bright near the muzzle. The rifling is sharp. There is fouling and oxidation near the muzzle. The fouling should clean up some. The bore shows an M.E. of -0.5 (negative 0.5). The throat shows a T.E. of 2.

Overall Condition: This rifle retains about 93% of its metal finish as refinished. The metal shows scuffs, light scrapes, and areas of light discoloration. The receiver has scratches and areas of surface erosion showing through the new finish. The rear of the barrel shows surface erosion. The markings are well defined. Overall, this rifle rates in about Very Good Plus condition as restored.

Mechanics: This rifle has been restored. The receiver has been re-welded and the barrel has been fused. Have a gunsmith determine if the rifle is safe to fire regularly.
The action functions correctly. We have not fired this rifle. As with all previously owned firearms, a thorough cleaning may be necessary to meet your maintenance standards.

Box, Paperwork & Accessories: The rifle has a leather sling attached. It shows scrapes, discoloration, surface cracks, and flecks of paint on the leather. It shows light scrapes & light oxidation on the buckles. It is in about Very Good condition.

Our Assessment: The U.S. Rifle, Caliber .30, M1 is known affectionately as “the Garand” after its inventor, John Garand. The rifle would become the first standard-issue semi-automatic infantry rifle in the world. While some countries entered the war with limited issued semi-automatic rifles or developed such rifles during the war, America was the only nation to enter with its Army issuing autoloading rifles on a large scale. General Patton famously referred to the rifle as “the greatest battle implement ever devised”. Millions were produced during WWII and hundreds of thousands afterward, seeing use through the Korean War and into the Vietnam War. Interestingly, while many other weapons and military items would see production contracts sent out to otherwise non-related companies, during WWII production remained with Springfield Armory and Winchester. It was only after WWII that production would be contracted out to another gunmaker, Harrington & Richardson, as well as the agricultural equipment maker, International Harvester.
This Winchseter M1 Garand was originally made back in 1943. Sometime after WWII it was de-milled and imported into the U.S. as parts. The receiver has been re-welded using Springfield and Winchester receiver parts. The barrel is a Model 1903 barrel mated to the rear of an M1 Garand barrel. This restored rifle has been refinished and set into a new production M1 Garand stock. It looks good and should do well at the range.