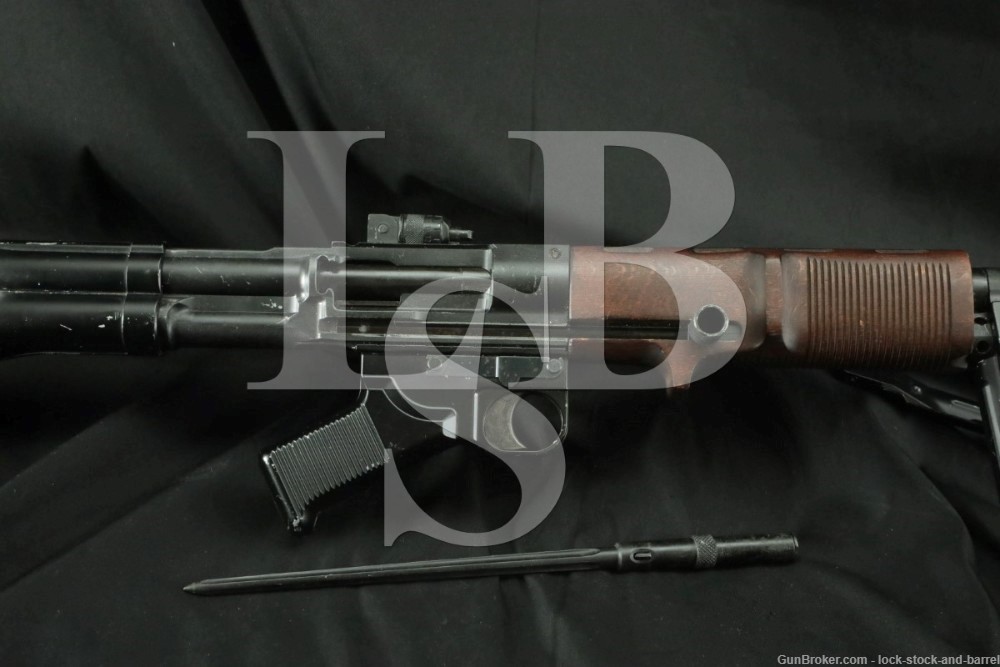 Stock Configuration & Condition: The forend is one-piece serrated wood, the grip is serrated black metal with a severe angle, typical of the Type I FG42s, integral to the trigger assembly, and the buttstock is a stamped metal (does not attract a magnet) with reinforcing ribs and serrated butt which attaches to the rear of the receiver via a spring-clip, released by a button on the right side. The forend has a few scattered nicks and scuffs, most notable on the bottom of the hand-stop toward the rear on the bottom. The serrations are well defined and there are no chips or cracks. The grip has a few light nicks and scratches, most notable at the bottom-rear on the right side. The buttstock has scattered light nicks, scuffs and scratches in its black paint finish, most notable at the heel and toe. The spring-clip which holds the buttstock to the receiver is weak and does not reliably keep the stock retained. The LOP measures approximately 14 3/8″ from the front of the trigger to the back of the butt. Overall, the stocks are in about Very Good condition.

Type of Finish: Black. Most parts do not attract a magnet, including the receiver, bolt and barrel.

Overall Condition: This non-firing replica retains about 93% of its metal finish. The balance is mostly in light operational and handling wear, there are a few scattered light nicks, scuffs and scratches. In addition to the weak spring-clip of the stock, the right arm of the bipod has had its retaining screw come free, partially stripped, and the right arm of the bipod is not properly attached. The markings are clear. Overall, this non-firing replica is in about Good condition.

Mechanics: The safe position does not properly prevent the action from being functioned. As noted above, the retaining spring for the buttstock does not function reliably and the right arm of the bipod is not properly secured. Otherwise, the action functions correctly and cycled a snap-cap properly during our function check. As with all used firearms, a thorough cleaning may be necessary to meet your maintenance requirements.

Box, Paperwork & Accessories: This replica comes with a spike bayonet installed under the barrel and a single 20-round replica magazine. The bayonet shows scattered light wear. During our function check of the magazine, it did not appear to be intended to properly hold or cycle 20 cartridges, though they could be loaded. Our research indicates that these typically shipped with five dummy cartridges. No magazine will be included for purchasers who reside where it cannot be legally transferred.

Our Assessment: The Fallschirmjägergewehr Model 1942, or FG-42, is one of the more advanced and well-recognized arms of WWII. Like many other German arms, it was the result of impossible requirements being nearly completely achieved too late and in too few numbers to alter the course of the war. Early in the war, German paratroopers would drop separately from their primary weapons. This led to problems when their weapons containers were dropped too far from the troops themselves, most notably in the Battle of Crete where the airborne invasion by the Germans was nearly repelled before amphibious reinforcements could be landed. It was determined that a new rifle was needed for the paratroopers, and requirements were sent out to create a “do-all” gun for the airborne troops. The request was for a rifle which was less than a meter in length, weighed the same or less as a Kar 98k, select-fire firing from an open bolt in automatic and from a closed bolt in semi-automatic, fed by detachable magazines, capable of accepting a telescopic sight and as accurate as a K98k. Rheinmetall-Borsig would win the contract over the other submission from Krieghoff, and so of course Krieghoff would receive the contract to produce the guns (no doubt due to Krieghoff’s friendship with Luftwaffe commander Hermann Göring). The rifle would go on to see some iterative improvement through the end of the war, and would even have some influence on post-war machine guns of other nations. This non-firing replica of a Type I FG-42 was made, somewhat ironically, in Japan by Shoei. The attention to detail in this replica is noteworthy, with the mechanism operating from a closed or open bolt and field stripping just like the originals. A spike bayonet, not unlike that of the French MAS-36, is installed under the barrel and the rifle has a folding bipod, though one leg will need some repair. These distinctive replicas are no longer in production and are becoming quite collectible in their own right. This example has some light wear which, if anything, makes it appear even more authentic. Given the difficulty (not to mention the cost!) of acquiring an original FG-42 or even some of the semi-automatic versions made today, this Shoei replica will make a nice addition to a collection or display. Please see our photos and good luck!