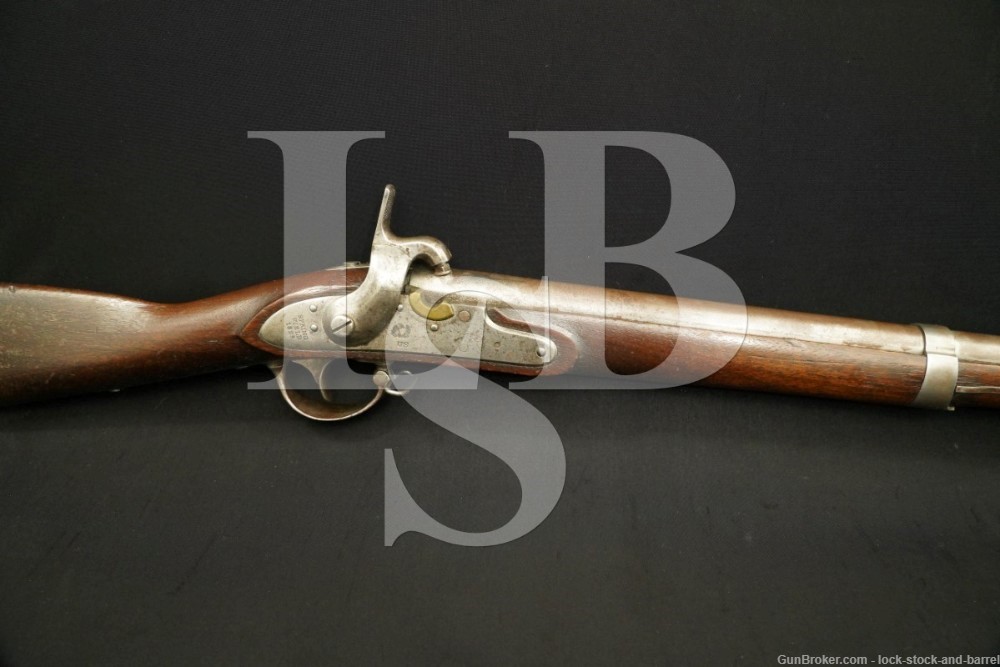 Year of Manufacture: 1829, with conversion taking place sometime in the period between 1848 and 1860.

Stock Configuration and Condition: The stock is a one-piece walnut with button head ramrod, iron mountings, three barrel bands, straight grip, straight comb, and steel buttplate. There are sling swivels forward of the guard and on the center barrel band. The wood has light-to-moderate nicks, dings, scuffs, scrapes, and compressions throughout, but most pronounced along edges. The LOP measures approximately 13 1/4” from the front of the trigger to the back of the plate. The plate has light surface oxidation throughout along with light nicks and scuffs. Overall, the stock rates in Good-plus condition, as antique.

Bore Condition: The bore is dark with light-to-moderate erosion throughout.

Mechanics: The action functions correctly. We have not fired this musket. As with all previously owned firearms, thorough and consistent cleaning may be necessary to meet your maintenance standards.

Our Assessment: Join us in the year 1829, the year Andrew Jackson was sworn in as the seventh President of the United States, the year Chester A. Arthur, the twenty-first President of the United States was born, and the year this firearm began its life as a Springfield Armory Type II Model of 1816 Flintlock Musket. Thirteen years later, an overall decision was reached to cease all flintlock production, and move forthwith to the more reliable percussion technology that saw use nigh on a century. 1942 saw the US setting out to assess which examples from the flintlock arsenal were suitable for conversion to percussion and in 1948 more than seven hundred thousand flintlock muskets were converted to percussion muskets. There were three basic types of conversion: “Bolster”, “French Style (Side-Lug)”, and “Belgian Style (Cone Type)”. This example is the “Cone Type”, notable for its distinct hammer and the percussion nipple set directly into the barrel, just to the right of center. Flintlock hammers were removed, as was the frizzen, frizzen spring, and the pan was filled in with a brass notch. All this made for a simpler weapon whose operation still had several steps, but certainly less points at which failure could occur. It is endlessly fascinating the iterative process by which American arms were upgraded and made new, and this is no exception. This example is in overall Good-plus condition, and it’s no surprise given its intended use and service life. That this musket is whole is a bit of a victory, and all wear present speaks to 192 years of use. Good luck and happy bidding!