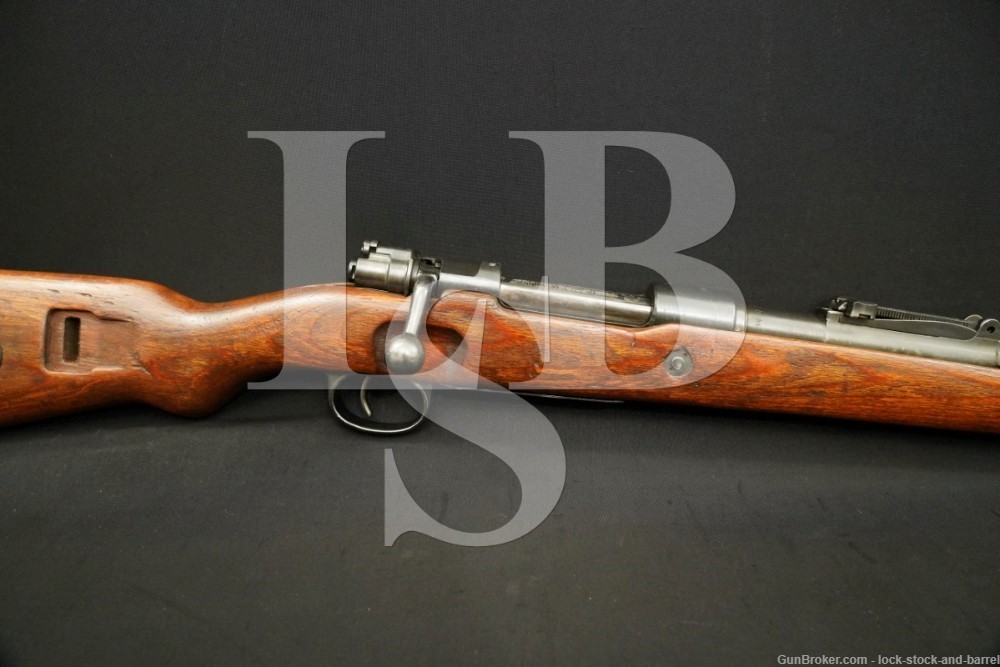 Stock Configuration & Condition: The two piece laminate stock stock has a pistol grip, scallop for the bolt handle, nosecap with bayonet lug, barrel band with sling bar, through bolt, sling well, sling pass through, domed washer, and a metal buttplate. The refinished buttplate has surface erosion showing through the finish. The wood shows numerous scrapes, scratches, and compression marks. Most of these marks have been oiled. Several of the marks have damaged small portions of the surface wood. The LOP measures 13 inches from the front of the trigger to the back of the buttplate. The stock rates in about Very Good overall condition.

Bore Condition: The muzzle & grooves are gray. The rifling is deep. There is erosion present. The erosion is more prominent in the grooves.

Overall Condition: This rifle retains about 90% of its metal finish as refinished. The metal shows several light scrapes, small scratches, and handling marks. The bottom metal shows thinning and scratches. The screw heads show use. Most of the markings are well defined. A few of the receiver markings are slightly faded.  Overall, this rifle rates in about Very Good Plus condition as refinished.

Mechanics:  The action functions correctly. This rifle was made without a safety. We have not fired this rifle. As with all previously owned firearms, a thorough cleaning may be necessary to meet your maintenance standards.

Our Assessment: This German Mauser K98 was made at the Waffen Werke Bystrica factory which was located in Nazi occupied Slovakia during WWII. This Mauser was captured and rebuilt by the Russians. It has since been refinished. The receiver is stamped with Nazi “eagle / swastika” marks as well as 2 Russian Capture marks. This tough Nazi marked Mauser has some history. It will add to your WWII collection and can still put lots of 8mm downrange. Good luck.