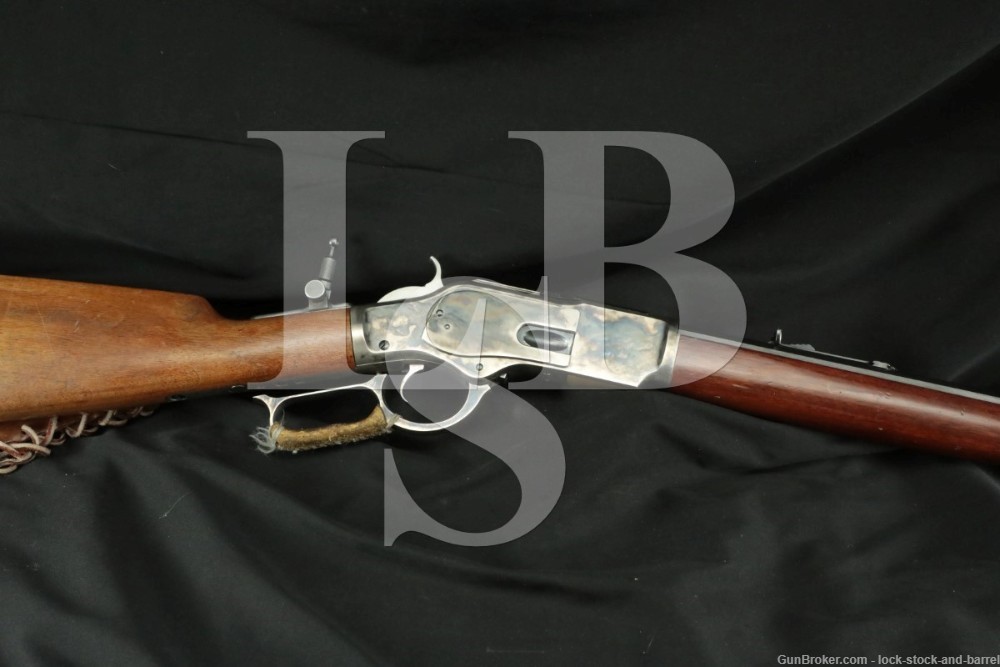 Barrel Length: 20” Octagonal, a recessed target crown has been cut in the muzzle.

Stock Configuration & Condition: The stocks are smooth wood with a capped forearm, straight grip and comb, and a carbine style steel buttplate. The buttstock does not appear to be original to the gun. The buttstock has been cut and a segment of wood has been added to increase the length of pull. The wood shows several nicks, dings, and small scratches throughout. The finish on the back half of the buttstock shows wear from contact with the leather buttstock sleeve. There are no chips or cracks. The LOP measures 15 1/8” from the front of the trigger to the end of the blued buttplate. The plate has leather protector adhered to it. The stocks rate in about Very Good overall condition as modified.

Finish Originality: Original Finish, some parts have been replaced.

Overall Condition: This gun retains about 87% of its metal finish. The case color on the receiver has slightly muted on the sides and bottom; it has gone nearly completely mute on the lower tang. There is light thinning on the leading edges of the barrel. The barrel also shows a small amount of scattered light surface oxidation, light nicks and scratches, and a small spot of finish loss on the top of the barrel midway. There is light-moderate operational wear. The screw heads are sharp. The markings are clear. Overall, this rifle rates in about Very Good condition.

Mechanics: The action functions correctly. The lever has been short stroked and action work has been done, likely for competitive shooting. The original brass lifter has been replaced with an aluminum lifter. The lever safety is present, the lever lock has been removed. We have not fired this rifle. As with all previously owned firearms, a thorough cleaning may be required to meet your maintenance standards.

Box, Paperwork & Accessories: A stock sleeve is included with this rifle.

Our Assessment: The Model 1873 was one of the most successful Winchester rifles of its day, with Winchester marketing it as “The Gun That Won the West”. Still an icon in the modern day, it was manufactured between 1873 and 1923. It was originally chambered for the .44-40 cartridge, which was the first centerfire cartridge and which became immensely popular. The 1873 was later produced in .38-40 and .32-20, all of which later became popular handgun cartridges of the day, allowing users to carry just one type of ammunition. Uberti is known for making quality reproductions of classic firearms. This repro is chambered for .357 Magnum and it is quite obvious that this rifle has had some work done to it. The lever has been short stroked and is light and silky smooth. The stock has been modified, giving it a 15 1/8” LOP. With wear consistent with competitive shooting, this rifle has plenty left to offer. Please see our photos and good luck!