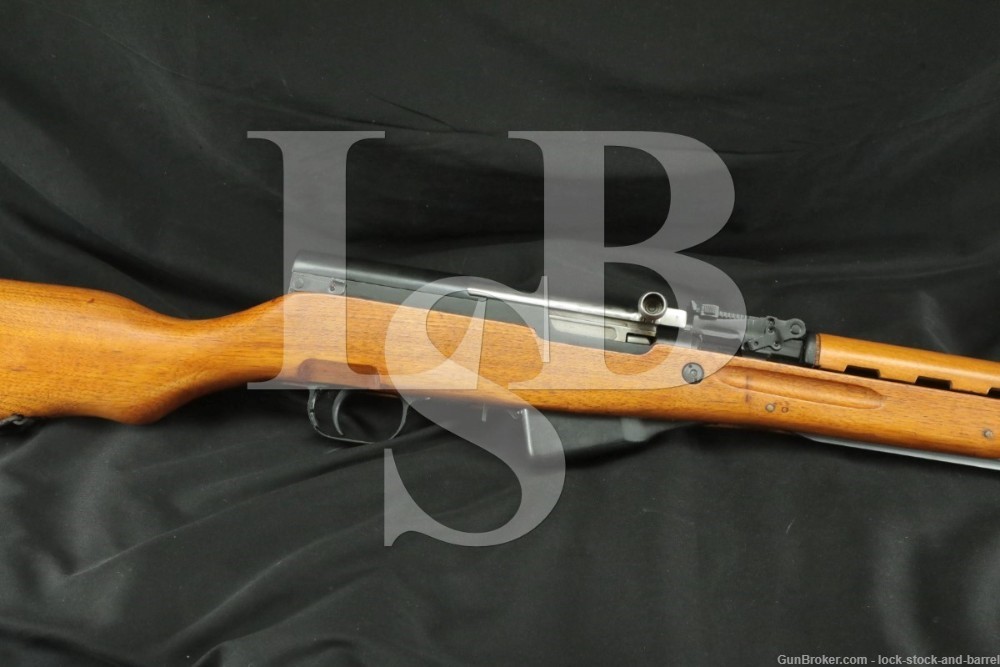 Markings: The left side of the receiver is marked with a /26\ arsenal marking, three Chinese characters that translate to TYPE 56, the serial number “10054476”, and an import-mark “SKS 7.62 CHINA / CJA SOUTHFIELD MI.”. The rear of the receiver cover, the left side of the bolt, the top of the bolt carrier, the bottom of the magazine cover, and trigger guard are all serial matching, marked with a partial of the serial-number, “54476”.

Sights/Optics: The front sight is an adjustable hooded post. The rear sight is a Russian style “U” notch sliding escalator marked from “1-10” ascending and “-n-” at the base.

Stock Configuration and Condition: The stock is a two-piece smooth wood with ventilated handguard, grooved forend, semi-pistol grip, straight comb, sheet steel buttplate with a cleaning kit trapdoor (kit included), sling swivels mounted on the underside of the buttstock and gas cylinder tube guard, forend mounted cleaning rod, and a cutout for the included folding spike bayonet. The buttstock has a few light nicks, compressions, and dark spots, most of which are on the either side of the buttstock and the butt end along the edge. There are no chips or cracks. The LOP measures approximately 12 3/4” from the front of the trigger to the back of the buttplate. The buttplate has scattered minor scuff wear and some minor surface oxidation. Overall, the stock rates in Fine condition.

Bore Condition: The chrome lined bore is mostly bright and the rifling is sharp. There is no erosion, but light stubborn fouling persists intermittently along the grooves.

Overall Condition: This rifle retains about 94% of its current metal finish. The barrel and gas tube have scattered minor nicks most notable on the top of the barrel. The receiver and action have light operational wear. Upper edges of the receiver have intermittent minor nicks. Screws and bolts have light tool marks with usable slots, and all markings are clear. Overall, this rifle rates in Fine condition, as arsenal refinished.

Mechanics: The action functions correctly. We have not fired this SKS rifle. As with all previously owned firearms, thorough and consistent cleaning may be necessary to meet your maintenance standards.

Our Assessment: The SKS is a ubiquitous rifle that has managed to stay in the employ of all manner of shooters for 77 years. Designed by legendary Russian small arms designer Sergei Gavrilovich Simonov, this rifle pattern has been produced by the millions—more than 15,000,000 by Russia, and more than 30,000,000 by China, where this particular example hails from. After the fall of the Soviet Union, SKS rifles were imported en masse by numerous companies looking to cash in. SKS rifles would become very popular with American customers due to their low price and easy-to-procure ammo. One would purchase an imported Chinese SKS for less than $100 at the time and could score a wooden crate of ammunition—one thousand rounds—for only slightly more. Importation of these rifles was banned for 10 years thanks to Bill Clinton, were later unbanned thanks to the sunset provision, and as such prices have risen and they have fallen and they have risen again… thanks to the pandemic. In overall Very Fine condition, this “Paratrooper” SKS was produced in 1965 and was later refashioned for American sales. Note the shortened barrel, repositioned front sight, modified bayonet groove, and shortened spike bayonet. It still looks rather good in hand thanks to that later factory refinishing. The chrome-lined bore is as good as new apart from a bit of really stubborn fouling, and mechanics are still tip-top. The SKS is a simple machine and is ready for use immediately should you be fortunate to place the winning bid. Good luck!