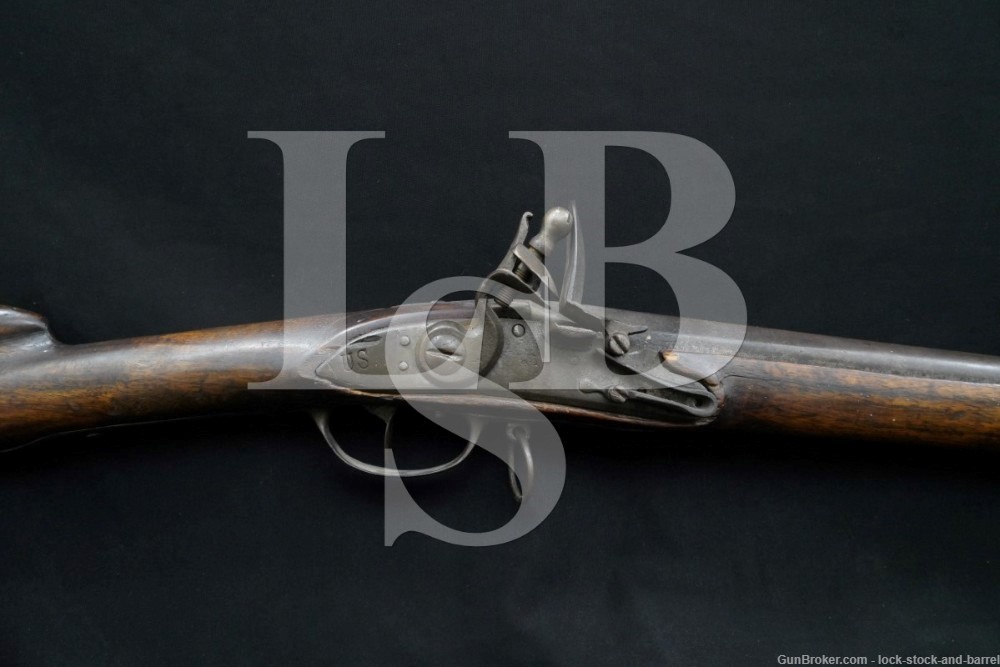 Year of Manufacture: Circa 1763

Markings: The rear end of the lock plate behind the hammer is marked “US”. The top of the chamber is marked with a faded “US” with “01” stamped over it and what appears to be the manufacturer’s mark “INC” with a crown above the “C” (the marking is faded). The left side of the chamber features what appears to be a French marking: “L” on the left side of a faded Fleur de Lis with what looks like a “C” on the right. The belly is marked “U. STATES”. The bottom tang is marked “CH”.

Sights/ Optics: There is a bayonet lug at the muzzle end of the barrel which can be used as a sight.

Stock Configuration & Condition/ Grip: The stock is one-piece wood featuring a forend cap with a slot for the included ramrod, two barrel bands, a lock-plate, straight wrist, straight comb and metal buttplate. The bottom of the center barrel band features a sling swivel as does the front tang of the trigger guard. The stock has compressions, nicks, scuffs and handling marks. Notably, the right side of the forend by the cap has a crack, there is a crack at the bottom of the forend between the front tang and rear barrel band, there is a crack just ahead of the lock plate in addition to crack above it, there is a light crack both in front and behind the side plate and there is a crack on the right side of the wrist. There is also a patch of wear around the rear barrel band. The LOP is 13.75” from the trigger to the rear end of the buttplate. The buttplate is coated in oxidation and has some handling wear. Overall, the stock is in Fair-Good condition for an Antique.

Bore Condition: The bore is grey. There is erosion throughout the bore.

Overall Condition: The musket has no metal finish. The metal parts of the musket are coated in oxidation and it has taken a patina color. There are scuffs, nicks and handling marks on the rifle’s metal surfaces. The markings remain clear. The screwheads remain serviceable. Overall, the rifle is in Good condition for an Antique.

Mechanics: The action functions correctly. We have not fired this musket. As with all previously owned firearms, a thorough cleaning may be necessary to meet your maintenance standards.

Our Assessment: This appears to be a French Charleville Model 1763 from the American Revolutionary War era which was converted into a muzzle-loaded flintlock shotgun. The French Charleville was the country’s standard issue rifle from 1717 until the 1840s with a number of variations produced throughout its long service. When England’s North American colonies rebelled against the crown Paris saw an opportunity to avenge its bitter defeat during the Seven Years War. The French government began to supply the American Revolutionaries with military equipment including a significant number of Charleville muskets, in no small part thanks to the tireless efforts of General Lafayette who would go on to command American troops during the conflict. Eventually French forces landed in North America to help the Continental Army defeat the British. During the war the Continental Congress was concerned about the theft of Continental Army supplies and mandated that all weapons belonging to the United States be marked as such. Thus, many muskets were marked to indicate that they were property of the United States. This specimen has some handling wear but the action remains functional and it retains much of its original charm. This musket was converted into a shotgun, retaining the signature bayonet lug. These conversions were done in the field during the late 18th-early 19th centuries so that soldiers could hunt game (muskets were simply not as effective). There were no MREs at the time, and foraging (living off the land) was an integral part of military life for much of history. It was also not uncommon for an American who had a rifle at home to convert a musket for fowling use. This is a unique piece of American military history that you do not want to miss out on!