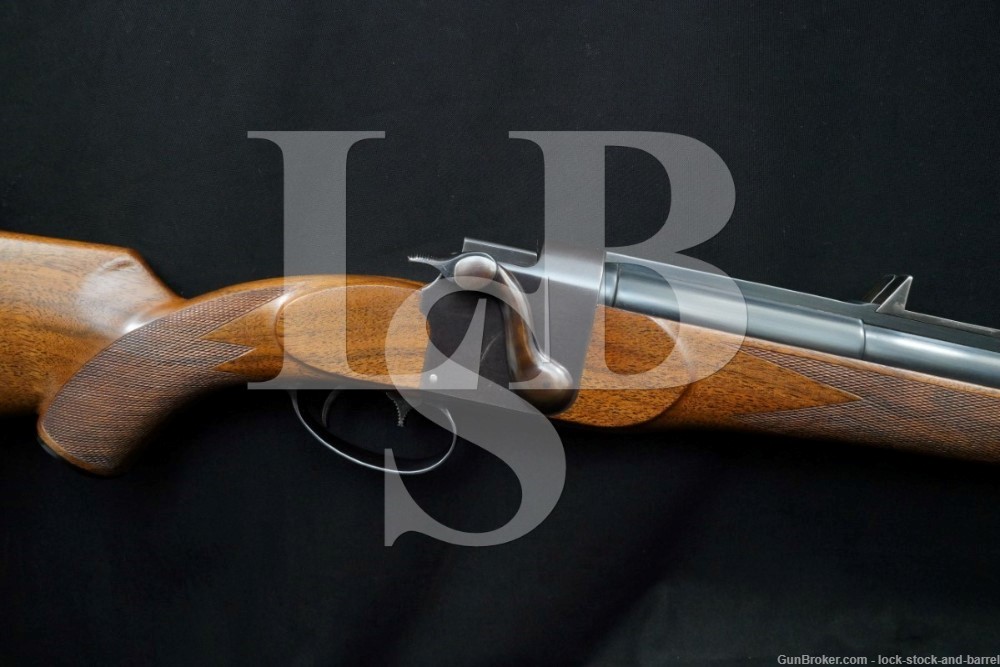 Sights / Optics: The front sight is a brass-beaded blade dovetailed to a ramped, banded base fixed to the front of the barrel. The ramp is serrated for glare reduction. The rear sight is a fixed, Express-style “V”-notch with a vertical line aiming reference dovetailed to the barrel’s quarter-rib. The rear portion of the rib and the top of the receiver are serrated for glare reduction.

Stock Configuration & Condition: The stocks are two-piece checkered walnut with schnabel-tip forend, capped pistol grip, straight comb with cheekpiece, brown rubber Decelerator buttpad and a sling stud in the belly (there is another sling attachment point mounted to a barrel band in front of the forend). The stocks have a few scattered minor nicks, scuffs and scratches. At the bottom-rear of the forend, there are thin tool-runs at the corners where the forend has been shaped to match the receiver profile. The checkering is sharp. There are no chips or cracks. The LOP measures 13 3/4″ from the front of the trigger to the back of the pad, 12 3/4″ to the back of the wood. The pad has some light wear, but is still supple. Overall, the stocks are in Fine-plus condition.

Overall Condition: This rifle retains about 97% of its metal finish. There is some scattered faint scuffing and light handling marks. The rear sight and lever show slightly mottled coloring. The action has a plum hue, likely due to different steel alloy and/or heat-treat than the barrel assembly. The action shows light operational wear, most notable an arc of wear on the right receiver flat from the lever. The screw heads range from sharp to lightly tool marked with strong slots. The markings are clear. Overall, this rifle is in Fine-Excellent condition.

Mechanics: The action functions correctly. The safety is a switch inside the trigger guard, in front of the trigger. The trigger is crisp. We did not fire this rifle. As with all used firearms, a thorough cleaning may be necessary to meet your maintenance standards.

Assessment: John Mitchell, owner of Classic Rifle Co. appears not to have needed much in the way of promotion, never having had a website to promote his business and with little information available other than recommendations and testimonies of those who have had him build their rifles. It appears that his work speaks for itself and he is well known among avid single shot rifle shooters. Most references we could find related to him building mirror-image Sharps action rifles for left-handed shooters, but it is clear that he would build single shots with varying actions and this is one such example. Made with a Daniel Fraser patent action, the rifle is opened using a lever on the right side of the receiver, an elegant and simple design which was popular in the late 19th and early 20th centuries. This example is chambered for the .600 Nitro Express. Able to push a 900 grain projectile to 2,000 fps, it was the most powerful commercially available cartridge from its introduction in 1899 until 1988 when it was surpassed by the .700 NE. While this round is most strongly associated with elephant hunting, it did see notable use in the Great War when rifles chambered for .600 NE were used by the British to punch through armor plates being used to protect German snipers. According to reports, while the projectile may not always puncture the steel plate, it would “stove it in”, and probably require that the Germans behind it change their pants. This big game rifle is beautiful and well made, ready to head out on safari. Please see our photos and good luck!