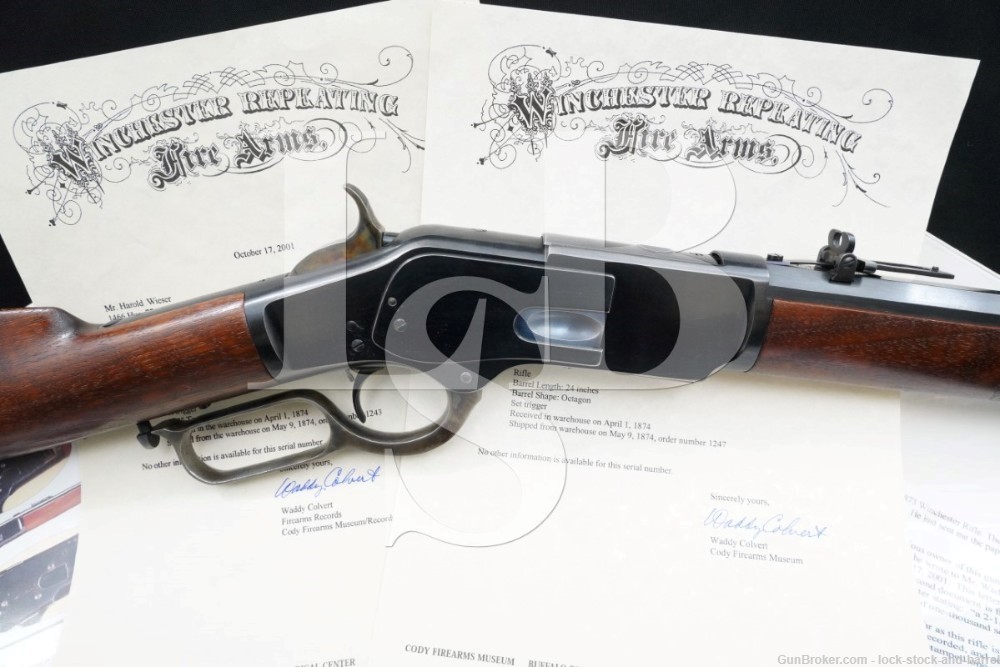 Sights / Optics: The front sight is a german silver blade in a slotted base dovetailed to the front of the barrel. The rear sight is a folding “Henry” style sight which presents a semi-buckhorn with a fine “V”-notch when folded down. When folded up, a ladder-style sight is presented with a “V”-notch slider. The ladder’s graduation marks are worn, but appear to go from “2” to “8” and there is a “V”-notch on the top edge of the ladder. The top tang is drilled, tapped and filled for a peep sight (none included).

Stock Configuration & Condition: The stocks are two-piece smooth walnut with a steel forend cap, straight grip, straight comb and case-hardened steel crescent buttplate with sliding door over a storage compartment. The stocks have some scattered minor nicks, scuffs and scratches (typical of a Roger’s restored gun, see Our Assessment). There are no chips or cracks. The LOP measures 12 5/8? from the front of the trigger to the back of the buttplate. The plate has generally strong case color with some areas showing slight muting and some scattered minor surface erosion. The brass cover for the storage compartment has a mustard patina. Overall, the stocks are in about Excellent condition as Antique and not original to the gun.

Finish Originality: Professionally Restored by Roger Kurtz of Roger’s Restorations. The links, magazine tube, magazine bracket, front sight and a few small screws have been replaced in addition to the stocks.

Bore Condition: The bore is gray with well defined rifling. There is scattered light-moderate erosion and some pitting throughout the bore.

Overall Condition: This rifle retains about 96% of its current metal finish. The finish is lightly thinning at most edges. Most of the balance is scattered tiny spots of minor surface oxidation. There is infrequent minor erosion, most notable on the lever loop. The action shows light operational wear. Otherwise, there are only light handling marks. The screw heads range from sharp to lightly tool marked with strong slots. The markings are generally clear, the top tang marking is shallow, but legible. Overall, this rifle is in Excellent condition as professionally restored Antique.

Mechanics: The action functions correctly, including set-trigger. The trigger is set by pushing forward until it clicks. Then the trigger is very light and crisp. There is a dust cover mounted in a mortise integral to the top of the receiver with a raised, checkered thumb-pad, typical of the 1st Models. We have not fired this rifle. As with all used firearms, a thorough cleaning may be necessary to meet your maintenance standards.

Box, Paperwork & Accessories: This rifle comes with a four-piece cleaning rod stored in the buttstock and a series of documentation including Winchester Records letters from the Cody Firearms museum, notes and copies of correspondence between a previous owner and Roger Kurtz, invoice documents from Roger’s Restorations, a series of “before” photos of the rifle in its original condition, as well as printouts with illustrations showing the changes in features of the 1873 throughout its production. The Winchester Records letters confirm that this rifle was received in the warehouse April 1, 1874 and shipped May 9, 1874 on order 1243 and the rifle was shipped as a 24″ Octagonal barrel rifle with set trigger. It also notes “2 1/2″ Target” which will be addressed below in Our Assessment. Original parts are included which were replaced, including links, front sight, magazine bracket and a few small screws.

Our Assessment: One of the most successful, and certainly one of the most famous Winchester rifles was the Winchester Model 1873, known as “The Gun that Won the West” for its predominant role in the hands of Western settlers. The successor to the revolutionary 1860 Henry and the improved Model 1866, the Model 1873 had a steel frame that was much stronger than the ’66, allowing Winchester to develop a family of powerful new cartridges, with Colt usually producing Single Action Army revolvers in the same calibers shortly after they were developed. The .44-40 Win. cartridge, also known as the .44 WCF, was introduced by Winchester in 1873 as Winchester’s first metallic centerfire cartridge with a number of WCF cartridges to follow. Colt produced single action revolvers chambered for the Winchester cartridges as well, allowing users to have a rifle and handgun which shared the same ammunition. The 1873 has a mythic status among both firearms enthusiasts and fans of the Old West in general, even inspiring the 1950 movie “Winchester ’73” starring Jimmy Stewart. This example is in absolutely exquisite condition, with vibrant case color, strong bluing, and gorgeous stocks. The quality of the restoration, as well as the attention to detail in providing a hint of wear, proper features, and even a flame-blue loading gate are all hallmarks of the man performing the work, Roger Kurtz of Roger’s Restorations. Truly an artist, Roger is known for restorations which do not make a rifle look as if it is brand-new, but rather to make the rifle appear as an extraordinarily high-condition original. He has been so successful at this that he places an unobtrusive marking on the tang of the gun, concealed by the stock, to prevent unscrupulous characters from passing off his work as a genuine original Winchester, which it easily could! This rifle is not only beautiful, but well documented, coming with not only Winchester Records letters, but also correspondence to Roger Kurtz and photos of the rifle before the restoration process. The Winchester letters also include a fascinating notation, “2 1/2″ Target”, a reference to a common Winchester practice that would go on to become something of a Holy Grail to collectors. Winchester routinely tested their barrels to see how tightly they could group, and those which provided the absolute best performance would be set aside for their “1 of 1,000” rifles, with those just under this threshold being designated “1 of 100”. This practice was in place prior to the introduction of these designations in 1875, and it appears that this rifle was able to produce a 2 1/2″ group during the test-firing. This rifle would be a wonderful addition to even advanced Winchester collections. It deserves a spot next to its 1866, 1876, 1886, 1892 and 1894 cousins. Please see our photos and good luck!